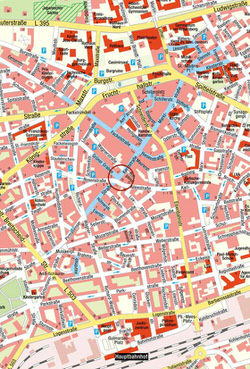 Interactive maps of hiking and biking routes around Kaiserslautern

1. You can zoom in/out using your mouse wheel, as well as move the map of Kaiserslautern with your mouse.
2. This interactive map presents two modes: 'Biking Routes' and 'Hiking Routes'. Use the '+' button on the map to switch between them.

This Kaiserslautern map has two modes: 'Railway Network' and 'Landscape & Rural Map'. Use the '+' button on the map to navigate.

Our guide to Kaiserslautern

Gartenschau Park is an amazing place that can offer entertainments for any taste. Charming summerhouses, benches conveniently located in the shadow of trees, comfortable paved paths, athletic fields and playgrounds for children, and various decorations make this park a wonderful place for the whole family. Decorations in Gartenschau deserve a separate mention – dinosaurs of different types and sizes, butterflies, … Open

Besides traditional cuisine, Kaiserslautern can offer more experimental menus. For example, Safari Restaurant is a unique dining venue that serves African food and drinks. Tourists particularly praise exotic drinks, such as incredibly delicious fruit beer and unique cocktails. The serving is no less eye-catching – all food is not only delicious but also looks fabulous and deserves to be photographed. The décor … Open

Perhaps, American soldiers who do military service at the base were the reason why Halloween has become such a popular holiday in Kaiserslautern. It is traditionally celebrated at the end of October. This is the time when numerous fair trades appear in the city, shops become filled with products for this holiday, and local people dress like monsters and witches. Parks and restaurants in Kaiserslautern host … Open

Kaiserslautern for children - what to visit

Volkspark is also an interesting and attractive place. One of its main decorations is a lake in which very nice ducks live and children will definitely like to feed them. The park is perfect for hiking and cycling. Many interesting sculptures and landscapes can be found on its territory. There are also spacious glades in the park where one can play active games or have a picnic. In the warm season, there are many … Open

Marco's Moden is an original shop that sells female clothes and shoes of plus sizes. This is the right place for ladies who want to look trendy and elegant, but sometimes have trouble finding the right size. Despite the popularity, the prices are always very attractive. Attractive denim pants usually cost less than 20 euro, and a gorgeous summer dress can easily cost 15 euro. Peek & Cloppenburg remains one of … Open