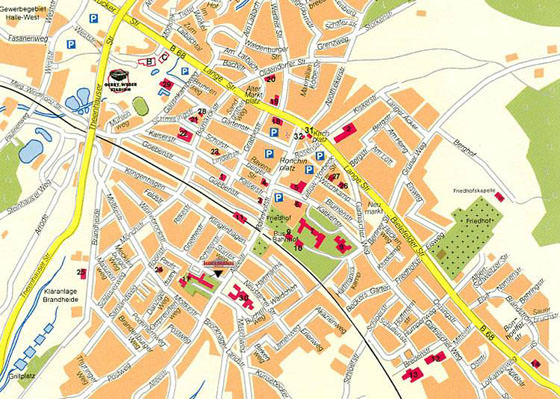 Search for services, infrastructure and sights on map of Halle an der Saale

Our guide chapters over Halle an der Saale

Although Halle is not the best city for shopping, there are some interesting shops to visit. Most of them are located on Marktplatz where you can buy whatever your heart desires - souvenirs, food, hand-made products. For souvenirs, many go to Uni-Shop der Martin-Luther-Universität Halle-Wittenberg: Uni-Shop, and for sports goods to WOSZ Fan Shop GmbH. After a long day, the city invites travelers to visit spa … Open

Festivals and events in Halle an der Saale

At the end of September, Halle an der Saale is honored as a city rich in salt deposits through such a popular event as Salzfest. The venue is Marktplatz. In addition to the main event - the fair's opening - the audience can enjoy rides, workshops, presentations of traditional local crafts, and all this is accompanied by music. Of course, the holiday is not complete without children's laughter ringing and joy … Open

Detailed maps of neighbouring cities to Halle an der Saale