Preparing your trip to Erfurt: advices & hints - things to do and to obey 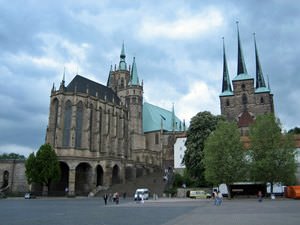 1.You can easily go from Erfurt to nearby towns. High-speed train will get you to Berlin, Frankfurt, Dresden and Dusseldorf in just 2 or 3 hours. Train tickets cost about 45 euros.
2. Travelers arriving to the local airport can get to the city center by tram route 4. You can also use taxi; it would be about 15 euros from the airport to the center.
3. Public transport in Erfurt is represented by an extensive network of buses and trams cruising throughout the city. The cost of a trip by public transport is about 1.5 euros; anyone can buy a ticket for one day, which costs 5 euros.
4. Tourists planning a rich program of rest are recommended not to go for a trip in June, as this month is considered as the rainiest. The warmest weather prevails in July and August; the average daily temperature is +23 C. The coldest month is February, but at this time, the temperature rarely drops below -4 C.
5. Almost all major stores and restaurants accept credit cards, so it isn’t necessary to carry a large amount of cash. You have to pay for goods and services in euros; currency can be exchanged in the bank or in specialized exchange offices. Copyright www.orangesmile.com
6. Fans of rock music will be interested in visiting the city in August, when the annual Highfield Festival is held. A significant part of its activities are carried out in the open air; all street concerts and performances are absolutely free.
7. The city has perfect cleanliness, so you have to throw garbage only in special boxes. There are special smoking areas close to all major shopping and entertainment centers.
Cuisine of Erfurt for gourmet with top restaurants and cafe
Erfurt is the real boon for fans of German food. There are countless restaurants and small stands offering famous German sausages, Bratwurst. It's not widely known that world's famous …

Open
8. Erfurt is a pretty calm city; however, travelers shouldn’t forget about basic measures of caution. Don’t leave personal belongings unattended and don’t go for a walk in remote areas of the city in the evening.
9. In restaurants and cafes it is appropriate to leave a tip for a good service; 10 - 15% of the total would be sufficient. Paying for taxi driver, you can round the resulting amount to any convenient sum.

Preparing your trip to Erfurt: advices & hints - things to do and to obey You can re-publish this content with mandatory attribution: direct and active hyperlink to www.orangesmile.com.
Erfurt - guide chapters 1 2 3 4 5

What to visit being in Erfurt - unique sights 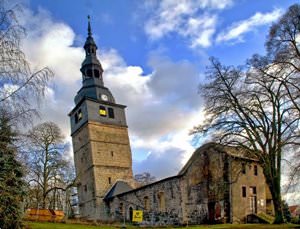 Distance from Erfurt center - 43.4 km.
Work on strengthening the foundation began in 1911. The church was reopened to the public soon after. However, the city authorities decided to demolish the historic building in 1925. The fact that the costs of its demolition and complete reconstruction were the same according to the estimates made, saved the church from destruction. Huge funds have been invested in the restoration of the historical monument over the past hundred years. According to experts, the building can successfully survive until 2092 after the work is carried out. But the movement of groundwater can still significantly accelerate its destruction. … Read further 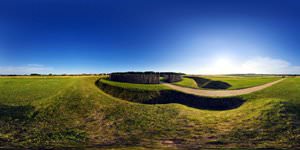 Distance from Erfurt center - 63.8 km.
These have led the scientists to the idea that the old astronomical observatory could be located on the site of the Goseck circular excavation site. Perhaps such formations helped people to form the exact moon calendar several thousand years ago. If the assumptions of the scholars are confirmed, the Goseck circular excavation facility will be the oldest existing solar observatory on Earth. According to the approximate estimates, the observatory was erected about 4900 years bc. … Read further

Tips for the cities around Erfurt

Thuringia
3. The public transport system of Thuringia is well-developed; you can comfortably travel throughout the region by electric trains and buses. It’s worth noting that the railroad runs through an incredibly beautiful area, so the usual trip by train can turn into a fascinating excursion. 4. Those who are going to call other cities and countries are strongly recommended to ... Open »
Leipzig
3. Most stores and malls open at 9:00 am and serve visitors to 6:00-7:00 pm. Saturday is a half-day, and Sunday is a day off. 4. The word ‘ab’ can be seen on many price tags in shops and at markets. This means that price shown is minimal for this good, but after you have chosen a particular thing, it can become much higher. In this case, it’s better to clarify the real ... Open »
Kassel
3. Don’t forget that it is prohibited to throw litter on the streets or in public areas. It is a mistake to think that a small piece of paper or a cigarette stub will be left unnoticed. Even if a policeman doesn’t notice this, there can always be a pedantic passerby who will notify the authorities about the breach. This situation is likely to result in a fine that can be ... Open »
Magdeburg
3. Most local people have a rather good command of English language but give preference to native language in communication. Before visiting Magdeburg one should better learn some phrases in German. It will help not only connect with local folks but will turn to a perfect way of respect of national heritage. 4. Banks offer a more profitable way of currency exchange than ... Open »
Wurzburg
3. Motorists should remember that there is a strict system of traffic rules in the city. Any violation is due to heavy fines. Pedestrians should also watch the traffic closely and cross the streets in specially designated places only. 4. The best way to see all sights of the city is to make a walk in the city on foot. All important sights of Wurzburg can be conveniently ... Open »
Karlovy Vary
3. Travellers, who decide to rent a car, will need to present a driving license of the international standard and a copy of the identity document. Prepare that you will be asked to pay a deposit for the time of car rent. The amount of the deposit depends on the brand of a car. 4. The best way to travel in the historic part of the city is by foot. This way it will be easier ... Open »

Travelling to Erfurt - advices and tips. What should be provisioned in advance, the rules you might want to follow, and the things you better avoid doing in Erfurt. We help you to make your trip smooth and easy, with no unexpected surprises.