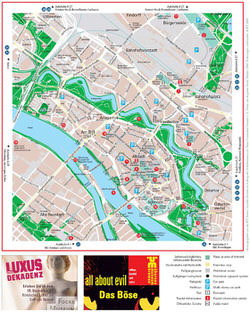 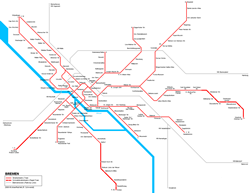 Interactive maps of hiking and biking routes around Bremen

1. You can zoom in/out using your mouse wheel, as well as move the map of Bremen with your mouse.
2. This interactive map presents two modes: 'Biking Routes' and 'Hiking Routes'. Use the '+' button on the map to switch between them.

This Bremen map has two modes: 'Railway Network' and 'Landscape & Rural Map'. Use the '+' button on the map to navigate.

Our guide to Bremen

Hotels with history of Bremen

Comfortable Hotel Wolters is located not far from the center of Bremen, and its splendid design is a great reminder of traditions of the past. A team of designers used massive wooden furniture, colorful carpets with interesting patterns, large paintings and exclusive lace draping to create a special atmosphere of elegance and sophistication. The most interesting rooms of this historic hotel are located on the top … Open

2. On Sundays the square in front of Church of Our Lady becomes the venue for free concerts of Bremen Musicians. 3. Fans of gastronomic tourism should not forget to visit Ratskeller restaurant, which is located in the building of City Hall. Here you can try all best national dishes at very reasonable prices. 4. The majority of banks and government agencies work from early morning until … Open

In Bremen, the entertainment does not end up with festivals and various celebrations. In order to warm up and burn some calories after consumed beer and tongue breakers, we have highlighted for you some exciting and active pastimes. In the „Unterwegs – DAV Climbing Gym Bremen“ - a sports centre, where you can try your best to climb the height of fourteen meters. It is located near Bremen University and operates … Open

Weekend in Bremen in original style

Bottcherstra&szlige remains one of the most famous and popular tourist streets in Bremen. During a walk there, you will see many interesting sights and architecture landmarks. Building 4, which is also known as The house with the ringing of bells or the Glockenspiel House, is the most mysterious house on the street. Many consider these miniature bells to be a mere decoration of the façade, but in true the 30 bells … Open

Festivals and events in Bremen

The city of Bremen is one of the most beautiful places in Germany. Bremen is the free Hanseatic city, which is globally known due to Grimm brothers and their famous fairy tale "The Bremen Town Musicians". For a good reason, Bremen is related to music, dances and nice entertainment events. If you are planning to come here - do your best not to miss such an opportunity and go rogue with local people on one of the … Open

Rather small, but very comfortable and charming Landhaus Höpkens Ruh is located in a green zone close to Miles Park. Its guestrooms are mostly made in classic style, but each one has its unique look. Romantic antique furniture only adds to the overall atmosphere of the hotel. To the service of guests, the hotel offers a golf course and tennis court, while fans of walking will enjoy a shadowy garden. The … Open