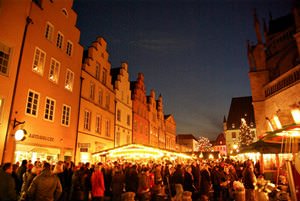 Osnabruck has many interesting historical symbols, as well as numerous museums and cultural centers. Connoisseurs of fine art will have a chance to visit the Haus-Museum Felix Nussbaum dedicated to the life and work of the famous artist Felix Nussbaum. A few years ago, an old house in which the artist lived in the first half of the 20th century was renovated and is now an outstanding architectural monument itself. The museum has collected about 200 works by the artist, as well as lots of interesting exhibits, one way or another related to his biography. The museum is striking not only with its original architecture but also with an unusual internal layout. It has a temporary exhibition hall and a small souvenir shop.
Advices to travellers: what you should know while being in Osnabruck
1. The nearest international airport to the city is 35 km away from the city. Many tourists prefer traveling to Osnabruck by train through Berlin, Bremen or Hamburg. The city is also …

Open
In the city's main square, you can see the old Town Hall building. It is famous for the fact that the Peace of Westphalia Treaty was signed here in 1648. This became one of the key events in the history of the region. Locals do not forget about this significant document: at the entrance to the Town Hall, one can see portraits of military and political figures who participated in the signing of the agreement.
Near the historic Town Hall is one of the city's most beautiful churches - Kirche Der Jungfrau Maria. It was founded more than 200 years ago but completely burned down during the Second World War. Thanks to the drawings preserved in the city archive, it was possible to restore the church to its original condition. The best experts were involved in its construction. Now it looks exactly the same as 200 years ago. One of the main features of the church is its stunning pediments. Copyright www.orangesmile.com
Shopping in Osnabruck - main shopping streets, outlets and boutiques
Osnabruck is ready to offer plenty of stores attractive with their prices and product range. Those who prefer sophisticated, expensive goods will be interested in visiting Markthalle …

Open
An interesting historical landmark is the old Bucksturm Watchtower. It was erected in the 13th century and was originally used to protect the city, and later was converted into a prison. During the witch-hunt years, prisoners suspected of witchcraft were kept in this tower. Currently, the old tower houses a small themed museum dedicated to this historical period. 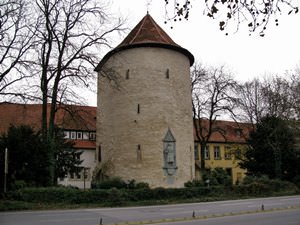 Everyone should totally take a tour of the ancient Schloss Osnabrück. It dates back to the second half of the 17th century and is a striking Baroque architectural monument. This splendid castle was built as a residence for Prince Ernest Augustus and currently stands on the border between Osnabruck's old and new town. The castle was also badly damaged during the war years. It was possible to completely restore it only by the 70s of the last century. Presently, the historic building is occupied by the teacher's college. During the reconstruction period, a new beautiful garden was formed around the castle. It became one of the favorite places to walk with locals and tourists alike. You can see many symbolic sculptures and memorials in the garden.
Guide to Osnabruck sightseeing - things to see and to visit
The city is rich in traditions and places of interest. Travelers will not get bored in Osnabruck, because they will find surprises and numerous amusing entertainments right at every step. …

Open
The Museum of Industrial Culture can be found in the beautiful Renaissance-style historic building. The latter was built in 1871 directly above the coal mine. Today, a must-have part of the museum tour is descending to the bottom of the mine. A glass elevator takes visitors down to a depth of 24 meters. They can see with their own eyes the conditions in which coal was mined many years ago. The 300-meter-long adit presents a very interesting collection of industrial exhibits. Machines and various working tools that were once used by miners were preserved down here. The museum building keeps a collection of old photographs, as well as themed exhibitions dedicated to the most famous industrialists of the region. 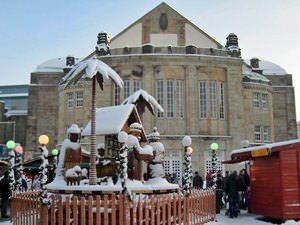 One of the city's oldest surviving buildings is St. Peter's Cathedral dating back to the 12th century. The very first church was erected on this site in the 8th century but was completely destroyed during the war with Normandy. The cathedral has been rebuilt and reconstructed throughout hundreds of years, so elements of various architectural styles are currently combined in its external appearance. Since citizens used the old building as a bomb shelter during the Second World War, the cathedral was partially destroyed at that time. It was possible to fully restore it by 2003. An ancient organ was also restored at the final stage of reconstruction works.
Family holidays with kids in Osnabruck. How to entertain your child, things to show to children.
A family vacation in Osnabruck will delight every member of the family, as the city has entertainment for every taste. This German city is rich in attractions (Osnabruck Castle, St. Peter's …

Open
A regular walk along Osnabrück streets can turn into a fascinating tour. The city has preserved many old half-timbered buildings, which can now be found on all historical streets. Most of the architectural monuments are concentrated on Böttcherstraße. A spectacular historic building currently houses Romantik Hotel Walhalla.

In the section below, you can get one of our excursion, activities or city discovery tours over Osnabruck and surroundings. Our website offers 10-30% lower ticket prices, when compared to the offline purchase on the spot.

City tours, excursions and tickets in Osnabruck and surroundings

This guide to cultural sights Osnabruck is protected by the copyright law. You can re-publish this content with mandatory attribution: direct and active hyperlink to www.orangesmile.com.
Osnabruck - guide chapters 1 2 3 4 5 6 7 8
Reference information
Map of all art museums

Art galleries in Osnabruck and around
♥   Art museum 'Felix Nussbaum Haus' Osnabrück, 1.2 km from the center. On the map

Cathedrals and basilicas near Osnabruck
♥   Basilika St. Ida, Lippetal-Herzfeld, 67.4 km from the center. On the map

Photogallery of cultural heritage of Osnabruck

Excursions over cultural sights of neighbours of Osnabruck

Bielefeld
The city is rich in various attractive architectural and historical landmarks. Sparrenburg Castle is considered the oldest building in Bielefeld. The building of the castle started in 1240 and lasted nearly 10 years. The magnificent castle is built on one of the highest hills in the region. For many years, Sparrenburg was the major protective facility of the city, so it had to ... Open »
Munster
One of the main landmarks of Muenster is the City Museum (or Stadtmuseum) which exposition is devoted to the most significant events of the city history. The age of some showpieces exceeds thousand years. One of the museum halls is totally dedicated to the World War II. The museum frequently holds engaging cultural events, exhibitions and seminars. Among architectural ... Open »
Lemgo
The main treasure of Lemgo is its unique historic buildings. Many of them were badly damaged during the Second World War, but in the postwar years, most of the urban architecture was restored. Hexenbürgermeisterhaus dating back to 1571 is considered to be the most spectacular architectural monument. Its Renaissance-style facade decorated with elaborate wood carvings and ... Open »
Gronau
Gronau is a quiet and peaceful town whose most remarkable attractions include beautiful parks designed for gaining peace of mind and aesthetic pleasure. They are all mainly concentrated in the vicinity of the city, while the city itself is rather suitable for a quiet and measured life. On the outskirts, you will find Bentheim Castle. The castle is notable for being perfectly ... Open »
Dortmund
Without a doubt, Dellwig House is one of the most interesting architectural sights of Dortmund. This beautiful castle on water was built in the beginning of the 13th century. At that time it belonged to a noble family. During its centuries old history the castle has been repeatedly destroyed and rebuilt, so now the facade of the building is an interesting mix of different ... Open »
Oldenburg
In Oldenburg, you can arrange a very interesting sightseeing program. One of the city's main historical symbols is Schloss Oldenburg (Oldenburg palace). It was built in the first half of the 17th century as a vivid example of the German Renaissance. For many years, this palace has been the official residence of city rulers. The three-story palace is distinguished by ... Open »

Culture guide to Osnabruck. Which fascinating sights to visit once you are in Osnabruck: temples, churches, museums, theaters and castles. Recommendations (with addresses, phone numbers and links) on the places 'must visit' in Osnabruck. Plan your own city excursion by using this page info!