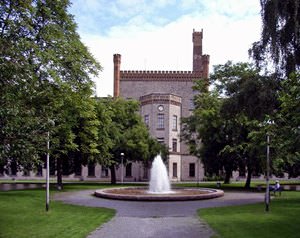 The city is rich in various attractive architectural and historical landmarks. Sparrenburg Castle is considered the oldest building in Bielefeld. The building of the castle started in 1240 and lasted nearly 10 years. The magnificent castle is built on one of the highest hills in the region. For many years, Sparrenburg was the major protective facility of the city, so it had to endure many sieges. The fortress has a large system of underground passages – tourists will surely see them during an excursion in the castle. Several years ago, Sparrenburg was completely restored and so several nice observation decks appeared near it. Tourists, who only start exploring the city, are recommended to start exactly from this landmark.
Cuisine of Bielefeld for gourmet with top restaurants and cafe
Fans of gastronomic tourism will be amazed by the variety of Bielefeld restaurants – there are dining venues of different cuisines of the world in the city. To the opinion of numerous …

Open
Neustädter Marienkirche is a no less important architectural landmark of the region. Constructed at the beginning of the 15th century, the church is, indeed, a fabulous example of gothic architecture. There are several memorial sarcophagi in the church. Several noble residents of the city who lived in the 15th – 17th centuries are buried there. The beautiful church exhibits precious religious artifacts, such as old icons and crucifixions that have been at Neustädter Marienkirche since its opening.
Alter Markt is one more interesting landmark that definitely deserves a visit. There is a beautiful fountain on this square, Merkurbrunnen. Walk in this area to see several beautiful old mansions and the famous Crüwell-Haus. The Theater am Alten Markt located nearby is also a prominent landmark of Bielefeld. The gorgeous theater is open in the building of an old city hall. Copyright www.orangesmile.com
Authentic traditions, festivals and lifestyle of Bielefeld inhabitants
The ancient city of Bielefeld was founded at the beginning of the 13th century, so there’s no wonder why it has a range of interesting peculiarities. For example, many current names of …

Open
Numerous museums of Bielefeld never cease to attract new visitors. Without a doubt, Bauernhausmuseum is the most famous museum in the city. Open in 1917, this is a large open-air museum, the exhibition of which includes many models of old weaving machines and other handicrafts. There is also an old windmill in the territory of the museum, and even an old bakery that dates back to the 18th century. The next museum worth the attention of tourists, Naturkundemuseum, is open in a magnificent 17th-century estate. This museum exhibits a rich collection of minerals and often hosts interesting exhibitions, presentations, and educational lectures. In total, there are 13 museums in Bielefeld, and each of them exhibits a unique collection of artifacts. 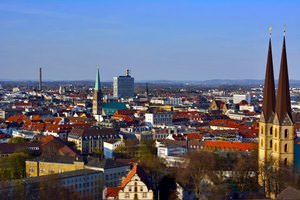 The Ravensberg Spinning Mill is always present in the list of the most famous landmarks of the city. Constructed between 1855 and 1857, this fabulous mill is tightly connected to the history of the region. With its 20,000 whirling spindles, the mill was one of the biggest flax spinning mills in whole Europe in the 19th and at the beginning of the 20th centuries. Nowadays, the mill doesn’t work and has become a popular tourist spot. The territory near Ravensberg was transformed into a park. There are also a cinema, two museums, a restaurant, and even an education center nearby.
Your active city break in Bielefeld. Attractions, recreation and entertainment - best places to spend your day and night here
In Bielefeld and its suburbs, travelers will find many interesting natural landmarks that are definitely worth visiting. Travelers with children will enjoy an excursion to the city’s …

Open
Residents of Bielefeld do not forget about their past and one more proof of that is located in the park next to the Nicolai Church. It is the statue of Linen Weaver. The bronze figure of an old man was created in 1909 by Hans Perathoner. This way locals wanted to underline the importance of linen manufacturing in the history of the city. The statue was made after the real person - Heinrich Heienbrok from Jöllenbeck who was indeed a linen weaver. The sculptor depicted him with his tool bag, pipe, and gnarled stick. Perhaps, the statue is the second most famous landmark of Bielefeld after Sparrenburg Castle. Fans of historical landmarks will also find it interesting to attend the St.Jodokus Church. Initially, the building was a Franciscan monastery, but it was transformed into a church in 1511. Inside the church, visitors will see several precious artifacts, such as the Black Madonna that dates back to the 13th century, old icons, and the 15th-century wooden sculpture of St. Jodokus. 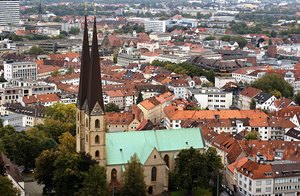 Kunsthalle stores a lot of interesting paintings that will appeal to connoisseurs of art. The main focus of this museum is on contemporary art. It often hosts temporary exhibitions. One place worth visiting is Lenkwerk, where you can look at the exquisite retro cars. Bielefeld is famous for the “Oetker brand”, and it is not surprising that there is a museum dedicated to this brand located on its territory. We are talking about Dr. Oetker Welt, as the museum is called. Besides the fact that you can learn a lot of interesting information about the production of sweets here, you also get to taste them. It is also worth mentioning that the city is known for its developed light industry, and as a result there is the Museum Wäeschefabrik on its territory.
Advices to travellers: what you should know while being in Bielefeld
1. The city has a well-developed public transport system. In order to make a bus ride, tourists need to purchase a ticket. Tickets can be valid for several hours, one day, a week, or a month …

Open
Park Ravensberg is famous for its beautiful fountain that is located in the center, as well as the spinning mill of Ravensberger Spinnerei (one of the best monuments of the industrial era of Bielefeld), which is located on its territory. You can find here too the Historisches Museum Bielefeld, from where you cannot get away quite quickly – the museum is full of interesting exhibits telling the history of the city, and paying special attention to the industrial side, because the first thing that usually comes to mind at the mention of the city is “industry”. 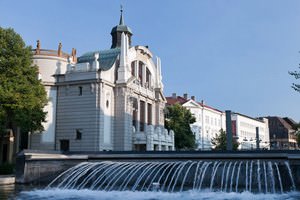 The city’s highest point is Fernmeldeturm Hünenburg. Needless to say, it is precisely from here that unbelievably beautiful views of the city open up? A city entwined with greenery, beautiful roofs, and a turquoise sky – all this is before the eye of the beholder. Around you can find a few cozy cafes, where you can spend a very nice time. In addition, the area around the tower is ideal for walking. Rathaus is one building that deserves close attention. The structure is very beautiful, that you will definitely wish to work in such an institution. You will involuntarily feel envious of the German officials who were fortunate enough to work here.
Extraordinary weekend in Bielefeld - unusual places, services and attractions for travel gourmet
…

Open
A few words should be said about Botanischer Garten, another great place for a walk. In addition to “native” plants, you will see here exotic varieties of trees and plants. The “pearl” of the garden is Sakura; many people come here just to look at this tree. Also noteworthy is the Rudolf-Oekter-Halle building, which is interesting from an architectural point of view. In addition, interesting concerts are held here, all you need do is to follow the announcement of upcoming events.

In the section below, you can get one of our excursion, activities or city discovery tours over Bielefeld and surroundings. Our website offers 10-30% lower ticket prices, when compared to the offline purchase on the spot.

This guide to cultural sights Bielefeld is protected by the copyright law. You can re-publish this content with mandatory attribution: direct and active hyperlink to www.orangesmile.com.
Bielefeld - guide chapters 1 2 3 4 5 6 7 8 9 10 11
Reference information
Map of all art museums

Art galleries in Bielefeld and around
♥   Art museum 'Kunsthalle Bielefeld' Bielefeld, 0.5 km from the center. On the map

Cathedrals and basilicas near Bielefeld
♥   Basilika St. Ida, Lippetal-Herzfeld, 47.8 km from the center. On the map

♥   Basilika Mariä Heimsuchung, Werl, 67 km from the center. On the map 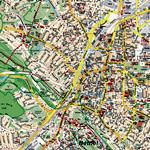 Photogallery of cultural heritage of Bielefeld

Excursions over cultural sights of neighbours of Bielefeld

Lemgo
The town has many interesting museums and art galleries. Art connoisseurs would be especially interested in visiting the Museum Junkerhaus dedicated to the fine art of the late 19th century. In addition to artistic canvases, works of local artisans were also actively used for the museum's decoration. Most of the paintings presented here are framed in incredibly beautiful ... Open »
Osnabruck
Near the historic Town Hall is one of the city's most beautiful churches - Kirche Der Jungfrau Maria. It was founded more than 200 years ago but completely burned down during the Second World War. Thanks to the drawings preserved in the city archive, it was possible to restore the church to its original condition. The best experts were involved in its construction. Now it ... Open »
Munster
The exposition of the museum includes about eight hundreds of artworks of the renowned painter and artist. Among the shopieces one will find as completed artworks, so sketches and rough creations. A significant excursion object is the Muhlenhof open air museum depicting the atmosphere and environment of a typical village of the early medieval period. The museum visitors may ... Open »
Hannover
Market Church (Marktkirche) is one more interesting sight of the city. You will hear a lot of interesting stories and legends connected with it. The original project of the church was so large and expensive that the construction of the church was frozen several times - the city’s treasury simply ran out of money. According to a legend, the walls of the church became the ... Open »
Winterberg
In the city, there are interesting cultural centers. Westdeutsches Wintersportmuseum, the West German Winter Sports Museum, deserves a priority guests’ attention. The first winter sports fans started to visit the city more than a hundred years ago. In that period, the infrastructure of the region was improved and was close to the perfect one. This interesting museum tells ... Open »
Dortmund
Dortmund is home to a huge variety of museums. Museum of art and culture has always remained one of the most beloved places for tourists from all over the world. The location of the museum is also very interesting - a beautiful building of the early 20th century. The halls of the museum feature a rich collection of ancient sculptures, paintings, antique furniture and crafts. ... Open »

Culture guide to Bielefeld. Which fascinating sights to visit once you are in Bielefeld: temples, churches, museums, theaters and castles. Recommendations (with addresses, phone numbers and links) on the places 'must visit' in Bielefeld. Plan your own city excursion by using this page info!