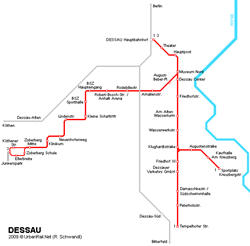 Interactive maps of hiking and biking routes around Dessau

1. You can zoom in/out using your mouse wheel, as well as move the map of Dessau with your mouse.
2. This interactive map presents two modes: 'Biking Routes' and 'Hiking Routes'. Use the '+' button on the map to switch between them.

This Dessau map has two modes: 'Railway Network' and 'Landscape & Rural Map'. Use the '+' button on the map to navigate.

Our guide to Dessau

Those who want to have a good time at night will find a lot of places for that. Thus, Beatclub Dessau welcomes lovers of dancing to energetic beats, beer lovers gather in Hexe's Tropica, and Zur Försterklause is a pub for those who prefer a calm, cozy atmosphere. You can also visit Stars Diner Chaplin's where every evening promises to be fun. König Lounge 63 Shisha-Bar can be ideal for those preferring great … Open

Festivals and events in Dessau

Another interesting festival takes place in the middle of July in the city of Grefenhainhen located near Dessau. The festival's name is Melt and it is dedicated to electronic music and indie rock, although you can also hear some related genres here. This is one of the region's biggest events, which many music fans strive to visit. The event is held next to Iron Drift King racing track. Another interesting festival … Open

The Days Inn Dessau, located in the territory of the park complex Dessau-Wörlitz, will not disappoint lovers of a comfortable hotel. Guests can choose from more than a hundred rooms, among which there are very elegant double rooms, decorated in cream colors. Each of these rooms has a full-height panoramic window, with a beautiful view of the park. Among the additional services that she offers, it is worth noting … Open

The Hotel-Villa, Die Fürstenhäuschen am Luisium can surprise you with only its appearance; it is a building of regular rectangular shape, whose facade imitates wooden finish and is painted in bright red. This villa is designed to accommodate four guests at a time. Its atmosphere will appeal to those who like a vacation in a rustic style. Elegant light wood furniture, beautiful fabrics with patterns, and an … Open

Vacationers with children will be interested to visit the Museum of Natural History. It contains a rich collection of exhibits dedicated to local flora and fauna. The museum also contains a very interesting collection of archaeological finds. Fans of walks in historical places will be interested to visit the palace and park complex of Mosigkau. It was built in the middle of the 18th century and is a striking … Open

Traditions and mentality of Dessau

Heavy metal is also widely loved in Kurt Weill's hometown, which is confirmed by the Metalfest held at the end of May and attended by around 27,000 people every year. Among its headliners are the most famous and popular bands playing in the genres of thrash, heavy, power, Viking metal. This is one of the major events of this kind not only in the region, but also in the whole of Germany, and for metalheads, this … Open