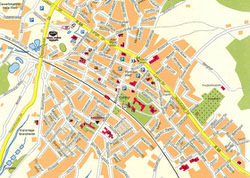 1. You can zoom in/out using your mouse wheel, as well as move the map of Halle an der Saale with your mouse.
2. This interactive map presents two modes: 'Biking Routes' and 'Hiking Routes'. Use the '+' button on the map to switch between them.


Railway and landscape maps of Halle an der Saale area

This Halle an der Saale map has two modes: 'Railway Network' and 'Landscape & Rural Map'. Use the '+' button on the map to navigate.

Our guide to Halle an der Saale

Moviegoers are advised to go to the following cinemas: CinemaxX Halle, Light Cinemas Halle, Puschkino, The Luchs Kino Halle, and Thelight Cinema Hall. If there is a desire to watch some theatrical performances or opera, Handel's hometown has something to offer - Neues Theater, Oper Halle, and Konzerthalle Ulrichskirche. All you need to do is check the repertoire. Those who prefer watching sports competitions will … Open

Traditions and mentality of Halle an der Saale

Since Halle is Georg Handel's hometown, it is not surprising that Handel Festival in honor of the famous native is held here. Its locations are many institutions throughout the city (theaters, opera houses, concert halls). You can listen to classical works of talented composers, not only Handel. Nevertheless, the major focus is on the work of the great composer who was lucky enough to be born in such a wonderful … Open