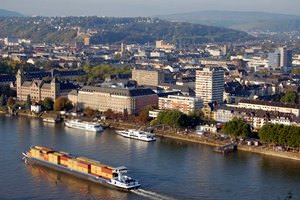 Koblenz is a beautiful city with a rich history; there was a settlement of the Order of the Crusaders in its territory in the Middle Ages. Old buildings and monuments, each of which has its own unique history, remind visitors of the city about important events. To start exploring the city's attractions travelers are advised to walk around the downtown, where there are a huge number of ancient streets. At every turn you can see beautiful miniature houses built in 18th-19th centuries, picturesque squares and winding alleys.
Advices to travellers: what you should know while being in Koblenz
1. Tourists are advised to go shopping only with national currency, the other won’t be accepted in shops and markets or would be changed at a very disadvantageous exchange rate. In the …

Open
A number of important religious sites are also located in the center of Koblenz. It is recommended to include a visit to St. Florin, St. Castor and St. Mary cathedrals to your excursion. All of them were founded in the 11th-12th centuries and are constructed in the Romanesque style. These majestic monuments have survived to our times almost undamaged. Churches boast not only with an impressive appearance, but also with a beautiful interior design. Within their walls many important religious artifacts are kept.
An interesting attraction is the so-called ‘German Corner’ (Deutsches Eck), which is the confluence of two rivers - the Rhine and the Moselle. In 1953, it hosted the opening of the monument to William I, a grand statue that was a symbol of the unity of German people. Picturesque landscape always attracts a lot of travelers, they come to admire the beautiful scenery and capture themselves against the beautiful monument. Copyright www.orangesmile.com
Extraordinary weekend in Koblenz - unusual places, services and attractions for travel gourmet
…

Open
There are also world-class attractions in Koblenz. For example, the Ehrenbreitstein castle that is one of the largest defensive structures in Europe. This majestic building is located on a high hill; over the years of existence it has completely changed its appearance. At present, a great fortress is home to several state agencies; some halls of the fortress are allocated to the exhibition of the historical museum. As for the cultural institutions of Koblenz, then the Middle Rhine Museum, which holds a large collection of old paintings, should be mentioned. Ludwig Museum presents to visitors the collection of contemporary art, and the Rhine Museum introduces to visitors the history of navigation. 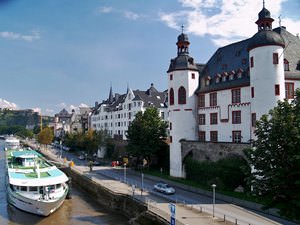 Of great interest to travelers is DB Museum Koblenz, thanks to which they can see the evolution of German trains. It is a great place for those arriving with children because here it is allowed to climb on steam locomotives and ride real trains (of course, with a driver). The museum with the interesting name Romanticum demonstrates everything that can be associated with the region: history, art, culture, architecture, archeology, legends and myths. This cultural institution is a must-have for those wishing to learn as much useful information as possible about the region where the journey takes place.
Guide to Koblenz sightseeing - things to see and to visit
The city is founded at the point of merging Rhine and Mosel Rivers. Once Koblenz has been used as a protective facility by a famous commander Germanicus; later the Romans built there …

Open
Tours in the nearby Deinhard Kellermuseum would probably be appreciated by those interested in how wine is made in Germany and, of course, in tasting the final product. It is worth noting that the museum is equally interesting from an architectural point of view, immediately catching the eye with a beautiful exterior. At the exit, one can find a store with an excellent selection of wines. A couple of bottles can be bought as a gift to relatives and friends. Another interesting museum is the Rheinisches Fastnachtsmuseum, among the exhibits of which are traditional costumes worn at the main Koblenz festival (of course, this is about Fastnacht, or simply Karneval). Some of the costumes have historical value since they were sewn several centuries ago. 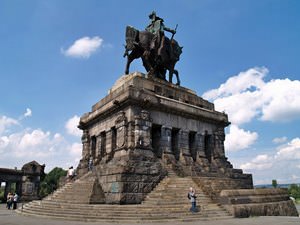 A lovely place for a promenade is Festungspark. On the way, you can enjoy the wonderful atmosphere, fresh sea air, excellent panoramic views. Tourists who wish to watch an exciting theatrical performance and thus satisfy spiritual needs are recommended to visit the Theater Koblenz. Its building was constructed in 1787 by the architect Peter Joseph Krahe. The first work, which marked the opening of the theater, was Mozart's opera Singspiel “The Abduction from the Seraglio”. During subsequent wars, the building was not affected much by raids and bombardments. It must be said that Koblenz has a lot of interesting sculptures - virtually at every step one can see something beautiful. The main thing is not to miss all this beauty so be sure to keep your eyes open (or “die Augen offen haben”, as locals would say).
Family holidays with kids in Koblenz. How to entertain your child, things to show to children.
The German city of Koblenz can be a great vacation spot. And if you aren't sure whether to take children with you, whether they will like it here, the answer is obvious: come together as a …

Open
Kurfurstliches Schloss is interesting from both a historical and an architectural perspective. Once it was the residence of the last Archbishop-Elector of Trier, Clemens of Saxony. The building designed in the style of early classicism dates back to the late 18th century. One should not ignore the historical ensemble called Vier Türme. It consists of four buildings with artistic towers facing the square with corners, thus forming a small alley. Each detail of the composition is interesting, many tourists admire its bas-reliefs and carved elements for hours. Also, you should not pass by Rathaus - however, this applies to any German city, since local residents know how to choose very impressive town hall buildings. And this building is no exception. 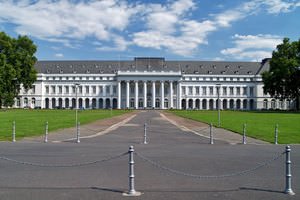 Alte Burg is another remarkable attraction in Koblenz. Thanks to the acquaintance with this castle, tourists will know the history of the city better and get true aesthetic pleasure. The Old Castle (literally in English) was built on the ruins of the once-existing Roman tower. It happened in 1307 by order of the Archbishop of Trier, after quite a long resistance on the part of Koblenz. At various times, the building served different purposes: after losing its defensive function, factories were based here, and then it served the city. After the reconstruction carried out after the Second World War, the castle became a city library, and since 1980 it has housed the city archives.
Cuisine of Koblenz for gourmet with top restaurants and cafe
In addition to numerous restaurants serving German cuisine, Koblenz offers its guests a variety of interesting gastronomic restaurants. Any gourmet can choose a suitable place to stay there. …

Open
We cannot fail to mention the Preußisches Regierungsgebäude, which is famous for its rich history, also attracting attention with its magnificent architecture: a rich facade with copper sculptures, the majestic scale of the building, a beautiful clock tower - all this makes a vivid impression. As for its history, it is worth noting that the building was built in 1905 after the old Prussian government residence burned down on this site. Its Neo-Romanian style was chosen by the architect Paul Kieschke. The building was not damaged during the Second World War, and today the city’s Higher Regional Court is based here.

In the section below, you can get one of our excursion, activities or city discovery tours over Koblenz and surroundings. Our website offers 10-30% lower ticket prices, when compared to the offline purchase on the spot.

This guide to cultural sights Koblenz is protected by the copyright law. You can re-publish this content with mandatory attribution: direct and active hyperlink to www.orangesmile.com.
Koblenz - guide chapters 1 2 3 4 5 6 7 8
Reference information
Map of all palaces

Public palaces near Koblenz
♥   Palace 'Electoral Palace' Bonn, 54.7 km from the center. On the map

Cathedrals and basilicas near Koblenz
♥   Dom Ss. Georg und Nikolaus, Limburg an der Lahn, 33.5 km from the center. On the map

♥   Basilika Sankt Martin, Bingen am Rhein, 48 km from the center. On the map

Photogallery of cultural heritage of Koblenz

Excursions over cultural sights of neighbours of Koblenz

Bonn
The University of Bonn is a well-known object of excursions, which is popular far beyond the borders of the country. Among the students of this university were such famous people as Karl Marx, August Wilhelm von Schlegel, Heinrich Hertz, and several Nobel Prize laureates, who have spread the fame of the ancient university around the world. The opening of the educational ... Open »
Wiesbaden
A beautiful Russian church, which is located on Mount Neroberg, is considered the main symbol of the city. The church was built in a unique Russian-Byzantine style and is a replica of Christ the Savior Cathedral located in Moscow. It was built at the initiative of the Russian aristocracy, who enjoyed having their vacations in Wiesbaden in the beginning of the 19th century. ... Open »
Mainz
The same attractive spot for tourists is the Christ Church or Christuskirche. The building gets its most impressive look in the warm season of the year as the church neighbors a scale park with plenty of fragrant flower beds and fountains. This is a perfect place for fans of hiking. The major part of the medieval buildings was destroyed during the World War II. However the ... Open »
Gummersbach
Burgruine Eibach is a must-have for all history buffs. The ruins create a fantastic atmosphere of the touch of antiquity. The castle built in the middle of the 14th century was the family castle of the knightly von Neuhoff family, after that - the Seraing family. The castle burned down in 1782, leaving only a round tower in the south-east. Its restoration was carried out at ... Open »
Cologne
You will find many priceless historical and architectural monuments in Cologne. Every tourist should not forget to visit them. We encourage you to pay your attention on the ensemble of 12 Romanesque churches – the majority of religious monuments of the city were built yet in the Middle Ages. Cathedral of St. George is the most beautiful building made in the Romanesque style. ... Open »
Frankfurt am Main
It is worth to visit local museums and galleries in Frankfurt. In a beautiful 19th-century building there is the Municipal Museum of Sculpture (Liebieghaus); exhibits represented in its walls are very diverse. One of the most interesting places in the city is the Museum für Angewandte Kunst with a collection of over 30,000 unique items. The museum introduces the culture of ... Open »

Culture guide to Koblenz. Which fascinating sights to visit once you are in Koblenz: temples, churches, museums, theaters and castles. Recommendations (with addresses, phone numbers and links) on the places 'must visit' in Koblenz. Plan your own city excursion by using this page info!