Detailed hi-res maps of Baden-Baden for download or print 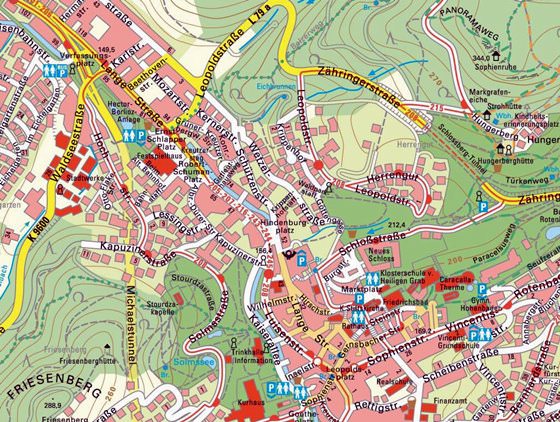 Search for services, infrastructure and sights on map of Baden-Baden

Our guide chapters over Baden-Baden

Baden-Baden is, without a doubt, a great resort for family rest. The territory of the city is the location of various playgrounds, clubs and amusement parks. Those tourists, who come here with children, are definitely recommended to visit the main library of the city, where interesting lectures and children's holidays take place literally every day. Of course, no little visitor of the library will leave such amazing … Open

Sushi, rolls and other oriental dishes make up the core menu of Sushi Samurai restaurant. Simply no gourmet can resist such a wide selection of delicious dishes. The ground floor of Sushi Samurai is the location of a cozy Japanese restaurant, and the second floor is dedicated to a nice sushi bar, the menu of which is regularly updated and supplemented with new culinary delicacies. Molkenhur restaurant is simply a … Open

Traditions and mentality of Baden-Baden

There are also many interesting stories connected with the name of the city. Until 1931 the city was known as Baden, but due to a frequent confusion the city was given a double name. The reason for this is in the fact that there are also the cities named Baden in the suburban district of Vienna and in Switzerland. These are not all remarkable facts about the famous spa city. Baden-Baden is also known as the first … Open

Baden-Baden is famous for its historic thermal baths, one of the most famous and beautiful baths are considered to be in the "Caracalla". This swimming complex opened relatively recently, in the 80s of the last century, while the very first thermals founded in the era of the Roman Empire. Today, for the visitors of the complex a beautiful swimming pool with an area of about 1000 square meters is available, right … Open

Penthouse Suite Aqua Aurelia offers travelers to spend a few days in a luxurious accommodation place. Its apartments have pleasant design in modern style. There are sliding windows, behind which there is a furnished balcony or a private terrace. The hotel has direct access to Caracalla Therme; an upscale massage parlor has to be mentioned among other amenities. In evening, guests can rest at a cozy restaurant and a … Open

Baden-Baden for children - what to visit

Another fabulously beautiful place is the Lichtentaler Alley. It is pleasant to relax in this park zone at any time of the year. There are many paths for hiking and cycling, benches in the shade of trees, equipped picnic areas, a cozy café, and a river with an elegant pedestrian bridge. Tourists with children are attracted to this well-maintained park by traditional slides chutes and sports complexes, where it … Open