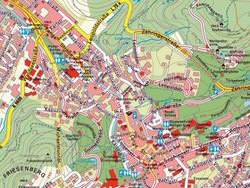 Interactive maps of hiking and biking routes around Baden-Baden

1. You can zoom in/out using your mouse wheel, as well as move the map of Baden-Baden with your mouse.
2. This interactive map presents two modes: 'Biking Routes' and 'Hiking Routes'. Use the '+' button on the map to switch between them.

This Baden-Baden map has two modes: 'Railway Network' and 'Landscape & Rural Map'. Use the '+' button on the map to navigate.

Our guide to Baden-Baden

Hussel store enjoys the deserved popularity among those with a sweet tooth. The store offers dozens of varieties of chocolate and sweets. Its visitors always have an opportunity to order an exclusive desert or purchase fine packages of chocolate for their loved ones. Almost no one visit optical stores during the holidays, however, in Baden-Baden the case is worth an exception. Here runs a wonderful Albert optical … Open