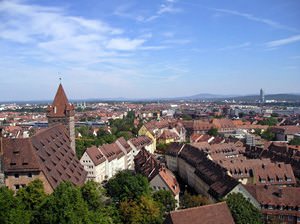 Cultural life in Nuremberg is rich in bright and remarkable holidays and festivals which are fully reflecting traditions and customs of local folks. The Volksfest festival is at best reflects the passion of local people to beer. The festival is held two times per year. Commonly the festival is attended by more than a million of foreign guests. Tasting of popular beer sorts, rich tables with plenty of treats, excellent entertaining program in local pubs and beer restaurants turn the festival into one of the most waited favorite events among local folks.
Advices to travellers: what you should know while being in Nurnberg
1. Tourists visiting the city of Nuremberg for the first time should necessarily visit one of the Nuremberg Info tourist centers. One of them is located not far from the railway station and …

Open
Those tourists wishing to learn folk music traditions of the local people should visit Nuremberg in September as this is exactly the time when the Altstadtfest festival is held. The event features rich entertaining program. Many dance shows and music concerts, street artists’ shows and open air theatrical performances, exhibitions of artworks of amateur artists and sculptors are held within the festival.
The Altstadtfest festival will be of great interest for the youngest visitors too as the festival presents exciting entertaining competitions and shows for kids. Nuremberg will be an interesting destination to visit for music fans as well. The city is an established place for holding of several global music festivals. Annually the city is visited by thousands of rock music fans attracted with the grandest festival Rock im Park. Copyright www.orangesmile.com
Extraordinary weekend in Nurnberg - unusual places, services and attractions for travel gourmet
The romantic city of Nuremberg is often called the country's most "German" city. Its atmosphere and culture are truly unique, and the variety of attractions, among which there are quite … 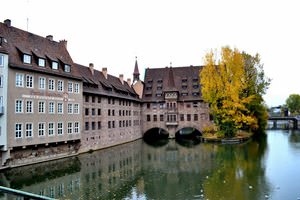 The event features a rather unusual specific character. The festival is devoted to the puppetry which turns it even more attractive for the youngest visitors of the event. Many travelers opt to visit Nuremberg on the Christmas Eve as in December the city changes beyond recognition. The Christkindlesmarkt starts at the beginning of December. The festive market offers plenty of original souvenirs and festive treats. Amazing ethnic holidays and festivals are held in Nuremberg almost every season. Each of the ethnic festivals will be of great interest for tourists as every fest gives them a deeper insight into the local folks’ customs and traditions.
Shopping in Nurnberg - main shopping streets, outlets and boutiques
Nuremberg would be of interest to all fans of shopping, especially to budget tourists. The bulk of the stores and shopping centers presented in the city offer affordable prices. There are …

Open
The Toon Walk is rightly considered Nuremberg's most colorful event. This is a costume parade passing along the island within the city - Insel Schütt. Usually, it is held in early February, but sometimes in early November. People dress up as comic book heroes delighting city guests and locals with their bright costumes. The carnival even got into the Guinness Book of Records a few times: for a record number of hugs per minute (2016) and for the largest number of comic book characters at a parade in Europe (2015). All this testifies to the event's immense popularity. In mid-July, you can also witness wonderful open-air musical performances for every taste. All this is possible thanks to St. Katharina Open Air, a festival taking place at one of the most popular venues in Altstadt - Ruine der Katharinenkirche. 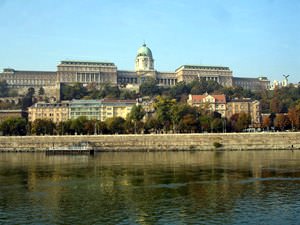 An equally interesting musical event is the Bardentreffen - the largest open-air event in Bavaria, which is annually attended by about two hundred thousand spectators. At the end of the second summer month, you can visit the event and listen to virtually all genres, from jazz to dubstep. Since there are so many festival participants that a single venue cannot fit them all, several ones are prepared for them. Among them are the island of Insel Schütt, Lorenzer Platz, and Trödelmarkt. Among other music festivals, an outstanding one is the Internationale Orgelwoche (ION), which is considered the largest organ music event not only in Germany but throughout Europe. It is held for one week in major churches, starting in early June and ending in early July.
Top touristic routes around Nurnberg: architectural sightseeing and landmarks
Discovering the architecture of Nurnberg from bird's eye view! St. Lorenz, Documentation Center, Central Station, Paulus Buchhandlung, all those monuments are defining the image of Nurnberg …

Open
At the end of July, environment-friendly products are presented at a specially opened market in Hauptmarkt. All this cannot do without other interesting activities such as shows, music concerts, installations. The only condition is that all of them must correspond to the environmental subject. May in Nuremberg marks the "Long Night of Museums", locally known as "Blaue Nacht". This means that all major cultural institutions (theaters, museums, congress centers) are open until early morning, visitors are entertained with theatrical and light performances in the street, as well as music concerts and art exhibitions. Every year, organizers set a certain theme that becomes surprising for all. 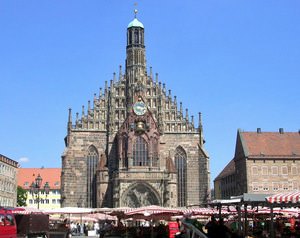 Bavarians are known for their love for beer, and Nuremberg residents are no exception. Therefore, it is not surprising that the city has its beer festival - the Bierfest im Burggraben taking place in mid-June. Usually, the festival lasts about two days to present about a hundred beer varieties from more than forty breweries. The venue is the area near Kaiserburg where, besides a culinary program, a musical one is also prepared for the audience. The same venue hosts the Burggrabenfest delighting visitors in early September. This is a festival of a medieval culture where you can see buhurts, knightly fights, theatrical and acrobatic performances.
Cultural vacation in Nurnberg - fantastic architecture and monuments
Nuremberg Castle, Frankenstadion, Nuremberg State Theatre, as well as many others, they all become the world's cultural heritage objects and remain as iconic monuments for Nurnberg …

Open
Those wishing to enjoy a romantic atmosphere watching movies in the open air will enjoy this opportunity at the Open-Air-Kino beim SommerNachtFilmFestival, which is held throughout the last summer month. The venue is the same Altstadt, as well as city parks. Those who like to buy unique hand-made products will certainly appreciate Trempelmarkt, a flea market that traditionally opens in early May and early September in Trödelmarkt. It is the largest in the country, as evidenced by the number of vendors exceeding four thousand. You can buy everything here - from antiques and interior items to jewelry and toys. Another interesting fair is Consumenta, which opens in late October at various venues in the city and is accompanied by rides and children's activities.

This guide to traditions and festivals in Nurnberg is protected by the copyright law. You can re-publish this content with mandatory attribution: direct and active hyperlink to www.orangesmile.com.
Nurnberg - guide chapters 1 2 3 4 5 6 7 8 9 10 11

Cathedrals and basilicas near Nurnberg
♥   Basilika Hll. Dreifaltigkeit, Gößweinstein, 39.8 km from the center. On the map

♥   Michaelskirche, Bamberg, 51 km from the center. On the map

Colors of Nurnberg in photos

Traditions and festivals in cities around Nurnberg

Bavaria
Cultural traditions of Bavaria are interesting, original and diverse. They represent a wonderful combination of old and modern lifestyle; travelers will feel the unique atmosphere of past centuries in every Bavarian town. Local people treat their traditions and culture with great trepidation, carefully preserving them from the influence of both neighboring countries and ... Open »
Ingolstadt
Citizens of Ingolstadt are very friendly, so tourists shouldn’t hesitate to ask them for help. Local people are proud of the fact that their city was the residence of the Dukes of Bavaria in the past. Of course, they will not forget to tell this fact to tourists. Amazing interlocutors, people with a great sense of humor – these are also typical qualities of local people. ... Open »
Wurzburg
Besides concerts each year the city hosts various festivals dedicated to works of Bach and Mozart. The first Mozart Festival took place in the city in 1921. Since that time it has always taken place in the beautiful residence of Würzburg. Festivals dedicated to works of the great composer are held annually in many European cities, but the holiday in Würzburg has always ... Open »
Augsburg
Augsburg is a city with lots of amazing features, unique national features and its own unforgettable charm. It is often called the "city of canals", many of which were built several centuries ago. The total length of channels is more than 90 kilometers. Another feature of the old part of the city is rich choice of jewelry stores. In the past Augsburg was known as one of the ... Open »
Landshut
Landshut is an incredibly interesting city for exploring the traditions and customs of local people. Here they celebrate some of the most original and beautiful Bavarian holidays. The history of some celebrations has more than one hundred years. The most spectacular historical holiday is the Landshut Wedding, which is usually held in the first half of summer every four years. ... Open »
Dachau
The ability to move towards the goal and never give up is another quality inherent to locals. If they have planned something, only some large-scale objective circumstances can prevent them from achieving the goal. A few words should be said about the local cuisine - like in German cuisine, dishes are known as very hearty. Some must-try dishes include “Bratwurst” (Bavarian ... Open »

Cityguide on traditions, mentality and lifestyle of people in Nurnberg. Learn the best periods to visit Nurnberg to discover its soul - authentic festivals, events and celebrations. We will also reveal the interesting habits, attitude towards the world and to tourists in Nurnberg.