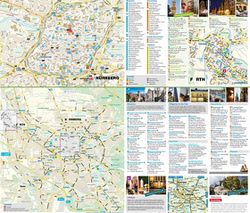 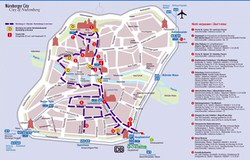 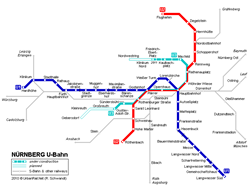 Interactive maps of hiking and biking routes around Nurnberg

1. You can zoom in/out using your mouse wheel, as well as move the map of Nurnberg with your mouse.
2. This interactive map presents two modes: 'Biking Routes' and 'Hiking Routes'. Use the '+' button on the map to switch between them.

This Nurnberg map has two modes: 'Railway Network' and 'Landscape & Rural Map'. Use the '+' button on the map to navigate.

Our guide to Nurnberg

Nuremberg has several beautiful parks where it is always nice to walk. Even those who are not really fond of nature will enjoy themselves here. One of these is the well-kept Burgermeistergarten with its strikingly beautiful green landscapes and fragrant flowers. Take a chance to stroll through Stadtpark, the picturesque views of which are no less amazing. Want to spend time in silence away from the worldly fuss? … Open

Weekend in Nurnberg in original style

Nuremberg's most popular attractions are Albrecht Dürer's House (Albrecht-Durer-Strabe) and a rabbit sculpture located nearby. A huge number of tourists come to see them every day. After admiring the outstanding sights, do not rush to leave the lively tourist area. At the exit from the square, look for a small restaurant that will be easy to distinguish from others by its peculiar interior. The restaurant’s … Open

Festivals and events in Nurnberg

The Toon Walk is rightly considered Nuremberg's most colorful event. This is a costume parade passing along the island within the city - Insel Schütt. Usually, it is held in early February, but sometimes in early November. People dress up as comic book heroes delighting city guests and locals with their bright costumes. The carnival even got into the Guinness Book of Records a few times: for a record number of hugs … Open

8. Public transport cruises the city till late evening, however late in the night one should better use taxi service to get to the desired destination. A taxi should be called by phone or taken from a specialized parking lot. The highest rates are charged by taxi drivers waiting for clients near hotels or restaurants. 7. Tourists who need to call to other countries should better use street call boxes … Open

The best place to choose some souvenirs is the "craft town" of Handwerkerhof. This is a long street with souvenir shops and workshops of various specializations. Here you can buy wonderful handmade tableware and home accessories, toys for children, and even real works of art. This craft town is also notable for the fact that several GREAT jewelry stores are located on its territory. Some of the most original … Open

Nurnberg for children - what to visit

Tucherland is aimed at vacationers with small children. This is a very beautiful entertainment center that is absolutely different from classic ones. Talented designers worked on its decoration, there are many playgrounds, inflatable attractions, trampolines, and swings for kids. You can even find a carousel in the center, and in the warmer months, some of the playgrounds and sports grounds are located outdoors. … Open