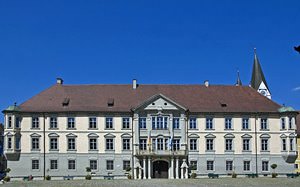 Cultural traditions of Bavaria are interesting, original and diverse. They represent a wonderful combination of old and modern lifestyle; travelers will feel the unique atmosphere of past centuries in every Bavarian town. Local people treat their traditions and culture with great trepidation, carefully preserving them from the influence of both neighboring countries and surrounding towns. All those living outside of Bavaria are called Prussians; this definition can be applied to both inhabitants of distant lands and to citizens of the nearby Cologne and Hamburg.
Advices to travellers: what you should know while being in Bavaria
1. It’s most convenient to travel around Bavaria by train; thrifty travelers are advised to buy Bayern-Ticket at the train station. It operates 24 hours and gives the right to travel …

Open
Indigenous people speak special dialect that won’t be easy to understand even to those who have excellent German. To test your skills you need to go to the marketplace in any Bavarian town and listen to natives talking with each other. Experts point out that even native speakers can’t make out the meaning of their conversation for the first time.
Culinary traditions of indigenous people also deserve special attention. Those who hope to visit local restaurants and taste sausage specialties have to consider several important features. In ordinary domestic restaurants visited by indigenous inhabitants almost all sausages are eaten with fingers without using any additional devices. This behavior mustn’t be treated as a sign of bad manners; locals believe that expensive sausages can go bad if taken with a knife or a fork. Copyright www.orangesmile.com
Guide to Bavaria sightseeing - things to see and to visit
Bavaria has been the popular holiday destination for many years. The beauty of alpine landscapes, unique towns with various attractions, a rich history, infrastructure and hospitality of …

Open
Locals have boundless love to their homeland. They cherish their culture and way of life so much that are reluctant to leave their native Bavaria. It would be hard to find a person who doesn’t think his country to be the best place in the world. 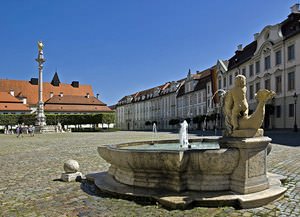 Another striking manifestation of the national culture is the national costume being a special pride of the indigenous population. Due to the huge number of ethnic groups living in the territory of Bavaria, there are several different variations of national costumes. The most recognizable attributes are leather pants or shorts and felt jackets decorated with trusses of chamois hair. Talking about cultural traditions of Bavaria, it’s certainly worth to mention the Beer Festival, as it remains one of the favorite holidays of the indigenous population.

This guide to traditions and festivals in Bavaria is protected by the copyright law. You can re-publish this content with mandatory attribution: direct and active hyperlink to www.orangesmile.com.
Bavaria - guide chapters 1 2 3 4 5 6

City tours, excursions and tickets in Bavaria and surroundings

Cathedrals and basilicas near Bavaria
♥   Stadtpfarr- und ehem. Domkirche St. Peter, Neuburg an der Donau, 23.8 km from the center. On the map

Survived castles around Bavaria
♥   Castle 'Schloss Hexenagger' , 19.9 km from the center. On the map

At the same time, festivities and folk festivals are very popular in Germany. The Germans are quite religious and always celebrate Christian holidays, including Easter, Christmas, and St. Nikolaus day. Christmas is celebrated here on a grand scale. Preparations begin long before its onset. Beer festivals are famous all over the world; the most famous of them is the Munich Oktoberfest. The Germans are very tolerant to foreigners, especially those who come to work in their country. They are also very friendly to tourists. Locals will always appreciate attempts to say hello or ask something in German, taking it as a sign of respect for their language and culture. … Open 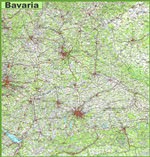 Colors of Bavaria in photos

Traditions and festivals in cities around Bavaria

Ingolstadt
Ingolstadt is a city on the Danube River. It attracts numerous tourists with its special, inimitable charm. Why is this city so special? Many say that Ingolstadt has a unique atmosphere that makes everyone cheerful and optimistic. When staying here, it is easy to understand why local people treat problems with ease and are almost never sad. Traditions and modernity – the city ... Open »
Landshut
It is very difficult to get the opportunity to portray the Polish princess and the Grand Duke. The beginning of the festival is always preceded by a competition in which thousands of applicants for leading roles take part. Ladies grow their hair for several years to become as similar to Jadvyga as possible and do medieval hairstyles. On the festival days, plenty of ... Open »
Dachau
Festivals in Dachau are some of the most significant events in the life of the city gathering many people due to their colorfulness and spectacularity. One of the most visited festivals is the Dachauer Volksfest, which is held in the middle of the last summer month. Here, the youngest visitors will have a unique opportunity to enjoy interesting rides, as well as watch ... Open »
Augsburg
When it comes to the musical life of the city, we must definitely mention the craving of the locals for choral singing. In Augsburg you will find as many as 70 choirs, the performances of which are held at all major events and festivals. Another distinct feature of the city is in high popularity of a puppet theater, the colorful performances of which keep amazing and ... Open »
Munich
Local residents are characterized by careful attention to compliance with all regulations and laws. Respect for law is one of the main national features. Besides this, the residents of Munich are very attracted to new technological developments. They try to get benefits from any new invention; they do not even have time to get used to new household appliances and electronics, ... Open »
Nurnberg
The event features a rather unusual specific character. The festival is devoted to the puppetry which turns it even more attractive for the youngest visitors of the event. Many travelers opt to visit Nuremberg on the Christmas Eve as in December the city changes beyond recognition. The Christkindlesmarkt starts at the beginning of December. The festive market offers plenty of ... Open »

Cityguide on traditions, mentality and lifestyle of people in Bavaria. Learn the best periods to visit Bavaria to discover its soul - authentic festivals, events and celebrations. We will also reveal the interesting habits, attitude towards the world and to tourists in Bavaria.