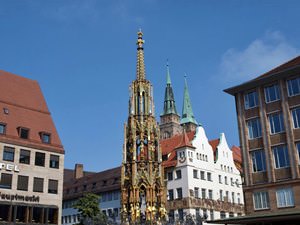 The romantic city of Nuremberg is often called the country's most "German" city. Its atmosphere and culture are truly unique, and the variety of attractions, among which there are quite specific ones, is amazing. Some of them are well known to all tourists, while only few are aware of others. So, probably all experienced tourists heard about the wonderful St. Mary's Church (Frauenkirche). Hundreds of people come to admire it every day. The main secret of the shrine is hidden in the clock on its facade. To find it out, you need to come to the church at Sunday's noon. A round dance of clock figures is launched only once a week, and no visitors to the city should miss this sight.
Guide to Nurnberg sightseeing - things to see and to visit
Despite the fact that Nuremberg is quite an old town, it perfectly combines ancient traditions and modern life. It doesn’t look like the majority of old cities of Europe, which are …

Open
The peaceful romantic city also has Red light district, a walk along which would be of interest to all fans of exotic entertainment. This quarter has much in common with the legendary one located in Amsterdam, at least window shows are no less impressive here.
Those who prefer more traditional locations will be like walking through the central city streets. Here, each house can safely be called a unique attraction. If you look at facades, on each of them you can notice unusual carved balconies, old signs, skillful painting, and other decorations - each historic house keeps its secrets. Copyright www.orangesmile.com
Family holidays with kids in Nurnberg. How to entertain your child, things to show to children.
Even though Nuremberg cannot offer its guests lots of large entertainment centers, but there are still interesting family-friendly facilities here. Schwarzlichtfabrik 3D Minigolf is a great …

Open
Nuremberg's most popular attractions are Albrecht Dürer's House (Albrecht-Durer-Strabe) and a rabbit sculpture located nearby. A huge number of tourists come to see them every day. After admiring the outstanding sights, do not rush to leave the lively tourist area. At the exit from the square, look for a small restaurant that will be easy to distinguish from others by its peculiar interior. The restaurant’s hall is decorated with old ski equipment, but the original design is not the first thing the place is highly valued for. Here you can taste delicious creamy chestnut soup, as well as the famous smoked beer “Rauchbier” that originated in the town of Bamberg. 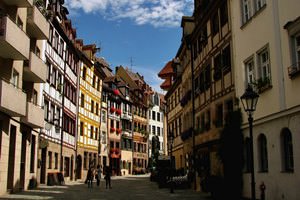 In other words, beer lovers will have more than enough opportunities for an exciting holiday in Nuremberg. BarfuSer Brewery can be found in the city center. It was opened in 1994 in a unique 15th-century building, which was used as a granary several hundred years ago. Today, the large-scale building houses a wonderful brewery and a restaurant with a hall capable of accommodating up to 600 guests at a time. The place is distinguished not only by the highest quality of the amber drink and the variety of treats but also by its interesting atmosphere. The restaurant hall is decorated with interesting antiques, including old beer bottles and black and white photographs.
Cuisine of Nurnberg for gourmet with top restaurants and cafe
A typical Bavarian city of Nuremberg is identified by many tourists with traditional Bavarian sausages. These roast sausages can be justly called an ethnic treat served to city guests as in …

Open
Well, Baggers can safely be called Nuremberg's most original and ultramodern restaurant. Everything in this restaurant is special: its setting, service, and specialties, of course. The original restaurant has no waiters - at the entrance, every guest receives a magnetic card recording data on the orders. The restaurant is equipped with many touch-screen displays, and all visitors are briefed on how to use them. The modern displays can be used to open the menu, find out the necessary information about dishes, and make an order. The most interesting thing begins after placing an order, as there are no waiters in the restaurant. All tables are equipped with special rails on which trays with dishes are gently delivered to guests. Fans of high standards should know that the restaurant's speed of service, just like the quality of food, deserves the highest praise.

This article about ideas on extraordinary weekend in Nurnberg is protected by the copyright law. You can re-publish this content with mandatory attribution: direct and active hyperlink to www.orangesmile.com.
Nurnberg - guide chapters 1 2 3 4 5 6 7 8 9 10 11

♥   Restaurant 'Gatto Rosso' Nürnberg-Schweinau. Type - Italian. 3 km from the center. On the map

Survived castles around Nurnberg
♥   Castle 'Cadolzburg' , 15.9 km from the center. On the map

Art galleries in Nurnberg and around
♥   Art museum 'Neues Museum Nürnberg' Nuremberg, 0.7 km from the center. On the map

Public palaces near Nurnberg
♥   Palace 'Altenburg Castle' , 49.7 km from the center. On the map

♥   Palace 'Alte Hofhaltung and Neue Residenz' Bamberg, 50.6 km from the center. On the map

Notable celebrations and festivals in Germany

Munich
Many travelers visit Munich only during the days of internationally famous Oktoberfest festival. However, one can enjoy delicious beer all year round. It is also possible to visit interesting places and learn much new about the “beer capital” of Germany. Munich is home to a creative “endless staircase” – an ideal training machine for those who want to lose weight ... Open »
Salzburg
The old and aristocratic Salzburg is suitable not only for sightseeing and admiring historic landmarks. There are many unusual and even odd places of interest in the outskirts of the city, and the Eisriesenwelt ice cave is one of them. One of the entrances to the cave is located in the immediate Salzburg suburbs. Eisriesenwelt is the largest ice cave in the world and has the ... Open »
Innsbruck
Igls is another popular destination for fans of extreme as this is where the 1,270 meter long Olympic bobsleigh trail is located. Here travelers have a rare opportunity to make a thrilling ride in a real Olympic bobsled together with a professional instructor. The cost of such an entertainment is relatively not high – around 100 euro. If you visit Innsbruck in summer, don’t ... Open »
Prague
An ordinary walk on Prague streets can leave many unforgettable memories because there are many amazing monuments and sculptures everywhere. One unusual monument is located close to the German embassy, the incredible monument is called Quo vadis and looks like a bronze car with legs. There is one more unusual monument on Resslova Street – a “dancing house”. Don’t ... Open »
Dresden
When you’re hungry, don’t go to one of the nearby cafes and head to Molkerei Pfund instead. This old dairy shop is located on Bautzner Straße. Here you can drink a glass of delicious milk or kefir just for 1 euro, try different sorts of local cheese and other delicacies made from milk. This shop opened yet in 1879 and so it’s also a beautiful historic place. There are ... Open »
Zurich
Are you thinking of souvenirs from Zurich for friends and family? While walking on the central street, don’t forget to find Alfred Bert. This unique postcard shop doesn’t offer ordinary postcards with landscapes that are easy to bend and to lose. It’s impossible to lose a magnificent half-meter large postcard with a mesmerizing panorama of Zurich, same as it’s ... Open »

Walk through hidden local streets, sneak to a small cafe, breathe and enjoy Nurnberg from inside. Stay out from the beaten track during your city weekend, discover the soul of Nurnberg as a real travel gourment. Follow our guide, take one of the exclusive services and spend your time in Nurnberg unforgettably and with a full passion!