Cuisine of Munich for gourmets. Places for dinner - best restaurants 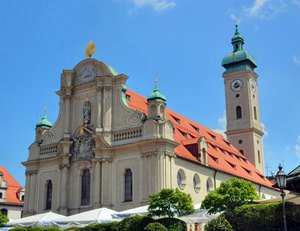 In order to appreciate a culinary variety, which is offered to guests by Munich restaurants, you should spend a bit more time in the most popular dining facilities of the city. Casa de Tapas restaurant is famous for serving delicious Spanish cuisine, as well as most popular sorts of Spanish wines. The restaurant’s menu contains largest choice of amazing delicacies. Visitors also order many exotic cocktails – they are gorgeous here.
Cultural vacation in Munich - fantastic architecture and monuments
Munich Frauenkirche, Blutenburg Castle, Maximilianeum, Glyptothek, New St. John Church, as well as many others, they all become the world's cultural heritage objects and remain as iconic monuments for Munich …

Open
Sushi Zen restaurant is the best institution in the city dedicated to Japanese food. Traditional sushi and sashimi, largest choice of drinks and the restaurant’s atmosphere of joy will help to get wonderful rest here. This restaurant is also perfect for rest of a large company. Of course, there are many restaurants in the city that are dedicated to national cuisine. Don’t forget to try excellent Bavarian snacks that are served in Andechser am Dom restaurant. Sausages, cold cuts, meatballs with spices and potatoes with pickled vegetables cooked in accordance with traditional recipes - these are the specialties of this amazing place.
Acquarello is a beautiful restaurant that is included in the top 100 of the most attractive gastronomic institutions in the world. The specialty of Acquarello is ravioli served with parmesan cheese. Guests will be surely delighted by wonderful desserts and a large selection of drinks. Osteria Italiana restaurant is known as a permanent place of rest of celebrities. The restaurant specializes in the preparation of dishes of national cuisine. It welcomes its guests for more than a hundred years and has become a real tourist attraction. Copyright www.orangesmile.com
Guide to Munich sightseeing - things to see and to visit
Munich is one of the richest and most expensive cities in Europe. It was founded in 1158 by Henry the Lion, the Duke of Saxony and Bavaria. Since 1806 Munich has been the capital of Bavaria. …

Open
Fans like Spanish cuisine simply cannot neglect Enchilada restaurant. In addition to widest choice of meat dishes with vegetables and traditional tacos here are served many unique delicacies. In addition to high quality wine, visitors are offered to select from more than a hundred cocktails. On evenings Enchilada often become the venue for musical concerts. In Munich you will find even restaurants dedicated to Lebanese cuisine. The most famous of them is Sahara city. Roast lamb with fragrant curry, delicious sweets and traditional oriental hookah – this restaurant has everything you need for rest. Seafood dishes make up the basis of the Outland restaurant's menu. Here are also served Australian delicacies, such as kangaroo meat, grilled sirloin steak and crocodile sharks. 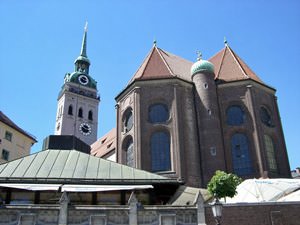 Munich is a fabulous place to get acquainted with the traditions of Bavarian cuisine. The local cuisine is quite simple. Popular national dishes are savory and are usually served in big portions. Meat dishes make up the basis of the regional cuisine. As a rule, they are served with such garnishes as potatoes, mushrooms or fresh vegetables. Sülze is a very interesting meat dish. It is a special type of meat jelly that is available only in Bavaria.
Family holidays with kids in Munich. How to entertain your child, things to show to children.
Coco Loco remains one of the most popular play centers in Munich, so it can be recommended for travelers with children. It’s a true paradise for kids who can easily spend a whole day …

Open
Obatzda is an original national snack. This is a tender paste, the key ingredient of which being camembert cheese. Travelers will find variations of this popular snack in numerous restaurants and pubs that always serve the paste with freshly baked bread. Potato dumplings are also among casual dishes in the region. Locals call them Kartoffelklöße. Talking about vegetable dishes, it would be a mistake not to mention Sauerkraut. It is fermented cabbage that contains apples. This vegetable garnish is a popular addition to numerous meat dishes. Pork shank or Schweinehaxe is a mandatory dish in menus of all restaurants specializing in the national cuisine. 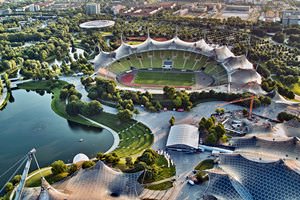 Travelers wishing to try something unusual in Munich should order Sauerbraten in one of the regional cuisine restaurants. This is the term for stewed beef that is cooked in quite a complicated way. Before cooking, the meat is marinated several days in a mix of wine, vinegar, and various spices. During the cooking process, raisins are added to Sauerbraten, so the ready meat has a simply mesmerizing taste and flavor.
Authentic traditions, festivals and lifestyle of Munich inhabitants
Local residents are characterized by careful attention to compliance with all regulations and laws. Respect for law is one of the main national features. Besides this, the residents of …

Open
Even salads are very hearty and nutritious at local restaurants. Kartoffelsalat is a great example. As one can guess from its name, potato is the main ingredient of the dish. Vegetarian guests will find it interesting to try Gurkensalat that contains cucumbers and greens. Fans of pastries will also not feel disappointed in Munich. They are recommended to try Agnes Bernauer cake that contains various nuts and delicious buttercream. 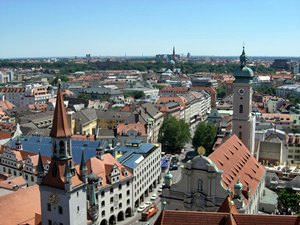 Dampfnudel is a typical national dessert. The steamed roll is cooked in a special milk sauce. Traditionally, Dampfnudeln are cooked in special small pots. Bayerische Crème is one more interesting regional dessert. The recipe of Bayerische Crème has not been altered for several centuries already. The delicious dessert is usually served with various fresh fruits and berries. Beer remains the most popular national drink in Munich, so there is nothing strange in the fact that this city has become the location of the most famous beer festival in the world.

This guide to cuisine and restauraunt in Munich is protected by the copyright law. You can re-publish this content with mandatory attribution: direct and active hyperlink to www.orangesmile.com.
Munich - guide chapters 1 2 3 4 5 6 7 8 9 10 11 12 13 14 15 16

Where to go for dinner in Munich: recommended cafe and restaurants

♥   Restaurant 'Zum Franziskaner' MÜNCHEN-MAXVORSTADT. Type - Country. 0.3 km from the center. On the map

♥   Restaurant 'Spatenhaus an der Oper' MÜNCHEN-MAXVORSTADT. Type - Country. 0.3 km from the center. On the map

♥   Restaurant 'Pfistermühle' MÜNCHEN. Type - Country. 0.3 km from the center. On the map

♥   Restaurant 'Kleinschmecker' München. Type - Creative. 0.3 km from the center. On the map 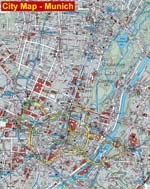 Searching where to eat - restaurants and cafe on Munich map

Cuisine and restaurants in the neighbours of Munich

Dachau
Try fragrant Asian kebab and oriental sweets in Koto restaurant, which has long won recognition from locals and holidaymakers alike. The restaurant's hall is decorated in full accordance with national traditions, which makes this place even more attractive in the eyes of visitors. Among Italian restaurants, culinary connoisseurs highlight La Dolce Vita. Several dozen types of ... Open »
Augsburg
La Commedia is known as the best restaurant serving Italian cuisine. This is the right place to try traditional risotto, several types of pasta and classic Italian pizza, as well various exotic delicacies and signature desserts. Delicious Italian wine will become a perfect complement to any meal. The restaurant has its own wine cellar with a very impressive collection. ... Open »
Landshut
Travelers who prefer the most upscale restaurants would probably be interested in Stegfellner. This restaurant occupying a beautiful historic building is one of the most expensive in town. It is here that you should look for the rarest and tastiest meat delicacies, as well as uniquely presented author's desserts. In addition to high Bavarian cuisine, they serve popular ... Open »
Ingolstadt
Among budget dining establishments in Ingolstadt, it is important to mention Schanzer Rutschn restaurant, the menu of which always features a broad range of salads, hot sandwiches, and drinks. In Ingolstadt, there are restaurants for any taste. Locals and numerous guests of the city like Goldener Drache restaurant that specializes in oriental cuisine. Popular Thai, ... Open »
Bavaria
Thus, swine hakse pork is stewed for several hours in a sauce of dark beer, so meat turns incredibly tender and flavorful. A very popular treat is zauerbraten stew. Local restaurants necessarily offer a huge selection of sausages to complement beer. Knodel and sauerkraut have remained the most popular side dishes for many centuries; they have been served in addition to meat ... Open »
Garmisch-Partenkirchen
The basis of menu of Max restaurant is represented by dishes from German cuisine. However, local chefs prepare excellent and popular dishes from the international cuisine. Mukkefuck bistro is a perfect place for rest after a busy day full of sightseeing. Fresh salads, sandwiches, hot and cold drinks – the restaurant’s menu simply strikes visitors with its diversity. ... Open »

Travel notes on best cuisine and restaurants of Munich (Germany) on OrangeSmile.com. Famous recipes and traditional dishes and courses in Munich restaurants. Where to eat - our recommendations on popular places in Munich, where you can taste delicious meal and also spend a good time with your friends.