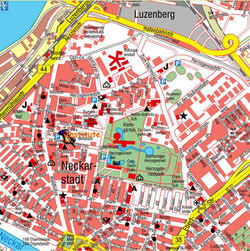 Interactive maps of hiking and biking routes around Mannheim

1. You can zoom in/out using your mouse wheel, as well as move the map of Mannheim with your mouse.
2. This interactive map presents two modes: 'Biking Routes' and 'Hiking Routes'. Use the '+' button on the map to switch between them.

This Mannheim map has two modes: 'Railway Network' and 'Landscape & Rural Map'. Use the '+' button on the map to navigate.

Our guide to Mannheim

The Thai cuisine restaurant named Supan's is another original destination to pay a visit. During daytime it serves as an excellent place for business meetings and evenings the restaurant features inimitable romantic ambience. Visitors should reserve tables in advance as each evening the Supan's restaurant is visited by many regular guests. The Tokyo Sushi restaurant will be of great pleasure for exotic cuisine … Open

Traditions and mentality of Mannheim

The thriftiness of local residents is also often the subject of controversy and jokes of residents of the surrounding areas. Historically, Mannheim was formed in a fairly poor agricultural area. For hundreds of years, locals worked for the benefit of a rich harvest, and then put a lot of effort to save the grown vegetables. Despite the fact that the hard times for the city were far behind, thrift has remained a … Open

The main natural landmark of the city and its environs is the Neckar River. On the banks of this river, there are many interesting sights. Travelers can stroll along the beautiful embankments, see the old bridges and admire the marvelous natural landscapes. The most active tourists can make a trip along the bank of the river and get to the surroundings of Mannheim. Near the city, there are several old towns with a … Open

Mannheim for children - what to visit

There are several excellent museums in Mannheim, some of which will be interesting to visit with children. One of the most extraordinary museums is Technoseum Mannheim. The exposition of this technology museum tells visitors about the greatest technical achievements of the last 200 years. Many of the exhibits in this museum can be touched; a fact that is sure to please children. During the tour, visitors will be … Open

Anyone who pays attention to exquisite accessories will be interested in Franco Francone store. It sales watches, the store is focused on a wide range of customers. It always presents a decent selection of watches brands Marelloc and Mido, the cost of which is 500-600 euros, and the wealthiest buyers will be offered elite models of watches Ebel, which are not less than 1 500 euros. Travelers with limited … Open

6. Shops and public offices get .open at 9 am and work till 6 -7 pm. Thursday is considered to be a prolonged working day. Top banks, post offices and shopping centers may work till 8pm. Saturday is considered to be a shortened working day. All the shops and other institutions and establishments are close till 16.00. 7. Tipping for good restaurant and café service is a common practice. 10% of the … Open