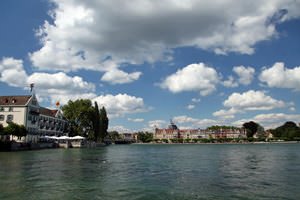 If you like history Konstanz can offer landmarks of different ages, as many of historical monuments have preserved here. Ancient fortification has survived also. ‘Powder Gate’ was used as powder cellar during medieval age and as prison later on. Due to nature of tower workers local citizens sometimes call it ‘Jewish Tower.’ Famous basilica of Pope received its present name not so long ago, in 1995. It is one of the oldest buildings of the city; the very first church here was built in 590.
Guide to Konstanz sightseeing - things to see and to visit
Konstanz is an ancient city located on the bank of the Rhine River. Over a thousand years ago the Romans founded here a camp that was named after Constantius Chlorus – the great Roman …

Open
In few centuries, tiny Episcopal church turned into a massive building; it was continuously reconstructed and supplemented with new facilities. The height of the Basilica’s tower is 76 meters, a long time it remained the tallest building in Konstanz. Many interesting landmarks, including the building of the Council of Konstanz, are located in the port area. Here, in 1417, Pope elections were held, the old building has witnessed many important events. Originally the building was used as a port warehouse, throughout the course of history it has repeatedly changed its status. Today in this beautiful historic building a famous restaurant is located.
Not far from the cathedral is the so-called Cultural Center, which includes a number of historic buildings and galleries. Tourists may visit Wessenberg gallery, old town library, the building of the Department of Culture and a number of landmarks built during the Middle Ages. While walking around the city, vacationers can see a lot of interesting monuments and sculptures; one of the most unusual monuments is located in the port area. Copyright www.orangesmile.com
Family holidays with kids in Konstanz. How to entertain your child, things to show to children.
In Konstanz, there is no difficulty in finding fascinating entertainment for tourists with children. A great place for a family holiday is the Bodensee-Therme Konstanz - a modern indoor …

Open
This is a sculpture of ‘Imperia,’ which is a figure of 18 meters height. Large-scale statue weighs 18 tons and has not only decorative, but also practical value. The pedestal, on which the statue is mounted, is used as a measure of the water level. A lot of interesting museums and galleries work in Konstanz. Archaeological Museum and Rosengarten Museum are extremely popular among visitors; the exhibition there is devoted to medieval art. The Rosengarten Museum often houses exhibitions of contemporary artists and sculptors. 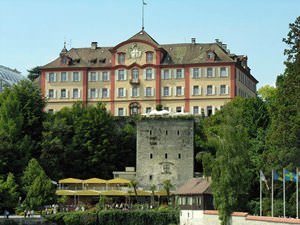 The most famous native of Konstanz is Ferdinand von Zeppelin, the inventor famous for his airships after whom the legendary LZ-127 was named - once the largest airship that made the first transatlantic flight in history. It is no wonder that now airships are a kind of symbol of the city and a separate museum is dedicated to them - the Zeppelin Museum Meersburg (located in the suburbs of the city, in the town of Meersburg). Here one can learn more about how airships are manufactured, about the life of Count Ferdinand von Zeppelin, as well as watch a film about the Hindenburg disaster. Another airship museum is also located not far from the city, in Friedrichshafen, where LZ-127 stopped during its round-the-world flight. Here you will see full-size models of airships.
Cuisine of Konstanz for gourmet with top restaurants and cafe
Fans of German cuisine would enjoy the rest in Konstanz as in local restaurants chefs prepare all the most popular national dishes. Foreign tourists like pubs very much, because there, in …

Open
Hus-Haus was Jan Hus' home until his arrest in 1414. The half-timbered mansion museum tells about the life and ideas of the key figure in the Czech Reformation. A visit to Pfahlbauten Unteruhldingen feels like a journey a few thousand years back into the past. Settlements of this age have been found near Lake Constance during archaeological excavations over the past 150 years. Pile wooden houses typical of the Alpine terrain, recreated exteriors and interiors, wooden bridges - once you see such beauty, you won't be able to pass by. By the way, the museum is listed as a UNESCO World Heritage Site. The history of Konstanz' most important natural sight and its surrounding area - of course, this is about Lake Constance - can be learned in a specialized museum - Seemuseum. 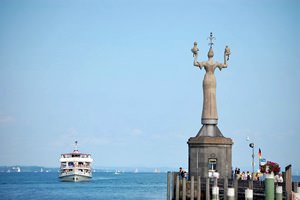 Burg Meersburg, one of the oldest castles in Germany, is worth a visit as well. The first mention of the ancient 7th-century building dates back to 1147. In the castle museum, one can see antique furniture, ancient household items, weapons, works of art dating back to the Middle Ages. One of the main rooms in the museum is a torture chamber, and on the very top of the tower, one can find a great observation deck. In addition to Burg Meersburg, the Neues Schloss Meersburg can be found in the city - a baroque building from the 18th century known as a former residence of the Prince-Bishop of Constance.
Authentic traditions, festivals and lifestyle of Konstanz inhabitants
Konstanz hosts lots of national festivals which would be quite interesting to visit. The Seenachtfest traditionally runs early in August. It has been held for more than sixty years, but …

Open
A treasure of Lake Constance is Schloss Mainau standing on top of a hill The castle was built in the Baroque style in 1746 by order of the Teutonic Order. Nearby is the Schlosskirche St. Marien, which forms a beautiful ensemble together with the castle. Today it is the residence of the Swedish Prince Bernadotte. The ground floor with a gift shop and a gallery is open to the public. Travelers can also enjoy a stunning park surrounding the beautiful palace. Among the religious attractions worth noting is Sankt Stephan Kirche with a beautiful interior (magnificent stained glass windows and altar) and no less impressive exterior featuring delightful bas-reliefs and sculptures. 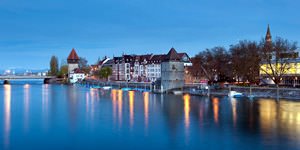 Universität Konstanz is striking with its magnificent modern design, all the more so since it was built in 1966. Today it is considered one of the elite educational institutions in Germany where every second student wants to enroll. Zum Hohe Hafen, a mansion located on Konstanzer Obermarkt, is one of the most colorful places in town. The thing is that its walls are painted with magnificent frescoes depicting significant figures in the history of the city (Frederick VI, Emperor Wilhelm II). Other interesting buildings in the square include Hotel Barbarossa. It was here that Frederick I Barbarossa signed a peace treaty with the Lombard League (which happened in 1183). Besides that, Obermarkt once accommodated the city court building and a pillory.

In the section below, you can get one of our excursion, activities or city discovery tours over Konstanz and surroundings. Our website offers 10-30% lower ticket prices, when compared to the offline purchase on the spot.

City tours, excursions and tickets in Konstanz and surroundings

This guide to cultural sights Konstanz is protected by the copyright law. You can re-publish this content with mandatory attribution: direct and active hyperlink to www.orangesmile.com.
Konstanz - guide chapters 1 2 3 4 5 6 7 8
Reference information
Map of all palaces

Public palaces near Konstanz
♥   Palace 'Burg Meersburg' , 7.2 km from the center. On the map

Cathedrals and basilicas near Konstanz
♥   Münster St. Maria und Markus, Reichenau, 9.8 km from the center. On the map

♥   Liebfrauenbasilika, Rankweil, 56.1 km from the center. On the map

♥   Kathedrale Pfarrkirche St. Florin, Vaduz, 64.3 km from the center. On the map

Photogallery of cultural heritage of Konstanz

Excursions over cultural sights of neighbours of Konstanz

Winterthur
No less popular cultural institution is the Museum of Photography, which hosts exhibitions of contemporary photo art masters. Visitors to the Swiss Science Center Technorama can learn a lot of interesting things about the world around and take part in interesting experiments. All the museum's collections are devoted to the natural sciences. Visitors can not only see the ... Open »
Bregenz
The Old Town Hall is a popular excursion destination for tourists in Bregenz. Built in 1662, the beautiful town hall is now a residential building. When it comes to describing family estates, it is worth noting Deuring Palace. The magnificent 17th-century building is surrounded by a beautiful garden with antique monuments and statues. Its spacious halls still keep the ... Open »
Zurich
Liebfrauen Catholic Church was built a little earlier, in 1893. The name of the church is literally translated as "Beloved Woman". In the hall of the church visitors can see a beautiful statue of Madonna, and the walls of the church are decorated with skillful paintings, which are the creation of the famous artist Fritz Kunz. Predigerkirche tower is one of the oldest monuments ... Open »
Luzern
The Mill Bridge is of the same high interest. It features a unique zigzag form and crosses the Reuss river. The construction of the covered bridge was finished in 1408 after which the famous artist Kaspar Meglinger decorated the bridge with plague paintings. The medieval fresco paintings resemble the local folks and city visitors of another significant event – plague ... Open »
Ulm
The Sebastiankapelle located there was built in the early 15th century, as well as Zeughaus. There is also one of the most extraordinary sights, the Einstein-Brunnen, opened in 1984. Other major attractions are Seelturm Tower and Grabenhäusle medieval districts. No less attractive is a fishermen district (Fischerviertel). This is where the legendary House of Oaths ... Open »
Freiburg im Breisgau
In the historic district there is Freiburg City Theater, the oldest and most beautiful theater in Freiburg. It was opened more than a hundred years ago. Today, the theater has four beautiful rooms and regularly delights its guests with bright premieres. In addition to theatrical productions, a variety of cultural events is carried there. There are a lot of old buildings in ... Open »

Culture guide to Konstanz. Which fascinating sights to visit once you are in Konstanz: temples, churches, museums, theaters and castles. Recommendations (with addresses, phone numbers and links) on the places 'must visit' in Konstanz. Plan your own city excursion by using this page info!