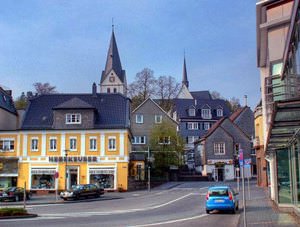 Gummersbach is a paradise for tourists preferring calm and quiet cities, where people are never in a hurry. Here, life flows measuredly, like a walk in a park, which would be a real gift for those who decide to visit Gummersbach. Speaking of parks worthy of visiting while in Gummersbach, Zweckverband Naturpark Bergisches Land is the most popular one. On its territory, here is a lot of interesting sculptures. Stadtgarten looks very well-groomed and is the real “eye candy” because of this fact. Just outside the city is Sitzgelegenheit, which is a great location for fans of "wild" parks.
Top hotels in Gummersbach for business trip or short vacation
Miniature Gummersbach is not deprived of attractive hotels. One of the most prestigious and upscale accommodation options in the city is Wyndham Garden Gummersbach. This hotel was founded in …

Open
The city has preserved several interesting castles and mansions. Among them, it is worth highlighting Vogteihaus. It is framed by a wrought iron fence, which is a kind of work of art. Once the building’s calling card was its baroque staircase but it has been replaced by a modern one. Speaking about the house's history, it is worth noting that it was built at the end of the 19th century, renovated in 2011, and got its present-day look in the same year. Since recently, the building has become a symbol of Gummersbach.
A wonderful piece of architectural art is Vorbeckentalsperre bridge. Its views of the river Agger staggers the imagination, so you should never avoid this construction. Excellent views are also offered by the viewing platform Aussichtsturm Ruine Meerhardtfels. The tower was built on Meerhardt Hill 291 meters above sea level in 1908. From here you can enjoy views of neighboring Dieringhausen and Aggertal. You can get here by steep Schwindsuchtsteppe, which is 64 steps connecting Dieringhauser Straße and Merhardtstraße. Copyright www.orangesmile.com
Extraordinary weekend in Gummersbach - unusual places, services and attractions for travel gourmet
…

Open
Another great viewing platform is Aussichtsturm Knollen offering views of the Rhine Valley in the west, mountain landscapes in the northeast, and Westerwald in the south. The 446-meter-high observation platform was built in 1975. You can have a great time walking through the Westfriedhof. Despite the fact that it is a cemetery, it's very peaceful here, so walking can be an alternative to a regular walk in a park. It's also worth noting another interesting building, both in terms of architecture and the fact that here you can have a great time enjoying a cultural program. It's about Theater der Stadt Gummersbach. 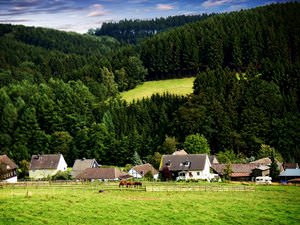 Burgruine Eibach is a must-have for all history buffs. The ruins create a fantastic atmosphere of the touch of antiquity. The castle built in the middle of the 14th century was the family castle of the knightly von Neuhoff family, after that - the Seraing family. The castle burned down in 1782, leaving only a round tower in the south-east. Its restoration was carried out at the end of the 20th century, and today the castle can be considered one of the most interesting sights of Gummersbach and the state.
Guide to Gummersbach sightseeing - things to see and to visit
Gummersbach is a town that is referred to Köln administrative district. The town was founded in the Middle Ages; nowadays this is a center of Oberbergisch district. The population of the …

Open
Nearby you can find Burg Neuenberg. The fortress dating back to the 12th century is one of the oldest buildings in the region. The castle belonged to counts of Berg. Having survived the capture by Swedes in the Thirty Years War, the building was destroyed in 1640, leaving behind only part of its external walls, entrance, and moat. Nearby is another interesting place - namely, stalactite and limestone cave Zwergenhöhle (literally "dwarf cave"). It is located on Mount Lindlander. The grotto is remarkable for the fact that the remains of prehistoric ships were found here. Behind its name is a beautiful legend that you should listen to carefully when visiting the cave. 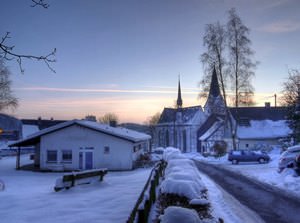 It is worth mentioning the Schloss Ehreshoven, which is located near LVR-Freilichtmuseum Lindlar. The castle's stunning architecture immediately draws the attention, the building itself rises 114 meters above sea level. The first mention of the fact that there was a castle at this place dates back to 1355 when it was a very small building. Since that time, other buildings were added to the castle, as well as other changes introduced - for example, a French garden striking in its beauty, and the castle itself was rebuilt in the Baroque style. The building was severely damaged During the Second World War but successfully restored later.
Cuisine of Gummersbach for gourmet with top restaurants and cafe
Apart from numerous national restaurants serving German cuisine, visitors to Gummersbach can visit a lot of other attractive gastronomic establishments specializing in various culinary …

Open
Get acquainted with the culture of the region in the Heimatmuseum where among exhibits you can see everyday objects of local residents' ancestors in different eras. The building seems attractive from the first minutes - the thing is that it is built in the style of Fachwerk, evoking associations with the traditional German half-timbered house. Another museum is dedicated to rail transport and is called the Eisenbahnmuseum. Here you can see models of various locomotives and trains. In the vicinity of Gummersbach is Historische Brennerei Rönsahl introducing foreigners to the history of brewing and liqueur-making in the region. This place is quite distinctive, and therefore deserves the attention of any traveler.

In the section below, you can get one of our excursion, activities or city discovery tours over Gummersbach and surroundings. Our website offers 10-30% lower ticket prices, when compared to the offline purchase on the spot.

City tours, excursions and tickets in Gummersbach and surroundings

This guide to cultural sights Gummersbach is protected by the copyright law. You can re-publish this content with mandatory attribution: direct and active hyperlink to www.orangesmile.com.
Gummersbach - guide chapters 1 2 3 4 5 6 7
Reference information
Map of all palaces

Public palaces near Gummersbach
♥   Palace 'Electoral Palace' Bonn, 45.8 km from the center. On the map

Cathedrals and basilicas near Gummersbach
♥   Dom St. Peter und Maria, Köln, 42.7 km from the center. On the map

Photogallery of cultural heritage of Gummersbach

Excursions over cultural sights of neighbours of Gummersbach

Wuppertal
The opening of the abovementioned Botanical Garden took place in 1890. Today this is one of the most magnificent and beautiful gardens in Germany. The huge territory of the garden has become home to numerous tropical crops. During an excursion in the garden visitors will see approximately four hundred exotic plants. The garden is divided into several thematic zones. Its ... Open »
Leverkusen
Popular entertainment for visitors to the city is a visit to the Water Tower, which is a must-have part of most local guidebooks. The height of this tower is 72 meters, it was built in 1978 to supply water to local industrial centers and residential buildings. The tower has an unusual structure and is visible from many city streets. Now it is used not only for its intended ... Open »
Langenfeld
Nearby is another picturesque Church of St. Jacobus, which is now located on the territory of a beautiful garden. The historic building built of brick is surrounded by ancient trees. This church is remarkable for its elaborate stained glass windows occupying a large part of the facade area. Such windows make the brick church look refined, it is one of the oldest churches in ... Open »
Bonn
Schaumburg Palace, the building of which was completed in 1859, is a no less famous landmark of Bonn. Right after the building of the palace a beautiful large garden was laid next to it. Even nowadays the garden remains a favorite place of rest among both residents and travelers. Among the religious attractions of the city we simply cannot fail to mention Church of Jesus ... Open »
Dortmund
Dortmund is home to a huge variety of museums. Museum of art and culture has always remained one of the most beloved places for tourists from all over the world. The location of the museum is also very interesting - a beautiful building of the early 20th century. The halls of the museum feature a rich collection of ancient sculptures, paintings, antique furniture and crafts. ... Open »
Bochum
Stiepel Priory, also known as the Cistercian monastery, is a no less interesting religious landmark. The opening of the monastery took place in 1988. The beautiful modern building is surrounded by spacious squares and avenues, and even a gorgeous park. Every month, the monastery hosts wonderful performances of church music. Tourists should not forget to see the ancient ... Open »

Culture guide to Gummersbach. Which fascinating sights to visit once you are in Gummersbach: temples, churches, museums, theaters and castles. Recommendations (with addresses, phone numbers and links) on the places 'must visit' in Gummersbach. Plan your own city excursion by using this page info!