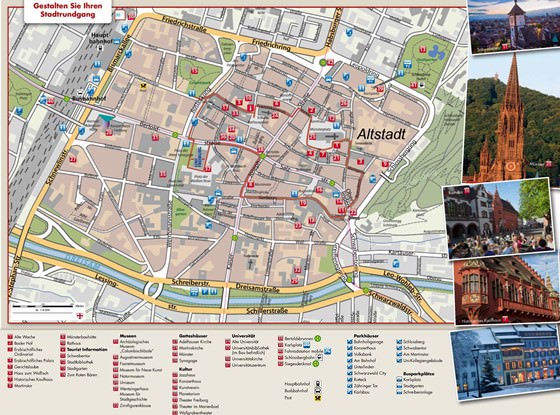 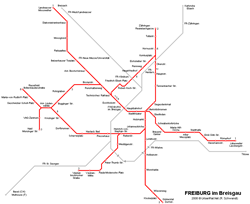 Search for services, infrastructure and sights on map of Freiburg im Breisgau

Freiburg enchants with its harmonious and spiritual atmosphere from the very first minute. It is the city with the unique culture that has a lot of unique legends, customs and beliefs. Travelers who visit Freiburg in early spring are advised to stroll through the historic district. At this time of the year it looks unique; you can see thin rivulets along sidewalks everywhere. Locals call them ‘bächle.’ Many … Open

A lot of exciting historical buildings can be seen near the Oberlinden square. The house of the old Zum Roten Baren inn is considered the most amazing attraction of these places. According to some data, it is the oldest of the remaining inns in Germany. Its opening took place in 1120. It is notable that a small hotel is still operating in a unique building today. There is a famous restaurant of regional cuisine on … Open

5. There are special bike lanes close to all major roads and highways making travel even safer. Don’t confuse these lanes with sidewalks for pedestrians, as latter have their special walking areas. 6. To rent a car you have to provide a passport, a driver's license and a credit card with the desired amount of deposit on the account. Those under 21, as well as those who have less than a year of driving … Open

Fans of healthy eating would be pleased with the Kreuzblume restaurant. All its dishes are made of organic ingredients; the menu contains a decent selection of vegetable dishes and light desserts. The restaurant is located in the historic part of the city, so many of its visitors are tourists. The Isle of Innisfree pub invites to enjoy a beer and branded snacks in the relaxed atmosphere. It's the real Irish pub … Open

Freiburg is home to one of the largest and well-known entertainment venues in the country; its Europa-Park offers hundreds of interesting ways to spend leisure time. There is the highest in Europe roller coaster of 70 meters height in the park. The extensive territory of the park is divided into 11 zones, each of which is devoted to a single country. There are more than one hundred of incredible rides in the complex. … Open

In the historic district there is Freiburg City Theater, the oldest and most beautiful theater in Freiburg. It was opened more than a hundred years ago. Today, the theater has four beautiful rooms and regularly delights its guests with bright premieres. In addition to theatrical productions, a variety of cultural events is carried there. There are a lot of old buildings in the city; one of the most spectacular … Open