Preparing your trip to Freiburg im Breisgau: advices & hints - things to do and to obey 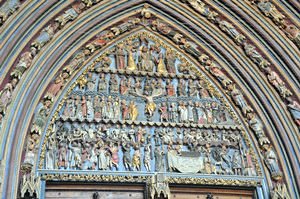 1. You can easily travel around the city by public transport. The most suitable transport for excursion fans is a tram, as it runs through all the important sights. Those who expect to use public transport actively are recommended to buy a travel pass, as it will save considerably.
2. It’s worth noting that locals speak special dialect. It won’t be easy to understand even for those who are fluent in German. In hotels, restaurants and stores staff is usually speaking classic German.
3. Shoppers will be interested in visiting the city on Christmas Eve, as there are grandiose sales at local shops. It should be noticed that the majority of big stores and shopping centers doesn’t work on weekends; on weekdays working day ends no later than 8:00 pm.
4. A bike is a common mode of transport in Freiburg; you can rent it at one of the many rental centers. No special documents for rent are necessary; it is enough to leave a certain amount of deposit.
5. There are special bike lanes close to all major roads and highways making travel even safer. Don’t confuse these lanes with sidewalks for pedestrians, as latter have their special walking areas. Copyright www.orangesmile.com
6. To rent a car you have to provide a passport, a driver's license and a credit card with the desired amount of deposit on the account. Those under 21, as well as those who have less than a year of driving experience may be denied service. In some companies, the minimum age is 25 years.
7. Drivers should obey local rules of the road; heavy monetary fines are charged for violation. All passengers in the vehicle and the driver must wear seat belts.
Cuisine of Freiburg im Breisgau for gourmet with top restaurants and cafe
Freiburg is sure to appeal to those who can’t imagine the rest without restaurants. The city has hundreds of dining places that specialize in a variety of culinary traditions. Among …

Open
8. Freiburg is situated close to hot springs near which there are large-scale health centers. Vacationers are certainly encouraged to visit one of them; local wellness services feature diversity and high quality.

Preparing your trip to Freiburg im Breisgau: advices & hints - things to do and to obey You can re-publish this content with mandatory attribution: direct and active hyperlink to www.orangesmile.com.
Freiburg im Breisgau - guide chapters 1 2 3 4 5 6

What to visit being in Freiburg im Breisgau - unique sights

Distance from Freiburg im Breisgau center - 31.1 km.
To the fans of the breathtaking attractions one can recommend 'France', where one of the most dangerous roller coasters of the park - 'Silver star' is located. The height of the roller coaster is 73 meters. 'Italy' and 'Spain', where the special arenas are equipped, will please the theatrical friends. The park, which is visited by approximately 5 million people annually, is situated on the extensive territory with the area of ​​62 hectares. At the disposal of the visitors, it offers more than hundred original attractions and the interesting daily entertainment program. … Read further

Distance from Freiburg im Breisgau center - 37.9 km.
Colmar is often compared with Venice because of an abundance of channels. The city even has a scenic area called Little Venice that is one of the most visited tourist destinations. The main value of the town is a number of well-preserved medieval buildings, which makes it different from many other modern cities. The permanent symbols of Colmar are House of heads, the Church of St. Matthew, which was built in the 13th century, as well as the Dominican monastery, which is a unique monument of the 13th century. Colmar is a real open-air museum sharing its unique cultural and gastronomic traditions. … Read further

Tips for the cities around Freiburg im Breisgau

Alsace
3. Shoppers should take into account that almost all local stores accept credit cards. It’s worth to carry a sufficient amount of cash, if you are going to visit street markets and small restaurants in remote towns of the province. 4. You can pay for purchases and services in euros only; any other currency won’t be accepted here. Money can be exchanged at any of the ... Open »
Basel
3. When you visit various excursions together with other tourists in a group, you are eligible for a discount, so the best place to explore the sights of the city is in a company of other travelers. Students and pensioners are also eligible for a discount. 4. If you plan to make a long walk, you are recommended to take a raincoat or an umbrella with you. Weather in Basel ... Open »
Strasbourg
3. July and August are the hottest months of the year; the average daily temperature during this period is about +25 °C. Many tourists visit Strasbourg in summer, also the high tourist season is during Christmas holidays. 4. The central part of the city is almost completely closed to vehicles; a popular mode of transport is bike. The most popular bike rentals among ... Open »
Winterthur
3. The most common souvenirs are watches, knives, and chocolate of local production, many also prefer to buy cheese as a souvenir. For watches, it's best to go to a specialized salon, because in street markets tourists can stumble on a cheap fake. A wide selection of chocolate and other sweets is available in such shops as Lindt, Tableron, Nestle, and Sushard. 4. It is ... Open »
Baden-Baden
3. When you plan to make a walk, you are highly recommended to take a copy of your identity card. It may be useful in case of police identity checks or when paying for goods by a credit card. 4. The city is distinguished by a huge number of public transport routes, which can easily bring you to all interesting and famous sights of Baden-Baden. 5. Taxi rates in ... Open »
Luzern
3. Tourists wishing to use the public transport for cruising the city and visiting the tours, should better buy a pass ticket Swiss Pass. It gives the right of free rides in public transport and discounts for tours visiting. The pass is available for purchase in tourist information center or in some hotels. 4. Bicycle is one of the most popular city transports. The main ... Open »

Travelling to Freiburg im Breisgau - advices and tips. What should be provisioned in advance, the rules you might want to follow, and the things you better avoid doing in Freiburg im Breisgau. We help you to make your trip smooth and easy, with no unexpected surprises.