Detailed hi-res maps of Bavaria for download or print 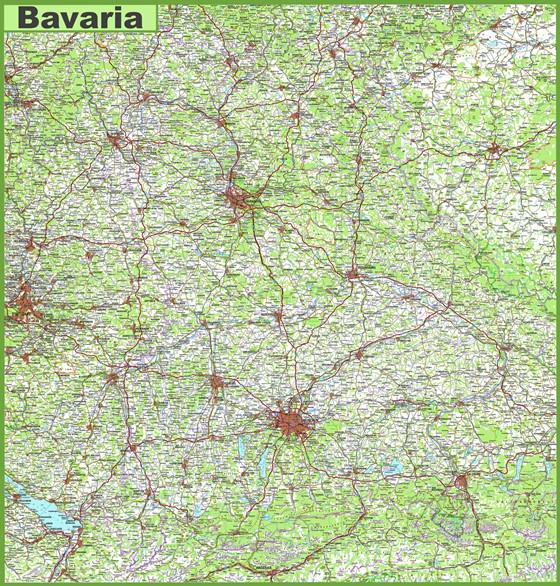 The actual dimensions of the Bavaria map are 3500 X 3665 pixels, file size (in bytes) - 5561436. You can open this downloadable and printable map of Bavaria by clicking on the map itself or via this link: Open the map. 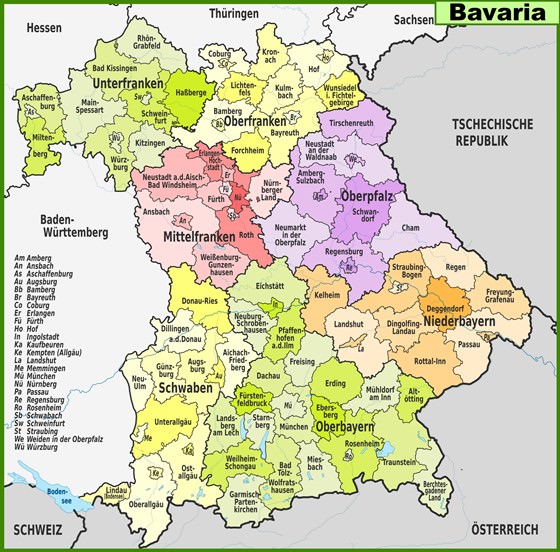 City tours, excursions and tickets in Bavaria and surroundings

Search for services, infrastructure and sights on map of Bavaria

Our guide chapters over Bavaria

The basis of the national cuisine consists of meats and there are no feasts without sausages and pates. Bavaria is famous for its upscale cheeses and delicious pastries. Speaking of elite varieties of Bavarian cheese, it’s certainly worth to mention the popular national snack, obatzda. It is a mouth-watering creamy mass of fresh butter and grated cheese with addition of fresh herbs. Appetizer is served cool … Open

Traditions and mentality of Bavaria

Indigenous people speak special dialect that won’t be easy to understand even to those who have excellent German. To test your skills you need to go to the marketplace in any Bavarian town and listen to natives talking with each other. Experts point out that even native speakers can’t make out the meaning of their conversation for the first time. Culinary traditions of indigenous people also deserve … Open

Bavaria is also famous for its healing thermal springs. On the territory of the region, there are over 70 balneological resorts. Some of them are upscale and specialize in treating serious diseases. More modest resorts suit those who are interested in general recovery and want to strengthen the body. The resort of Bad Bayersoien is distinguished by its excellent infrastructure. Another resort, Bad Feilnbach, is a … Open

3. Travelers who expect to use public transport have to consider that tickets have to be purchased in advance. There are special machines at all bus stops, where you need to buy a ticket, as there no busmen in the bus and tram selling tickets. 4. Gourmets shouldn’t prefer elite dining places, but small family restaurants that are present in abundance in all the Bavarian towns. These are places visited by … Open

Nearby there is one of the most famous theme parks, Legoland. This is a real fantastic country with beautiful buildings and fabulous inhabitants; every day, very interesting and enchanting entertainment shows are arranged there. There are 40 unique attractions just inside the park; there is a beautiful recreation area, shops and a cafe with a huge selection of sweets. Another outstanding entertainment venue is a … Open

The most striking monument of the 19th century is Neuschwanstein Castle. Every year it is visited by more than a million tourists; the beautiful castle is the most recognizable and popular in the country. The beautiful palace was built by King Ludwig II in just 4 years; its construction involved more than a thousand workers. Neuschwanstein Castle is located on a mountain top that gives it even more solid and … Open