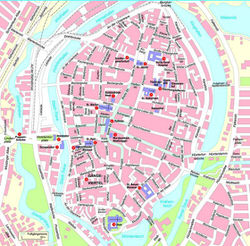 Interactive maps of hiking and biking routes around Lubeck

1. You can zoom in/out using your mouse wheel, as well as move the map of Lubeck with your mouse.
2. This interactive map presents two modes: 'Biking Routes' and 'Hiking Routes'. Use the '+' button on the map to switch between them.

This Lubeck map has two modes: 'Railway Network' and 'Landscape & Rural Map'. Use the '+' button on the map to navigate.

Our guide to Lubeck

5. The shops get open on or before 9.30 and are open till 20.00 with a short lunchtime during the day. On weekends the major part of the shops and centers is closed meanwhile the market places work only during weekends. 6. The shopping fans will love the city on the Christmas Eve. Lubeck presents a variety of grand fairs, sales and exciting buzzing market places during this period. 7. The … Open

Boat trips and luxury ship cruises are very popular water activities in Lübeck. Locals and tourists like billiards, and one of the best places for their favorite game is Billardcafe Fünününü where visitors can also find a wonderful bar with great cuisine. Those who want to play golf should head to the best golf center called Curau. It can be considered the best for several reasons, one of which is the club's … Open

Most ladies will be interested in Dechau store where they sell women's handbags and accessories. A fashionable Daikine bag will cost customers about 60 euros, and for 150 euros, they can choose a designer bag from Aunts & Uncles. The store also presents a wide selection of wallets, belts, jewelry, and other indispensable women's accessories, which are so necessary to create a perfect image. The largest and most … Open

Lubeck for children - what to visit

Lubeck is famous for its unique historical sites. However, there are also suitable places here for recreation with children. The most famous children’s landmark of the city is the amusement park Marchenwald. It is committed to the most famous children’s fairy tales in the world. The entertainment center occupies a complex of beautiful historical buildings. Within its walls are hidden very interesting … Open

In the historical district of Lübeck, there is a very beautiful building – the Lion Pharmacy. It was built in the middle of the 13th century and was originally used as a private residence. In 1812, a pharmacy was opened in the historic building. One of the main features of this building is the preserved gothic pediment, adorned with the gilded figure of a lion. It is this architectural feature that gave an unusual … Open

Traditions and mentality of Lubeck

If you visit the city during the largest and most interesting holiday, you can get acquainted with the most fascinating historical traditions. Theater performances and reenactments dedicated to the most significant events in the history of Lübeck are held in squares. Local folklore bands, as well as well-known modern performers, take part in musical performances. A separate entertainment program is prepared for … Open