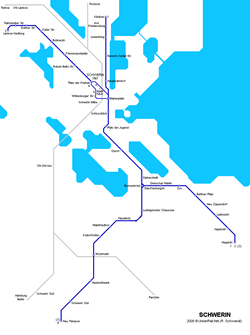 Interactive maps of hiking and biking routes around Schwerin

1. You can zoom in/out using your mouse wheel, as well as move the map of Schwerin with your mouse.
2. This interactive map presents two modes: 'Biking Routes' and 'Hiking Routes'. Use the '+' button on the map to switch between them.

This Schwerin map has two modes: 'Railway Network' and 'Landscape & Rural Map'. Use the '+' button on the map to navigate.

Our guide to Schwerin

Traditions and mentality of Schwerin

Schwerin is the amazing city with inexpressible atmosphere and interesting cultural traditions that locals cherish and hand down from generation to generation. Schwerin is often called the City of Seven Lakes; this fancy name describes one of its main distinctive features. The city is located in incredibly beautiful natural surroundings with seven scenic lakes, which are main natural attractions of the region. … Open

Another popular tourist attraction is Schweriner Fernsehturm or TV Tower. It was built in the 60s of the 20th century. Today, the tower attracts the guests with the highest observatory in the city. There is also a restaurant in the tower. It is located at a height of 100 m and is perfect not only for tasting culinary delights, but also for admiring the panorama of the city. In the center of Lake Schwerin, … Open

8. Not everyone knows that Schweriner Fernsehturm TV tower is a popular entertainment venue too. There is a popular restaurant and a large observation deck on its top floors. 7. Buses of bright red color stop next to all the important sights. A trip by comfortable double-decker bus will be a great attraction for those who don’t have a lot of free time. 6. Schwerin Ticket would be useful for fans of … Open

The picturesque German city has diverse dining places, among which there are fine dining restaurants and budget cafes, which has long been visited by tourists. The Schlosspark shopping complex is a real deposit of cute and cheap cafes; next to it you could find different restaurants. Those who can’t imagine rest without their favorite burgers are sure to visit McDonald's located in the building of the railway … Open

This quiet and cozy city will enchant travelers preferring to devote their time to strolls along scenic places. More than five hundred years it has remained the residence of Mecklenburg -Schwerin Dukes and the capital of the duchy of the same name. Historical monuments of different eras have preserved in Schwerin. Schweriner Schloss has been the permanent symbol of the city for more than a century and a half; it … Open

This architect is also the author of a truly interesting tower of the Cathedral (1889-1892), the height of which reaches 117 meters. Rich theatrical traditions of Schwerin make this city even more attractive. Outdoor opera performances, which are often held here in summer, are particularly impressive. A beautiful building of the theatre created in the late 19th century (Renaissance style) was built by the famous … Open