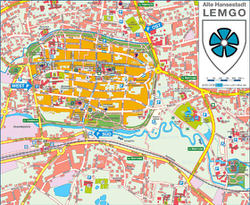 Interactive maps of hiking and biking routes around Lemgo

1. You can zoom in/out using your mouse wheel, as well as move the map of Lemgo with your mouse.
2. This interactive map presents two modes: 'Biking Routes' and 'Hiking Routes'. Use the '+' button on the map to switch between them.

This Lemgo map has two modes: 'Railway Network' and 'Landscape & Rural Map'. Use the '+' button on the map to navigate.

Our guide to Lemgo

In the warm season, Stadtforst Obernberg Wanderweg is a must-have route for fans of long hikes. It starts in the immediate vicinity of Lemgo and passes through the most beautiful natural places. The length of this route is several kilometers. A large part of it leads through forests where besides age-old trees and rare plants one can see rare animals and birds. The hiking trail covers very interesting geological … Open

A very original German restaurant is Stadtpalais located on the ground floor of one of the popular hotels. Authentic antique furniture and works of art were used for the restaurant's decoration. It was possible to recreate the sophisticated atmosphere of past centuries here. Gourmets come to this place to taste the best meat delicacies and fresh homemade pastries. Stadtpalais cooperates with local farms so its … Open

Traditions and mentality of Lemgo

Besides, Lemgo is a great vacation spot for those who do not like too noisy, touristy cities. This is the best destination to plunge into the atmosphere of the classic old town, many traditions and customs of which have remained unchanged for hundreds of years. Colorful fairs with aromas of the best regional products, beautiful historic festivals and vibrant music festivals make Lemgo's image special. Lemgo is … Open

In the historic town, there are many interesting buildings with centuries-old history. The Stadtpalais building was constructed in the 16th century. It housed a school of ballroom dancing, and now the historical building does not cease to amaze with its impressive scale and luxury of decoration. There is a building in the territory of a picturesque park, in which there is a pond and many paths for walking. The … Open

Lemgo for children - what to visit

North Rhine-Westphalia is rich in beautiful towns, and Lemgo is one of them. Here you can find entertainment for every possible taste. First of all, it is sightseeing (Junkerhaus, Schloss Brake, Postkreisel), visiting entertainment centers, and walks in local parks. Little travelers will like it here too - they'll surely appreciate the time spent in Lemgo offered by the parents. good parents, first and foremost, … Open

6. Lemgo has very few hotels and most of them are housed in unique historic buildings. Each one is unique, while the cost of accommodation in such hotels remains very attractive. 7. Traditional fairs, the best for buying food and souvenirs, are held in the squares every week. In the stalls, you can find rare delicacies that are not served in local restaurants. 8. Summer is the best time to go on a trip for … Open