Sightseeing in Strasbourg - what to see. Complete travel guide 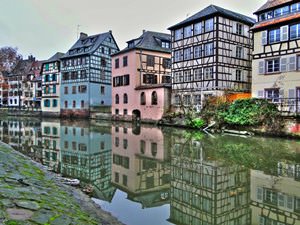 Since the city is located on the border of France and Germany, the influence of these two countries has equally affected its cultural background and lifestyle. Just make a walk in Strasbourg, and you will see typical German streets that border with houses built in best traditions of French architecture. Restaurants of Strasbourg offer to taste delicious German beer and best sorts of French wines. The local cuisine is also diverse and unique.
Excursion over cultural sights of Strasbourg - 'must visit' points of interest
For many years the Astronomical clock has been the symbol of Strasbourg; it is the unique landmark of the Renaissance. It was created in 1842 by the best Swiss craftsmen. The clock is …

Open
Strasbourg Cathedral, which is known far beyond the country, is, certainly, the main attraction of the city. This magnificent Gothic structure was built in the 7th century and for a long time this was the tallest building in Europe. Opposite to the cathedral is located another beautiful building - Rogan`s Palace, which halls hold the exhibition of the art museum. Here you can see the collection of items made by medieval craftsmen and admire rich decorations of the museum’s halls.
The old part of the city is home to numerous buildings of 16 - 17 centuries. Walk along these streets, and you will see many old houses with cozy patios. Nice souvenir stores and craft shops have been opened in the majority of buildings, so visitors will find here much interesting. Copyright www.orangesmile.com
Your active city break in Strasbourg. Attractions, recreation and entertainment - best places to spend your day and night here
Strasbourg is an excellent place for family vacation, as a variety of entertainment places is represented here literally at the every step. The Botanic Garden with its impressive size and …

Open
If you arrive to Strasbourg on Christmas Eve, you will simply not recognize the old quarters. All buildings are literally drowned in the colorful bazaars. The scents of sweets and mulled wine can be felt simply everywhere, the music does not stop until late at night, and the city is simply soaked in the unique atmosphere of the holiday. Don’t miss an excursion to the town of Kaysersberg as here are conducted most extensive Christmas festivities, concerts and theatrical performances. Your rest in this amazing city of contrasts will be truly fascinating and unique. 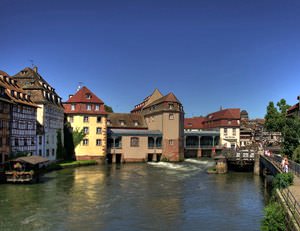 There is an incredibly romantic Little France in the city. Its entire territory is a UNESCO World Heritage Site. This picturesque historic area maintains wonderful half-timbered houses that were occupied in the 16th century by local craftsmen and fishermen. This area is loved by hikers. They often walk along the miniature embankment of the Il river, admire the historic buildings located on its shores and visit the restaurants and craft shops that occupy old buildings.
Advices to travellers: what you should know while being in Strasbourg
1. Travelers arriving to the airport of Strasbourg are recommended to get to the city center by express train. The tariff will be not more than 4 euros and the journey would take less than …

Open
The Church of St. Thomas is the largest Lutheran church in the city. According to historical data, the very first Christian chapel was built there in the 6th century. The church has remained practically unchanged from that time. Its facade is a vivid example of the Romanesque style. The strict facade uncovers a very impressive interior. The church keeps many unique artifacts and works of art. 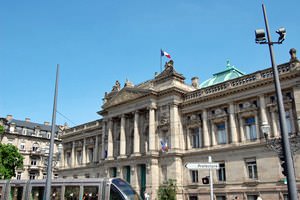 A beautiful church of St. Peter The Young was built in the 11th century. It is also a real gold mine of historical and artistic values. The church contains unique frescoes of the 14th century. Its hall is illuminated by huge chandeliers. Massive antique furniture made of dark wood is everywhere. The most exciting architectural landmark is the house of Kammertzel. It was built in the 15th century. After the last reconstruction, it acquired unique features of the Renaissance style. The main feature of the historic building is multiple windows with an exquisite figured frame. Miniature figures of various bible characters and mythical creatures are distinguishable on its facade. In total, the unusual building has 75 windows. However, not everyone can correctly recount them on the first try.
Top touristic routes around Strasbourg: architectural sightseeing and landmarks
Discovering the architecture of Strasbourg from bird's eye view! Eglise Saint Paul, Saint-Pierre-le-Jeune Church, Saint Thomas Church, Palace of Europe, Museum of Modern Art, Historical Museum of Strasbourg, all those monuments are defining the image of Strasbourg …

Open
The Historical Museum of Strasbourg is really worth visiting. It occupies a beautiful 16th-century building. Once, there used to locate a slaughterhouse. In 1920, it was restored and designed as a museum. Collections of old books and household items are its main values. Visitors can also see collections of ancient weapons and works of art. The museum houses a unique Bible made by I.Guttenberg on the very first printing press.

This guide to iconic landmarks and sights of Strasbourg is protected by the copyright law. You can re-publish this content with mandatory attribution: direct and active hyperlink to www.orangesmile.com.
Strasbourg - guide chapters 1 2 3 4 5 6 7

Shopping streets in Strasbourg
♥   Shopping area ' Grande Île' Strasbourg, 0.3 km from the center. On the map

Survived castles around Strasbourg
♥   Castle 'Château de Osthoffen' Bas-Rhin, 14 km from the center. On the map

National and city parks around Strasbourg
♥   Regional Nature Park 'Vosges du Nord' , 47.3 km from the center. On the map

Sights around Strasbourg from our guide 'Extreme places on Earth'

Distance from Strasbourg center - 62.7 km.
Colmar is often compared with Venice because of an abundance of channels. The city even has a scenic area called Little Venice that is one of the most visited tourist destinations. The main value of the town is a number of well-preserved medieval buildings, which makes it different from many other modern cities. The permanent symbols of Colmar are House of heads, the Church of St. Matthew, which was built in the 13th century, as well as the Dominican monastery, which is a unique monument of the 13th century. Colmar is a real open-air museum sharing its unique cultural and gastronomic traditions. … Read further

Distance from Strasbourg center - 60.3 km.
Place des Trois Eglises houses three major religious attractions at once. Those include the parish church of the 12th century, the church of Notre Dame, which was built in 1337, as well as St. Herard church, which in the 16th century city housed a school for boys. Old fortifications have survived in the city too. It's particularly amazing to walk along the courtyards of old mansions, where hundreds of years ago the wealthiest citizens used to live. … Read further 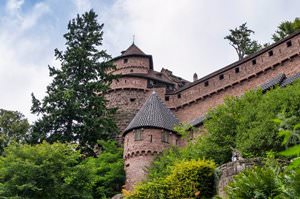 Distance from Strasbourg center - 47.4 km.
The castle was restored almost in full accordance with the original appearance thanks to the preserved plans and sketches. An interesting historical museum is open in the castle today. A lot of interesting entertainment awaits visitors here. They can participate in various historical events and festivals, as well as real medieval feasts. You can try the most popular dishes in the national style as part of such feasts. Costume performances and musical concerts are held at château du Haut-Koenigsbourg several times a year. … Read further 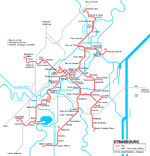 Search touristic sites on the map of Strasbourg

Sightseeing in regions nearby Strasbourg

Rust
It is worthy of note that, contrary to current laws, Rust remains an independent territorial entity despite the fact that the number of its inhabitants is less than 2,000 people (according to the current legislation, to be able to self-government, the population of an Austrian city must be at least 20,000 people). Over the hundreds of years, the city has been improving and ... Open »
Alsace
Ribeauville is full of charm; most travelers arrive there in September, when the Virgin Mary Festival is held. For several days the little town turns into a colorful carnival venue. There is music, actors and performances on the streets of the town. Rekvir amazes with natural beauty; it remains the same for the past several hundred years. Beautiful gardens decorated with ... Open »
Baden-Baden
The Lichtentaler Allee is one of the most famous sights of the city. Many tourists find a real pleasure in starting the new day with a walk among old trees and magnificent flowered beds. Many years ago such famous people as Tolstoy, Dostoevsky, Turgenev, Gogol and other walked on these valleys. Baden-Baden has traditionally been one of the most beloved places of rest among ... Open »
Freiburg im Breisgau
Nowadays only a part of Munster Cathedral reminds of past centuries. The construction of the cathedral started in the 12th century and lasted until the end of the 16th century. This is a strict gothic building made of red brick. The height of one of its towers estimates 116 feet. This tower is a symbol of the city. An observation platform has been organized in it. Here ... Open »
Karlsruhe
Karlsruhe Palace is one of the most notable sights in the city. This is a true miniature cope of Versailles Palace. Today the palace is used to hold the exhibition of Baden Museum; the palace is surrounded by a spacious park zone, so tourists usually mix the observation of exhibits with walks on picturesque parks. The park will guide you towards Botanic Garden. Once this place ... Open »
Saarbrucken
Start exploring the city from visiting St. Yohanner Markt square. Here you will find most popular cafes and restaurants; every morning thousands of local people gather on the square to enjoy a cup of morning coffee in one of the outdoor terraces. One of the main attractions of the city, Palace Schloss, is also located here. This magnificent building features a unique ... Open »

All about Strasbourg, France - sightseeings, attractions, touristic spots, architecture, history, culture and cuisine. Prepare your trip together with OrangeSmile.com - find out the 'must see' things in Strasbourg, which places to visit, which excursions to take, where the breathtaking views are waiting for you. Planning your trip with this travel guide will help your to get the most out of Strasbourg in few days.