Detailed hi-res maps of Dachau for download or print 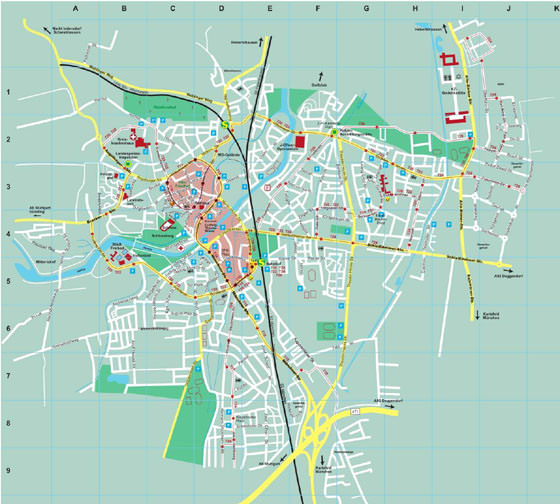 Search for services, infrastructure and sights on map of Dachau

Our guide chapters over Dachau

Eder stands out among coffee shops. It invariably offers a large selection of salads, snacks, fresh pastries, and other desserts, as well as soft drinks and aromatic coffee. Try fragrant Asian kebab and oriental sweets in Koto restaurant, which has long won recognition from locals and holidaymakers alike. The restaurant's hall is decorated in full accordance with national traditions, which makes this place even … Open

Traditions and mentality of Dachau

Dachau is often associated with the tragic events that occurred during the Second World War - the fact is that one of the so-called concentration camps was located in the city. The walls of the city still remember these terrible events - however, just like people who preserve the memory too, as it is impossible to forget this. However, this is not all that Dachau is famous for. So, it's worth to say a couple of words … Open

In just a few minutes, guests of Dachau can reach the nearby Altes Schloss. It was built in the 17th century according to Wilhelm V's order. Today, in the walls of the historic building there are several museums, including the original Museum of Nurseries. Some of the halls of the historic castle are used as exhibition galleries. In Dachau, there is an incredibly interesting museum of local lore, in which more … Open

5. Pedestrians should be especially careful not to confuse special bike lanes with sidewalks. Car enthusiasts should keep in mind that any violations of traffic rules are subject to heavy fines. 6. Before visiting foreign friends, be sure to stock up on small gifts for the hosts. Small souvenirs, good alcohol or flowers would be appropriate. Exchanging modest gifts with new friends is also appreciated, being … Open

When it comes to museums in Dachau, there are definitely worthwhile institutions here. KZ-Gedenkstätte is a tragic place where conflicting feelings arise - it's definitely worth a visit, if only because this monument of terror breathes history. Here, like nowhere else, one can feel a striking contrast between the quiet and calm city and the other side of Dachau. This is a kind of a different facet that is worth … Open

Festivals and events in Dachau

"It's never too late to start with a blank sheet of paper" - that's what organizers of the White Paper Festival think. This is the time of music, dance, colorful shows and performances, design, poetry, as well as a gastronomic program. The festival takes place in the middle of June in the territory of the woodworking plant Dachau Entwicklungsgesellschaft mbH. Every year, the organizers come up with something new to … Open