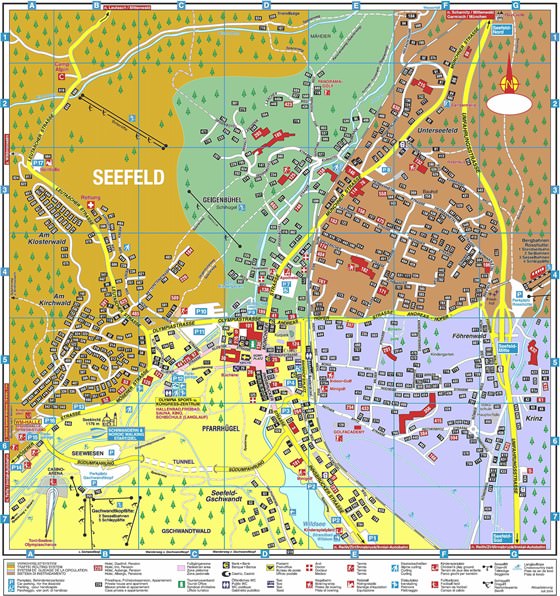 The actual dimensions of the Seefeld in Tirol map are 2860 X 3043 pixels, file size (in bytes) - 2468504. You can open this downloadable and printable map of Seefeld in Tirol by clicking on the map itself or via this link: Open the map.
Seefeld in Tirol - guide chapters 1 2 3 4

Large interactive map of Seefeld in Tirol with sights/services search

Search for services, infrastructure and sights on map of Seefeld in Tirol

Photogallery of Seefeld in Tirol sightseeing

Our guide chapters over Seefeld in Tirol

For many years, one of the most popular resort's hotels is Krumers Post, which is equally in demand among fans of active entertainment and wellness procedures. The hotel provides guests with spacious and bright Alpine-style rooms featuring incredibly beautiful paintings depicting mountain landscapes. Besides its huge Krumers Post Spa, travelers will be pleasantly surprised by lots of promotions and attractive … Open

Winterski in Seefeld in Tirol

Most of the "blue" trails run through the Rosshütte region, and their total length is about 20 kilometers. The area of Gschwandtkopf is perfect for beginners who have already mastered the basics of skiing. The resort offers a decent choice of "blue" and "green" slopes. The skiing zone of Geigenbühel would be ideal for travelers who are visiting the resort with children. Here, families can enjoy gentle slopes … Open

Travel guide to Seefeld in Tirol

Heiligkreuzkirche is considered the main historical symbol of the resort. It is located in an incredibly attractive place – on the lake shore. This church with its crisp white façade looks absolutely stunning among hills and mountains. In winter, water in the lake freezes and turns into a wonderful open-air skating rink. Seefeld is the motherland of famous writer Ludwig Ganghofer. Travelers can still attend the … Open

Cultural excursion through Seefeld in Tirol - things to see

No less interesting religious landmark is the Seekirchl Church (Zeekirhlyayn Church) - a beautiful Baroque-style monument. According to historical data, the construction of the miniature church began as early as 1629 by order of Leopold V and was finally completed only by 1666. The shrine was built specifically to hide an amazing relic within its walls - a miraculous cross, able to heal people from any disease. The … Open

Detailed maps of neighbouring cities to Seefeld in Tirol

Maps of Innsbruck
The first interesting festival of the year takes place at the beginning of February - the Snow Festival. This is the perfect time to plan and organize the Snow Festival, which gathers thousands of local people, national and international tourists on the Market Square. If you came here with children, there are a lot of platforms where they can try themselves in different ... Open »
Maps of Bolzano
Interesting concerts and performances have become an essential part of this event. Locals also like to organize Watten tournament – this card game is very popular in the area. Besides that, all wine cellars of Bolzano greet their guests and offer fine wine to them. That is why Speckfest Alto Adige attracts not only fans of meat delicacies but also connoisseurs of vintage ... Open »
Maps of Munich
During spring, all the tourists and residents enjoy the Munich Spring Festival or Munchener Fruhlingsfest. The Spring Festival lasts more than two weeks - from the end of April to the beginning of May. The entrance is free, you will have to fork out only for food, beverages, and some entertainment. In June, all the fans and connoisseurs of classical music will gather in Munich ... Open »
Maps of Dachau
A Bavarian beer festival is held not only in Munich - Dachau has its own small "Oktoberfest". It takes place in the middle of August on the central streets of the city. In addition, at this time you can try local beers, as well as take the opportunity to taste wines. And, of course, no beer festival can do without traditional beer snacks. It wouldn't be complete. Just like ... Open »
Maps of Augsburg
The Christmas market in Augsburg is one of the oldest in Germany, its history dates back to the 15th century. Initially, it was called the "Gingerbread Fair", since the main commodity here was the traditional holy biscuit. The main focus of the market - on food and sweets - has survived to this day. The capital of Swabia attracts hundreds of locals and tourists, who desire t ... Open »
OrangeSmile.com - online travel reservation expert providing reliable car rental and hotel booking services. We feature more than 25.000 destinations with 12.000 rental offices and 200.000 hotels worldwide.
Secure Server