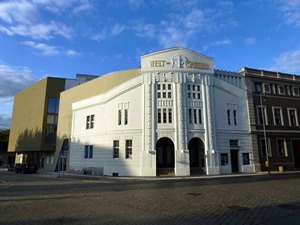 The main historical symbol of Cottbus is Branitzer Castle, which is considered to be a single attraction with the surrounding landscaped garden. Built in the 19th century for Prince Hermann Ludwig Heinrich von Pückler-Muskau, today this luxurious castle is the most spectacular baroque architectural monument in the city. The author of the castle project was the famous German architect G.Semper, among whose outstanding works is the Dresden Opera building.
Guide to Cottbus sightseeing - things to see and to visit
Cottbus is a city in the eastern part of Germany located on the Spree River and three railway lines 100 kilometers away from Berlin. The population of the city reached 110 thousands in 2010. …

Open
Today, the castle houses an interesting museum that keeps an extensive collection of historical artifacts. Many personal belongings of the prince have been preserved here, and his private art collection is of particular interest. The beautiful garden surrounding the castle was designed by the prince himself; it took more than forty years to create it. In the park, one can find several old gazebos and sculptures, as well as the tombs of the prince and his wife. One will need a lot of time to explore the vast area of the park covering 700 hectares.
Walking along the city streets, you can see many beautiful historic buildings. Gerberhäuser buildings are among the oldest in town. Built in the 17th century, both have survived to this day almost unchanged. The buildings can be found on the picturesque historic street Uferstraße, which is considered one of the most attractive for walking. Copyright www.orangesmile.com
Family holidays with kids in Cottbus. How to entertain your child, things to show to children.
Cottbus is a great place to go for a family vacation. Here you will find both attractions and museums that would be of interest to each family member (Branitz Palace and Park, the Cottbus …

Open
The city has also partially preserved medieval fortifications, The Spremberger tower is considered the most interesting medieval monument. It was once part of the medieval city wall surrounding the city. Over the years, the boundaries of Cottbus had expanded rapidly, so the fortress and its defensive walls soon lost their strategic importance. Now the old tower is one of the most noticeable architectural monuments of the historic district with an excellent viewing platform on its top. 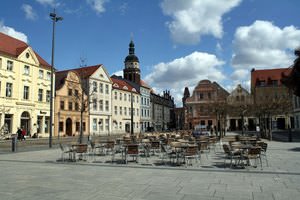 The city has a lot of interesting museums, and the richest art museum is the Kunstmuseum Dieselkraftwerk. It has gathered works by famous artists of East Germany, here you can see collections of sculptures and paintings made in various styles and techniques. In total, the museum displays more than 30,000 exhibits and regularly holds temporary exhibitions. The earliest works presented in the museum are dated by the late 19th century. In addition to paintings and sculptures, it also contains an interesting collection of old photographs.
Cuisine of Cottbus for gourmet with top restaurants and cafe
Traditional Cottbus cuisine has a lot of interesting features, and unlike many other German cities, potato dishes are much less common here. Locals consider Spreewälder Gurken pickles to be …

Open
In the Stadtmuseum, one can find out about the most interesting events Cottbus has ever seen. The historical museum's collection includes old documents and household items of local residents. It has gathered archaeological exhibits discovered by researchers within the city and around it, and a collection of artworks is of great interest. 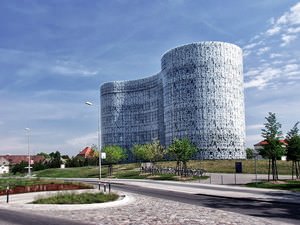 The Wendisches Museum is located on one of the historic streets of the city. It is relatively small but the collection of exhibits it stores is unique and very valuable. This museum is dedicated to the culture and traditions of the region's population. It contains beautiful national costumes of various periods, household items that local people used hundreds of years ago, as well as interesting handicrafts. A tour of this museum can help visitors learn a lot about the local traditions and its bearers.
Authentic traditions, festivals and lifestyle of Cottbus inhabitants
Cottbus is quite a small city characterized by its special rhythm of life. The situation here is strikingly different from the one prevailing in large German cities, locals even use a …

Open
A very valuable cultural symbol for the locals is the Staatstheater Cottbus. It would be of great interest even to those who have never been enthusiastic about theatrical art. Apart from operettas and musicals, musical concerts are often held in the theater. The history of the theater begins in 1905 when the city authorities decided to build a large cultural center on the site of the old market. The theater got a splendid building, the cost of which at the beginning of the 20th century exceeded one million marks. 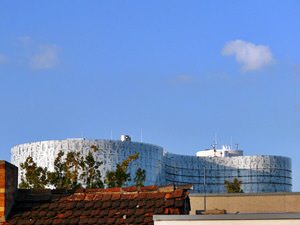 The official opening took place in 1908, and now it is not just the largest cultural center in Cottbus but also an outstanding architectural monument. The theater's building is made in the best traditions of Art Nouveau style, its well-preserved interior is of great historical value. The most beautiful breeds of marbles were used for its decoration. Also, an interesting collection of sculptures is stored in the theater.
Your active city break in Cottbus. Attractions, recreation and entertainment - best places to spend your day and night here
Although Cottbus cannot boast the great variety of noisy entertainment centers, it offers excellent opportunities for enjoying sports and outdoor activities. An interesting symbol of the …

Open
An old pharmacy building is presently occupied by the interesting themed museum Brandenburgisches Apothekenmuseum dedicated to the history of pharmaceutics. The very first pharmacy was opened in this building in the second half of the 16th century and closed after more than 200 years. The thematic museum was established in the preserved historic building in 1980. Now it keeps a collection of old pharmacy tools, historical documents, as well as old pharmaceutical products that were made here hundreds of years ago.

In the section below, you can get one of our excursion, activities or city discovery tours over Cottbus and surroundings. Our website offers 10-30% lower ticket prices, when compared to the offline purchase on the spot.

This guide to cultural sights Cottbus is protected by the copyright law. You can re-publish this content with mandatory attribution: direct and active hyperlink to www.orangesmile.com.
Cottbus - guide chapters 1 2 3 4 5 6 7
Car rental on OrangeSmile.com 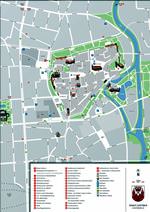 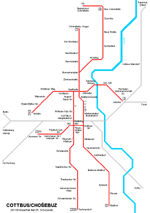 Photogallery of cultural heritage of Cottbus

Excursions over cultural sights of neighbours of Cottbus

Dresden
Neustadt area is the most attractive one from historical point of view. On the territory of this area are located numerous beautiful old buildings. Japanese Palace is a striking architectural landmark of the city. The palace was built in the beginning of the 18th century. Currently the palace hosts two museums, one of which introduces visitors to the Saxon national culture, and ... Open »
Berlin
Each district of Berlin is full of different monuments and sights, each of which is unique and may be very interesting to curious travelers. The eastern part of the city is the location of the so-called Museum Island (Museumsinsel). This place has always been a magnet for fans of art for many years. There is a large variety of museums on the island. The most famous are Pergamon ... Open »
Liberec
The castle was built to protect the town in the 16th century. Over time, the territory of Liberec expanded rapidly, so the castle turned out to be surrounded by new streets on all sides. The building's main characteristic is that it was built of brick, which was completely untypical of local architecture of the 16th century. Now the historical monument stands out for its ... Open »
Leipzig
As for the cultural institutions, the undisputed leader in the number of visits remains the Antique Museum. Priceless artifacts stored within its walls belong to the era of ancient Greece and Rome. Fans of art will be interested in visiting the Museum of Art. Its collection consists of paintings of the 15th century; the museum also has an interesting collection of sculptures ... Open »
Dessau
Parkanlage Worlitz is widely known as a sight of international importance. The creation of the park started yet in the beginning of the 18th century. The park is designed in the classic English style and is considered one of the most beautiful parks in the world. The territory of the park is the location of an ancient palace which is widely known as the first architectural ... Open »
Prague
Prague is home to numerous beautiful historic buildings, cathedrals and parks. Excursions to Cathedral of St. Vitus are very popular among travellers. The construction of the cathedral started in the middle of the 14th century. The relics of St. Vitus, which were brought to the church in 1355, are considered the main symbol of the church. The sanctuary is also a popular place ... Open »

Culture guide to Cottbus. Which fascinating sights to visit once you are in Cottbus: temples, churches, museums, theaters and castles. Recommendations (with addresses, phone numbers and links) on the places 'must visit' in Cottbus. Plan your own city excursion by using this page info!