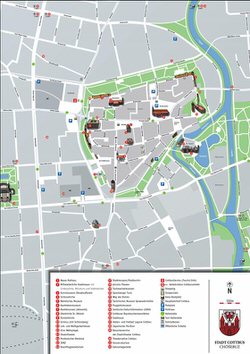 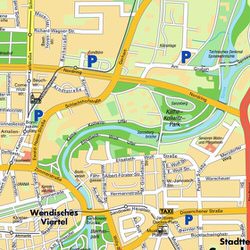 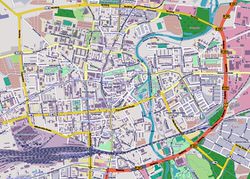 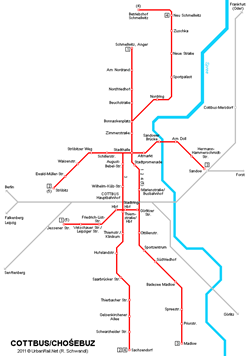 Interactive maps of hiking and biking routes around Cottbus

1. You can zoom in/out using your mouse wheel, as well as move the map of Cottbus with your mouse.
2. This interactive map presents two modes: 'Biking Routes' and 'Hiking Routes'. Use the '+' button on the map to switch between them.

This Cottbus map has two modes: 'Railway Network' and 'Landscape & Rural Map'. Use the '+' button on the map to navigate.

Our guide to Cottbus

One of the most beautiful parks in town is Spreeauenpark. Here one can walk for hours, admiring rare species of trees and ornamental plants. Flower beds always adorn the park in the summer. This park is very quiet and peaceful, mostly visited by locals. Here they enjoy many convenient walking paths and special paths for cycling. In warm weather, be sure to make an excursion to one of the local lakes. In the … Open

Traditional Cottbus cuisine has a lot of interesting features, and unlike many other German cities, potato dishes are much less common here. Locals consider Spreewälder Gurken pickles to be their main gastronomic symbol, which is the most common snack and a must-have addition to many dishes. Traditions of cooking potatoes are also special, they are usually boiled in their skins and served with cottage cheese, … Open

Traditions and mentality of Cottbus

The tiny German town is known to many for its festivals and holidays. For years, Cottbus has been a permanent venue for the East European Film Festival, which is considered one of the most prestigious in the world. Famous film directors, actors, and producers visit Cottbus every year since 1991 when it was held for the first time. This large-scale festival is equally attractive for tourists, as its program covers … Open

An intriguing site is the factory Enke-Fabrik. It was built in the late 19th century and occupies a huge area of ​​about 8,000 square meters. Once upon a time, this factory produced books and other printed products. By the middle of the 20th century however, the huge plant came to desolation. Now the main visitors of the plant are lovers of walk through abandoned places. Here, huge dilapidated buildings, whose … Open

Cottbus for children - what to visit

Flugplatzmuseum Cottbus will certainly please every child, regardless of sex (although boys still love this theme more). A large collection of wonderful military aircraft models is on display here. All comers are invited to get acquainted with the military history of the city. Spreeauenpark is another good place to take children to. The park has its special charm, which can not be compared with any other. One more … Open

6. Perfect cleanliness is maintained in the city; special garbage bins are installed here at every step. Any violations in this regard are punishable by heavy fines. 7. Locals are known for their careful attitude to nature. All local parks and reserves are protected, equipped with special areas for walks and outdoor activities. 8. Cottbus is a typical student town so students have a lot of privileges. All … Open