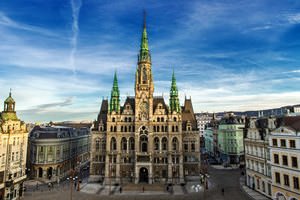 The main historical symbol of Liberec is the old Town Hall, a striking Renaissance-style architectural monument. Its construction took place at the end of the 19th century, the main architect was Franz Neumann. In the second half of the 19th century, Liberec had the status of a major industrial center, so the new Town Hall was to become the embodiment of its wealth and prosperity. The spectacular Town Hall building, which looks more like a palace, continues to be used for its original purpose to this day. The main feature of the building is the tower, which rises to the height of 65 meters, a statue of a knight is installed on its top.
Guide to Liberec sightseeing - things to see and to visit
Liberec is a capital of the Northern Czech. The town was founded in XIII century on the basis of an old fortress built in the region of ford of Garkovitsky flow. Steadily the settlement grew …

Open
In the vicinity of the city, you can find the ancient Bezděz Castle, which is a vivid example of Gothic architecture. The castle's construction was carried out in the second half of the 13th century. It became one of the most important defensive centers for the region. By the 17th century, it has survived many battles but remained intact. The building suffered the most during the Thirty Years War when the Swedish troops have managed to capture the castle for the first time in its history.
In the 17th century, a monastery was founded in the castle and some important relics were brought here. Bezděz became a pilgrimage center, every year it was visited by over 40,000 people. In 1932, the castle became a property of Karl Wallenstein, a descendant of one of the fortress' last owners. A large-scale reconstruction that has begun under his guidance is still ongoing. The fortress stands on a hilltop so during the tour travelers will have the opportunity to check some excellent viewpoints. Copyright www.orangesmile.com
Family holidays with kids in Liberec. How to entertain your child, things to show to children.
Liberec is a wonderful city for families with children. Many of its sights are ideal for a family visit. In the city, there is an inventive scientific and entertainment center iQLANDIA. A …

Open
Guests of Liberec will also have a chance to visit Frýdlant Castle dating back to the same 13th century. It was built to protect nearby villages and towns from robbers and thieves. At the beginning of the 17th century, the prominent commander Albrecht von Wallenstein became the owner of the fortress. Despite the numerous battles the castle has survived, it has been perfectly preserved and converted into a museum. It keeps rich collections of old antique furniture, works of art, weapons, as well as books and craft works. A significant part of the museum exhibits belongs to the 16th-17th centuries. 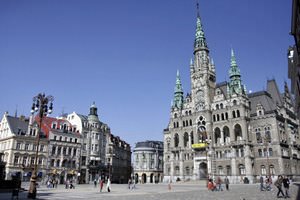 Many other interesting architectural monuments have been preserved within the city, including Valdstejnske domky. These houses were built in the late 17th century, there were a lot of similar houses at that time in the city. They are distinguished by very beautiful facade decoration made of wood. Only a few unique architectural monuments have survived to this day. An interesting monument of the late 19th century is Villa of Theodor Liebieg, which once belonged to one of the wealthy local industrialists. Studies have shown that the beautiful villa was erected on the site of early medieval buildings. Now the villa is surrounded by a vast garden. Since the completion of its construction, the estate has not undergone a single major reconstruction and retained its unique romantic style.
Cuisine of Liberec for gourmet with top restaurants and cafe
Liberec is the perfect place to explore traditional Czech cuisine. This city has many attractive restaurants offering not only a rich regional menu but also a special authentic atmosphere. …

Open
Another monument of the late 19th century is Johan Liebig Palace built in the best traditions of classicism. The best time to visit the castle is the summer, as it is framed by a picturesque landscaped garden. On one of the main historic streets, you can see Liberecky Zamek, one of the oldest buildings that have managed to survive in the city. 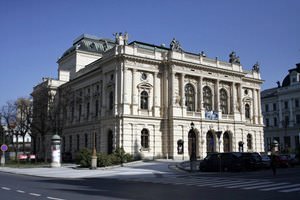 The castle was built to protect the town in the 16th century. Over time, the territory of Liberec expanded rapidly, so the castle turned out to be surrounded by new streets on all sides. The building's main characteristic is that it was built of brick, which was completely untypical of local architecture of the 16th century. Now the historical monument stands out for its bright red-and-white facade and many architectural elements dating back hundreds of years. The historic castle is closed to visitors so guests of the city can only admire it from the outside.
Authentic traditions, festivals and lifestyle of Liberec inhabitants
Liberec is the perfect place to explore the traditions and lifestyle of local population. Local residents are distinguished by an interesting character, a special attitude to their culture …

Open
The main religious monument of Liberec is the Church of St. Anthony the Great founded in the 16th century. The church has always been the tallest building in the historical district with a 70-meter-high tower. The shrine is remarkable for its rich interior decoration and many unique religious artifacts. The main treasure of the church is an old organ, the sound of which would fascinate even those who have never been interested in organ music before.

In the section below, you can get one of our excursion, activities or city discovery tours over Liberec and surroundings. Our website offers 10-30% lower ticket prices, when compared to the offline purchase on the spot.

This guide to cultural sights Liberec is protected by the copyright law. You can re-publish this content with mandatory attribution: direct and active hyperlink to www.orangesmile.com.
Liberec - guide chapters 1 2 3 4 5 6 7 8
Reference information
Map of all palaces

Public palaces near Liberec
♥   Palace 'Troja Palace' , 85.5 km from the center. On the map

Cathedrals and basilicas near Liberec
♥   Bazilika Panny Marie Pomocnice křesťanů, Jiříkov, 40.7 km from the center. On the map

Photogallery of cultural heritage of Liberec

Excursions over cultural sights of neighbours of Liberec

Prague
Continue your observation of the city and its architectural landmarks by visiting Belvedere Palace. The palace is the most beautiful building in the city and a gorgeous example of the Renaissance style. The construction of the palace took place by order of King Ferdinand; the building is distinguished not only by fantastic design of the facade, but also by luxurious interior ... Open »
Cottbus
An old pharmacy building is presently occupied by the interesting themed museum Brandenburgisches Apothekenmuseum dedicated to the history of pharmaceutics. The very first pharmacy was opened in this building in the second half of the 16th century and closed after more than 200 years. The thematic museum was established in the preserved historic building in 1980. Now it keeps ... Open »
Wroclaw
St. Elizabeth is definitely among other religious sights recommended for visiting. The height of the church’s bell tower reaches 90 meters. Tourists should definitely come inside in order to see the design of the interior premises. Visitors are also welcome to climb up the spiral staircase to the top of the bell tower. The top of the tower is equipped with an observation ... Open »
Karlovy Vary
Excursions to Moser glass factory are also very popular with tourists. The factory was founded in 1875, but it is still operating. A part of old buildings of the plant was converted to a museum, where visitors will see collections of historical documents and ancient masterpieces by local artists. Visitors are also offered to walk through shops of the plant and see how ... Open »
Plzen
There is an establishment not far away, which can be the best entertainment for lovers of pointed feelings – Ghost Museum. City’s Art Gallery is very popular among admirers of art, collection of great Czech artists’ works is kept there; also it is the place where original exhibitions usually go off. The gallery Jiří Trnka invites visitors to continue the acquaintance ... Open »
Leipzig
As for the cultural institutions, the undisputed leader in the number of visits remains the Antique Museum. Priceless artifacts stored within its walls belong to the era of ancient Greece and Rome. Fans of art will be interested in visiting the Museum of Art. Its collection consists of paintings of the 15th century; the museum also has an interesting collection of sculptures ... Open »

Culture guide to Liberec. Which fascinating sights to visit once you are in Liberec: temples, churches, museums, theaters and castles. Recommendations (with addresses, phone numbers and links) on the places 'must visit' in Liberec. Plan your own city excursion by using this page info!