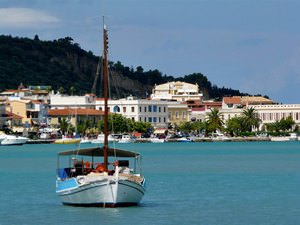 Zakynthos was inhabited in antiquity, and despite a serious earthquake that destroyed part of the island buildings in the 1950s, there are many beautiful monuments of ancient days. The capital, for example, has so far retained many Venetian style mansions, with galleries, loggias, and ocher-colored walls. Walking through the streets of Zakynthos, you can look into the monastery of St. Dionysius, built in the 16th century and preserved to this day almost unchanged. The relics of the patron saint of the island remains here, and the local residents are sure that every night Dionysius bypasses the island.
Family holidays with kids in Zakynthos Island. How to entertain your child, things to show to children.
Zakynthos is just great for a vacation with children. There are many beautiful beaches with a gentle descent, and unusual natural objects, historical monuments, and attractions for children …

Open
There is a monument to Dionysius Solas on the main square of the city, Platija Solomu, and another ancient religious building, the church of St. Nicholas. There is also the Byzantine Museum, which collection includes many exhibits that exhaustively illustrate the entire history of church painting from ancient times to the end of the 19th century. The exposition presents the works of Damaskin, Doxaras, Zanes, Kutuzis, Kallergis. A large collection of Hellenistic and Byzantine sculptures and statues is also interesting.
On St. Mark's Square you can see not only the cathedral of the same name but also a museum dedicated to the poet D. Solomonos and several other equally prominent inhabitants of the island. On Filikon Street you will find St. George's Church, known not only as an architectural monument but also as an important object in the history of the formation of independent Greece. This was the place, where the members of the secret circle "Filiki Eteria", who stood for the liberation uprising in 1821, swore their allegiance. Copyright www.orangesmile.com
Cuisine of Zakynthos Island for gourmet with top restaurants and cafe
The island's cuisine absorbed all the best traditions of the Greek culinary. One of the most important ingredients in almost any dish is olive oil. The Islanders also like to use tomatoes, …

Open
If you climb the hill of Bohali, rising above the capital, you can get to the Venetian fortress. By the way, it was built on the ruins of an older, ancient structure, the ancient Greek acropolis of Psofis. Unfortunately, the Venetians destroyed the old building almost completely. The construction of the fortress began in the 12th century, and the last construction works here ended only in 1646. The structure impresses not only with its size but also with the perfect and practical brevity of features. For a long time, there was an active central point of defense of the island from pirates, it is impossible not to feel the military purpose of these walls. It is worthwhile to climb here not only for the sake of touching history but also for the magnificent view that opens onto the capital and port. 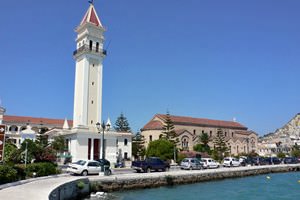 Those, who like the sea, should visit the Milanio Maritime Museum in the resort village of Tsilivi, which exposition tells about 4 thousand years of the history of Greek navigation. You can learn about the life and customs of local farmers in the agricultural museum of Vertzagio, which is located in the village of Pigadakia in the rural community of Alykes. Here you can learn about the traditional life of the Zakynthian settlement. The exposition presents home utensils, furniture, products of local masters. Some artifacts are already over 400 years old. To get acquainted with the natural world of the island you can visit the museum of natural history of Helmis in the village of Agia Marina – almost five hundred exhibits will tell you about the features of the flora, fauna, and soil of the island.
Authentic traditions, festivals and lifestyle of Zakynthos Island inhabitants
When you are talking to the local residents, remember that not all gestures here have a traditional meaning. For example, the palm that is spread out and directed right at the interlocutor …

Open
The Church of the Virgin Anafonitria, which can be found in the mountains near the island's capital, is known for its mystical history of origin. According to the legend, the church and the monastery were built on the place where a local resident found an icon from which the light came in waves. It was back in the 15th century. On Stamfanio, an island near Zakynthos, you can find the monastery of Metamorfosi Sotiros, which was built here in the 13th century and partially reconstructed in the 20th century after the earthquake. The ancient Mycenaean burials at Campi are much older. Their age has passed over 4 thousand years. The artifacts, which were found here, to this day attract the attention of prominent scientists, and the graves themselves are located above the caves of the sea, whose origin is unknown.

This guide to cultural sights Zakynthos Island is protected by the copyright law. You can re-publish this content with mandatory attribution: direct and active hyperlink to www.orangesmile.com.
Zakynthos Island - guide chapters 1 2 3 4 5 6 7 8 9

Unique spots in Zakynthos Island and near 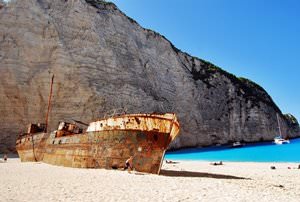 Distance from Zakynthos Island center - 18.6 km.
Panagiotis Wrecks is a shipwreck on the coast of Zakynthos in a picturesque Navagio Bay, Greece. This abandoned ship turned a lovely almost secluded isolated bay with a sandy beach into a real world sightseeing. The vessel has a very interesting history. For a long period of time, it was used for contraband shipments. People call the Bay with the wrecked ship "The Bay of Contrabandists". … Read further

Distance from Zakynthos Island center - 54.7 km.
In Greece on the island of Kefalonia is a unique Melissani cave, one of the most romantic and beautiful in the world. In the cave is a lake of the same name, the main feature of the cave is a huge hole in the ceiling through which bright daylight penetrates the underground world. A beautiful legend about the nymph Melissini is connected with the cave and the lake. The nymph was secretly in love with the god Pan. And when he rejected her love, she lost the meaning of life and drowned in the cave lake. … Read further

Excursions over cultural sights of neighbours of Zakynthos Island

Zakynthos
St. Mark’s Square is located right at the foot of the hill. There are also several attractive sights not far from it. Don’t forget to attend the Church of St. George. Yet at the beginning of the 19th century, the church was regularly hosting important divine services and religious events. Solomos & Kalvos Museum, which is named after two great poets, is located nearby. ... Open »
Kefallonia
Kipouria Monastery is the place where visitors can not only walk in a historic area and see the building from the inside, but also admire the beautiful panoramic view. The holy place has a very unusual location – right on the top of a high cliff. If you climb here, you will see the whole island under your feet. Another important religious landmark is located in the town of ... Open »
Ithaka Island
Kathara Monastery is the largest on the island. It stands 600 meters above the sea. It is hard to reach the monastery, especially when it’s hot, but you will be happy to see the interior of the monastery with its cult objects and the icon of the Virgin, the patron and the protector of the island. Kioni is a small village built on the slopes of a mountain which survived ... Open »
Lefkada
The main attraction of Athani is ruined Apollo temple. Many interesting legends are associated with this picturesque old town; the only prehistoric monument here is the aforementioned temple. There are lots of existing archaeological regions on the island, including the town of Athani. Findings of scientists are gathered at the Archaeological Museum, its collection includes ... Open »
Kalamata
The central Vassileos Georgiou (King George) square is a must-visit destination that tourists should definitely not neglect. First of all, it is the right place to feel the magic atmosphere of the city. There are also many old buildings nearby, so it is a great destination for all fans of architectural landmarks. The city’s cathedral is, perhaps, the most grandiose landmark ... Open »
Loutraki
In the vicinity of the city, there are many interesting Christian attractions. On the top of the Gerania Ridge Mountain is the ancient monastery Moni Osiou Patapiou. To climb to it, one will need to overcome a steep stairway of 144 steps. The history of the foundation of this monastery is pretty interesting. In the 13th century, a young hermit named Potapius settled in one of ... Open »