Family trip to Zakynthos Island with children. Ideas on where to go with your child 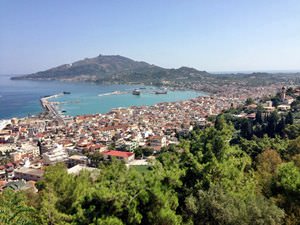 Zakynthos is just great for a vacation with children. There are many beautiful beaches with a gentle descent, and unusual natural objects, historical monuments, and attractions for children of any age. Be sure to visit the water park Water Village located in the village of Sarakinado, just 4 kilometers from the island's capital. There are slides not only for children but also for adults, so neither your child nor you will be bored. If you get tired of skating and swimming, you can always relax and sunbathe on the deck chairs, without leaving the park. Moreover, the child here can jump on a trampoline or ride a mini car. If you want, you can also visit the Splash FunTsilivi Waterpark – it is a bit smaller in size, but there are plenty of water attractions.
Guide to Zakynthos Island sightseeing - things to see and to visit
Zakynthos is the well-known resort island that is a part of Ionian Islands. Lots of legends are associated with the island. According to the one of them, islanders were brave warriors and …

Open
The second object, obligatory for a visit with a child in Zakynthos, is the zoological park of Ascos. Askos is divided into three parts. One is occupied by the national park, the second is dedicated to archaeological excavations, and the third is reserved for the zoo. Here you can see the traditional stone and wooden rural buildings – stables, water cisterns, and houses. On the territory of the zoo, you can not only admire the multitude of animals living in spacious enclosures but also feed them. It is not forbidden here, the main thing is to find out in advance what exactly this or that species eats.
Young naturalists will also like the territory of the National Marine Park. It is located in the south of the island and is entirely devoted to turtles. In the coastal areas of the park, these aquatic animals lay eggs and breed baby turtles and live in large numbers in the marine area. You can see sea turtles it is possible with own eyes if you go for an excursion on a boat with a transparent bottom. By the way, except for the turtles, your child will have a chance to meet the Mediterranean seal Monachus monachus, which is now considered to be dying out. Young naturalists will also be interested in visiting the museum dedicated to turtles Caretta-Caretta. Copyright www.orangesmile.com
Cuisine of Zakynthos Island for gourmet with top restaurants and cafe
The island's cuisine absorbed all the best traditions of the Greek culinary. One of the most important ingredients in almost any dish is olive oil. The Islanders also like to use tomatoes, …

Open
Your child will probably enjoy an excursion to the Blue Caves. You can get there only by boat, and the whole view brings thoughts about pirates and adventures. Thanks to the excellent visibility, there are almost ideal conditions for snorkeling. However, your child can dive with a mask and tube almost on any beach of the island. If your child is fond of diving, then he will like several good dive sites in the water area of ​​the island. With younger children, you can go on a sea voyage around Zakynthos or try sea fishing. 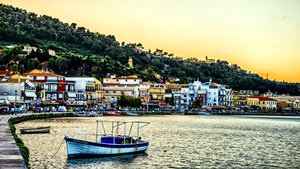 Climb to the Bohali hill with your child not only for the magnificent view that opens from there to the capital of the island. There is the Venetian fortress, whose foundation was laid in the 12th century. Recent changes in the construction were made in the 17th century, but before and after that the fortress served as the main point of the island's defense. It will be interesting for children of any age – schoolchildren will be able to see firsthand what was said at the history lessons, and young children will certainly give room to their imagination and move to the world of dragons, knights, castles, and princesses.
Authentic traditions, festivals and lifestyle of Zakynthos Island inhabitants
When you are talking to the local residents, remember that not all gestures here have a traditional meaning. For example, the palm that is spread out and directed right at the interlocutor …

Open
You can go with the child to Strofades, small islands near Zakynthos. In the 13th century, a monastery was constructed here, partially destroyed after the earthquake of the late 20th century and rebuilt in our time. You can find not only the old building on the islands but also a lot of migratory birds that have chosen the local trees for their haven. It was here, according to the Greek legends, where the hero of the Trojan War, Aeneas, found Gaius. The child will certainly be pleased to be able to visit the place, where myths and reality bind together.

This guide to family holidays in Zakynthos Island is protected by the copyright law. You can re-publish this content with mandatory attribution: direct and active hyperlink to www.orangesmile.com.
Zakynthos Island - guide chapters 1 2 3 4 5 6 7 8 9

You can look into Aqua Land water park on Corfu. There are dozens of various slides, several swimming pools and an outdoor jacuzzi. Adults like the kamikaze coaster, which is one of the most extreme rides in Greece. A large number of tropical plants grow in the park, so it literally drowns in the picturesque greenery. There is another large water park, WaterLand, in Thessaloniki. There are numerous water slides and rides. Guests can go through an artificial storm in one of the pools, or sit a restaurant or bar. There is also a basketball court, courts for tennis, and a football field. Events with famous Greek performers and thematic performances for children and adults are frequently held there. … Open

Interesting places to visit with children around Zakynthos Island

Zakynthos
Another great place where it will be interesting to look at with children is the equestrian center Lucky Luke Horse Riding. Here, interesting horse riding are organized for visitors. For guests with children and those who are just starting to learn the basics of riding, interesting excursions are conducted and they are taught how to handle horses. Children in this center will ... Open »
Kefallonia
A pleasant surprise also awaits nature enthusiasts and hikers in Kefalonia. The island has a huge number of parks and nature reserves. One of the most attention-grabbing hiking trails is The Cypress Trail, which originates in Fisardo. It passes through an incredibly beautiful mountainous area, through centuries-old forests. For a walk tour here, it is worth going with ... Open »
Ithaka Island
You can also take your child to the Fountain of Arethusa. A swineherd Evmey lived here. He sheltered Oddyseus when he wanted to live on his island and remain unknown. Be sure to show to your child Stavros, one more ancient city in Ithaka. The road to it runs through incredibly picturesque places, so young photographers will be happy to capture amazing views. Stavros can also ... Open »
Lefkada
As for museums, the Folklore Museum located in Karya is of special interest to children. This is a kind of attempt to recreate the traditions that reigned on the island some time ago - here you can see how ordinary people lived on the island for several centuries. The pastoral atmosphere prevailing here is more relaxing than ever. It's also worth mentioning several more ... Open »
Loutraki
But the most popular tourist spot among both families and those traveling alone is Loutraki Beach - a fabulous place where everyone can have a fabulous time. Although the beach is relatively small and narrow, it is very popular among tourists and local residents. Entertainments available here suit every taste - if you wish, you can soak up the Greek sun, swim in the waters of ... Open »
Spetses Island
However, children of all ages will be happy to visit Boubolina’s Museum. It is located in a beautiful mansion built in the 17th century, which is an architectural attraction. The collection of the museum includes coins, weapons, books and personal effects of Laskarina. The interior of some rooms hasn’t changed from the 19th century. It shows how Greeks lived a couple of ... Open »

Guide to sightseeing and entertainment for children in Zakynthos Island - parks, attractions, museums, zoos, water-parks. All fascinating and educational sites of Zakynthos Island, which are must visit and see for your child. Find out the best discovery routes and places for kids (local theaters, exhibitions and museums), where you can spend quality time together. Zakynthos Island for families with children.