Sightseeing in Molyvos - what to see. Complete travel guide 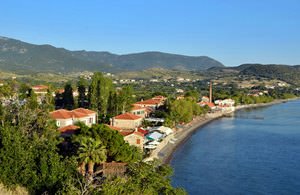 On the northern coast of Lesbos Island, which is a part of Greece, lies a small town called Mithymna. In modern days, this settlement is widely recognized as the most beautiful on the island. Mithymna is a fantastically picturesque place even when compared to other cities of Greece. Tourists always mention it as an enchanting region where epic architectural landmarks of different periods peacefully co-exist together. The town is a charming place that also attracts tourists with its narrow cobbled streets decorated with Turkish fountains and houses with red-tiled roofs that go up to the hill until the oldest fortress of the region.
There were several archaeological excavations in this area that lasted decades. Thanks to them, scientists proved that there was a small settlement on the site of modern Mithymna long before our age. However, archaeologists haven’t found any documents or evidence that would prove the exact age of that settlement. We only know that during the archaic age Mithymna was a large town that had many trading connections with other towns of the antique period. According to a legend, Mithymna got its name because of an order of the King of Lesbos, Macar, who wanted to immortalize his daughter this way.
The first stronghold was built in the territory of modern Mithymna during the Byzantine reign. Builders chose a spectacular area for the fortress – a hill with an enchanting view of the coast and the sea. This strategic location helped to protect the coast from the rapid attacks of the enemies. The majority of Mithymna’s residents initially settled inside the fortress. Only several centuries later, when the territory inside the fortress complex was full and couldn’t have any new dwellers, people started settling nearby. The new buildings were made in a peculiar way so that they could stand on the slope of the hill for a long time. Copyright www.orangesmile.com
For many years, Mithymna was widely recognized as the main Greek resort on Lesbos Island. However, the town has lost its popularity in recent years. The local beach doesn’t amuse tourists either. In the opinion of many, the beach is mediocre. It is covered with pebbles and has a sand surface only close to the Psiriara Bay. Of course, tourists can sunbathe and swim in the sea but the beach has no infrastructure. Silence and distance from urban noise are the main advantages of Mithymna Beach. If you are searching for a comfortable area for beach recreation, it is better to visit other nearby settlements that have more tourist infrastructure. 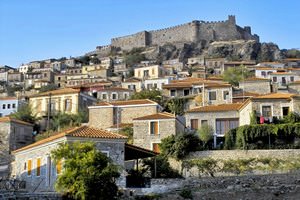 What beaches are the best in the region? Approximately five kilometers from Mithymna, there is Petra Beach that is a lot more suitable for pleasant beachside recreation. This beach is a good choice for groups of friends and families. Petra Beach has everything needed for a comfortable stay. Visitors can always rent sun loungers and umbrellas to make their stay here even more pleasant. The sea is shallow near the coast, and the bottom is free of sharp objects, so holidaymakers with children will find it enjoyable to spend their free time at Petra Beach. The sea becomes deeper steadily, so both adults and children can easily find a comfortable and safe swimming area. Do you enjoy exploring the underwater world? This beach has a modern diving center with a rental office that has everything needed for this popular activity.
Besides sea recreation, foreign tourists can make an interesting journey and visit the Byzantine fortress that is perfectly visible as soon as you enter the town. It has been in good condition since ancient times and still greets thousands of visitors every year. When taking a stroll inside the fortress, take a look at the size of the stones which were used to build this gorgeous stronghold. These are not some regular materials but large cobblestone boulders that keep the historical part of the city. One of the walls still keeps an iron cannonball that got stuck inside the wall during an enemy attack in the Byzantine period. 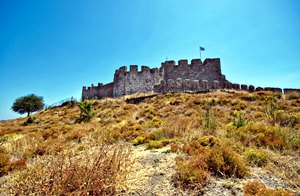 Get to the top of the building to see a spectacular view and enjoy the look of the sea and the town at your feet. This is the best place to take panoramic pictures of Mithymna. From here, you can admire numerous yachts docked near the coast, see how locals walk in the narrow cobbled streets and how guests of the town get stunned by the beauty of Turkish fountains. Do you like romantic places? In this case, visit the fortress in the evening when the sun sets beyond the horizon. The view is so breathtaking that many couples enjoy coming to the fortress at this time of the day to stand and admire the sunset and the scarlet heaven.
As the Aegean Sea washes Lesbos on all sides, it is possible to get to the island by ferry. This means of transport brings passengers from Athens to the nearby city of Mytilene. There is one more way to reach Lesbos – by air. There is only one airport on the island, and it receives daily domestic flights from the capital of Greece. The flight lasts only half an hour. After that, tourists need to get a taxi or use a public bus to reach Mithymna. The total journey time is approximately one hour in this case.
This guide to iconic landmarks and sights of Molyvos is protected by the copyright law. You can re-publish this content with mandatory attribution: direct and active hyperlink to www.orangesmile.com.

City tours, excursions and tickets in Molyvos and surroundings

Survived castles around Molyvos
♥   Castle 'Mithymna Castle' Mithymna, 0.2 km from the center. On the map

Sights around Molyvos from our guide 'Extreme places on Earth' 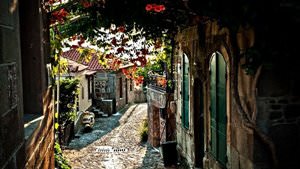 Distance from Molyvos center - 0.3 km.
Many of the streets of Molyvos, including a beautiful central road, are paved with large stones. Thus, it is advisable to have comfortable shoes for walking. It is also worth noting that the small town streets are quite confusing, so before taking a stroll inexperienced tourists should definitely stock up a couple of maps. Besides marvelous wisteria, the main street is adorned with priceless architectural monuments. Those are very unusual colorful houses in Turkish style that were built over a hundred years ago. … Read further

Search touristic sites on the map of Molyvos

Sightseeing in regions nearby Molyvos

Lesvos
Lesvos is the motherland of a great ancient Greek poet Sappho. She was the head of a school for girls and she jumped down from rock into the sea because of her tragic love. The rock’s name is Eresu and it is located in the western part of the island. Starting from ancient times this island is full of thick pine groves and tropical tress. Because of this fact the air on ... Open »
Mitilini
In the center of the town there is a picturesque bay, near which are always moored luxurious yachts. Here are also arranged boat trips for visitors, during which you can explore the island and learn numerous stories about it. If you make a walk along the coast, you will find many hospitable restaurants, cafes, bars and taverns which offer both national cuisine and traditional ... Open »
Limnos Island
The history of the island's capital, the city of Myrina, embraces more than 2,500 years. The city was named after the wife of the first king of Limnos. One of its most interesting sights is the Byzantine castle of Castro. Despite the fact that this monument of history has being lying in ruins for many years, the castle still looks very impressive. The structure is situated on a ... Open »
Chios Island
The Greek island of Chios is located in the Aegean Sea, near Anatolia. For many years it has been left out in the cold by foreign travelers. However, Greeks preferring solitude and peace were used to spend their vacations and weekends there. With the growing popularity of eco-tourism the island of Chios has received the status of the world famous resort; its main value is its ... Open »
Lemnos
Lemnos is a Greek town located on the north of the Aegean Sea. This is an ancient island that is famous starting from 1 thousand years BC. The island is called after the white mountain that has been used as a guideline for sailors centuries ago. This is a volcanic island that is made of mostly shale and volcanic rock. The population of the island is traditionally occupied in ... Open »
Chios
The island is a real finding for tourists. Beautiful beach island, unbelievably beautiful sceneries of rolling hills and low mountains, the absence of crowds of tourists allow spending a wonderful and a relaxing holiday here. Oros and Pelineon peaks located in the northern part of the island are especially picturesque. Visits to the ancient temple of Apollo, the medieval ... Open »

All about Molyvos, Greece - sightseeings, attractions, touristic spots, architecture, history, culture and cuisine. Prepare your trip together with OrangeSmile.com - find out the 'must see' things in Molyvos, which places to visit, which excursions to take, where the breathtaking views are waiting for you. Planning your trip with this travel guide will help your to get the most out of Molyvos in few days.