Sightseeing in Limnos Island - what to see. Complete travel guide 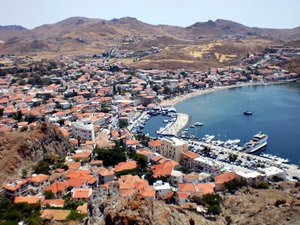 Limnos is one of the most charming, quiet and comfortable of the Aegean islands. This lovely Greek island is of volcanic origin, so it’s rich in flora and fauna. Over the past few years, infrastructure of Limnos reached perfection, so there are a variety of excellent hotels, restaurants, shopping centers and entertainment venues. However, the island was able to maintain its pristine harmonious atmosphere. That’s the best place to stay in privacy, so young families with children and elderly people will fill comfortable there.
Shopping in Limnos Island - main shopping streets, outlets and boutiques
One of the most truly Greek souvenirs is a bottle of olive oil in the shape of amphorae or a famous Greek character. The oil is widely produced here not for tourists but for locals. They …

Open
The main attractive feature of Limnos is its beautiful beaches, so you can combine exploring of local attractions with beach rest. The optimal location of the island at the crossroads of major shipping routes for years attracted attention of the conquerors. Many unique archaeological sites were discovered on the island, as well as artifacts dating back to the Neolithic Age. Poliohni district lies in the south-eastern part of Limnos. According to archaeologists, 4,000 years ago there was a large city. The ruins of the ancient city of Hephaestus attract attention of history buffs and those who have long dreamed of a walk along real archaeological areas.
The history of the island's capital, the city of Myrina, embraces more than 2,500 years. The city was named after the wife of the first king of Limnos. One of its most interesting sights is the Byzantine castle of Castro. Despite the fact that this monument of history has being lying in ruins for many years, the castle still looks very impressive. The structure is situated on a hilltop providing view of other important tourist attraction, the old Christian church. Strolling along the waterfront of the capital, you can see the beautiful monument dedicated to Russian naval commanders. It recalls the events of 18-19th centuries, when the fleet of the Russian Empire was sent to the aid and freed the island from the Turkish conquerors. The most visited cultural site of Limnos, the Archaeological Museum, is situated at the waterfront too. Copyright www.orangesmile.com
Family holidays with kids in Limnos Island. How to entertain your child, things to show to children.
Lemnos is an island where you can introduce your child to the basics of Greek mythology. According to ancient Greek legends, the island was sacred to Hephaestus, god of metallurgy. Zeus …

Open
The first capital of the island, Moudros, offers rich excursion programs. There are well-known historical monuments literally on every street. The Church of the Annunciation, the amazingly beautiful and harmonious architectural monument, is particularly notable. A few years ago, the old Cossack cemetery was restored in Moudros; it’s of great interest from an architectural point of view. 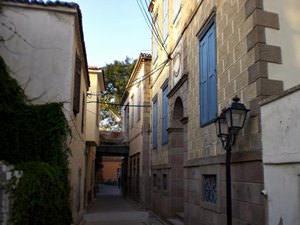 The ancient fortress of Kotsinas is situated in the harbor of the same name. Powerful fortifications have well preserved to our days, so they are definitely worth visiting. Those fond of mysticism would like Despotis Mountain situated nearby. That’s an extinct volcano, the eruption of which formed the island. Many amazing myths, legends and beliefs are associated with the volcano; locals believe in the amazing power of these places. According to one legend, a forge of Hephaestus was situated in Despotis Mountain. There are lots of fascinating tourist destinations on Limnos, the study of its natural attractions also brings a lot of experience.
Cuisine of Limnos Island for gourmet with top restaurants and cafe
If you want to be fully satisfied with your holidays on Lemnos, be sure to enjoy local cuisine. Fortunately, there is no lack of catering establishments on the island. Locals call them …

Open
In recent years, the number of travelers who visit Lemnos has grown a hundred times. However, despite this fact, the island didn’t lose its peaceful atmosphere and national charm. It is still hard to call Lemnos a typical tourist center. There are many beautiful sandy beaches for any taste, including calm and secluded ones and lively beaches with a well-developed infrastructure. Fans of active recreation are usually fond of Platy Beach that has a water sports center open in its territory. This is a great place to master the basics of surfing and diving, and, of course, enjoy water skiing. 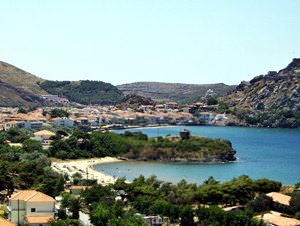 Fans of fishing have a one-of-a-kind opportunity to visit the charming town of Kotsinas that is located in the same-named haven. Many are aware of this town because of a medieval fortress. For hundreds of years, fishing remains the main occupation of local people. There is also a charming beach that is suitable for idyllic relaxation nearby. Besides that, travelers are always welcome to try fishing together with local fishermen. Excellent taverns are another advantage of this charming island. Local taverns traditionally serve the most delicious national dishes with freshly caught seafood.

This guide to iconic landmarks and sights of Limnos Island is protected by the copyright law. You can re-publish this content with mandatory attribution: direct and active hyperlink to www.orangesmile.com.
Limnos Island - guide chapters 1 2 3 4 5 6 7 8 9

National and city parks around Limnos Island
♥   World Heritage Site 'Mount Athos' , 90.5 km from the center. On the map

Search touristic sites on the map of Limnos Island

Sightseeing in regions nearby Limnos Island

Lemnos
Deep into the island is located Kondias – a picturesque settlement build between high pines. In this town almost all houses have red tiled roofs, creating cozy and warm atmosphere. A part of Lemnos that is closer to Turkey, the place where once has existed Troy, is the location of Poliochni. Actually, this town has been founded before Troy. In 2100 BC a great earthquake ... Open »
Thassos
Temple of Apollo is another monument of antiquity located in Agora. Through the backdoor of the temple you can go down into the tunnel, which will lead you to the downtown area. According to archaeologists, this underpass was constructed in the 6th century BC. If the attractions of the city don’t seem enough for you, attend an excursion to the nearby town named Kavala. You ... Open »
Molyvos
As the Aegean Sea washes Lesbos on all sides, it is possible to get to the island by ferry. This means of transport brings passengers from Athens to the nearby city of Mytilene. There is one more way to reach Lesbos – by air. There is only one airport on the island, and it receives daily domestic flights from the capital of Greece. The flight lasts only half an hour. After ... Open »
Lesvos
Lesvos is the motherland of a great ancient Greek poet Sappho. She was the head of a school for girls and she jumped down from rock into the sea because of her tragic love. The rock’s name is Eresu and it is located in the western part of the island. Starting from ancient times this island is full of thick pine groves and tropical tress. Because of this fact the air on ... Open »
Kavala
Any street in Kavala will bring you to the top of Simbolo Mountain. The main sight of the town – a Byzantine fort – is located there. This fort is interesting not only by its medieval halls and high towers but also by a spacious park that surrounds the building. Numerous old houses can be found is the old part of the town. Everything in Kavala simply dives in greenery and ... Open »
Alonissos Island
The largest settlement of the island and its capital is Patitiri; this town is made for walking. You can admire its picturesque streets infinitely. The charming town features old churches. Connoisseurs of architecture would like residential buildings, the appearance of which may seem rather unusual. White houses and cottages situated on steep mountain slopes look incredibly ... Open »

All about Limnos Island, Greece - sightseeings, attractions, touristic spots, architecture, history, culture and cuisine. Prepare your trip together with OrangeSmile.com - find out the 'must see' things in Limnos Island, which places to visit, which excursions to take, where the breathtaking views are waiting for you. Planning your trip with this travel guide will help your to get the most out of Limnos Island in few days.