Sightseeing in Chania - what to see. Complete travel guide 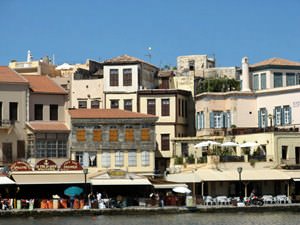 A pearl of Crete, this is a charming and a picturesque town, the rest in which will bring in a lot of new experiences. The old part of the town is particularly popular among tourists. Here you can walk along the port area and the waterfront, visit numerous restaurants and cafes, go to the eastern market or move to one of narrow streets, admiring old Venetian houses.
Excursion over cultural sights of Chania - 'must visit' points of interest
The main part of city's attractions is concentrated in the so- called Old Town. It is noteworthy that during the Second World War, this part of Chania has miraculously remained intact, so …

Open
Agora market is one of main attractions of the old part of the town. The market was opened in 1911. The shopping rows here are covered and built in the shape of a cross. The market is strictly oriented to the cardinal. Another interesting market is called "Leather Quarter". As you might guess from the title, here you will find the largest choice of leather. If you have not found what you need, go to one of several sewing workshops located nearby and order clothing or shoes.
San Francisco Church is the main religious landmark of this place. Nowadays the church has been turned into Archaeological Museum. Just like many historic religious buildings of this town, the church was turned into a mosque during the Turkish conquest. Today bathing pools and a minaret remind of those times. Copyright www.orangesmile.com
Your active city break in Chania. Attractions, recreation and entertainment - best places to spend your day and night here
The resort is sure to appeal to those who prefer outdoor activities. There are all conditions for an exciting pastime. There are beautiful parks and modern entertainment centers, colorful …

Open
You will also find several mansions and villas that once have belonged to the former Venetian nobility. The largest and the most beautiful palace is Renieri. This palace still keeps the atmosphere of those days, as well as the original interiors and furnishings. The port area is the location of Maritime Museum. In this museum visitors will be able to see a collection of navigational instruments, ship models and other attributes associated with famous navigators. Venetian port will be no less interesting for tourists. There is a Turkish mosque built in the 16th century on the territory of the port, as well as several churches and monuments. 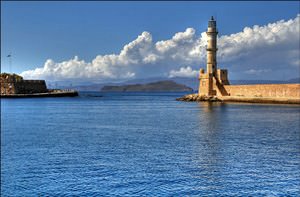 The Mosque of Janissaries located near the Venetian Harbor is an interesting historical site. It was built in the middle of the 17th century. At that time, the significant part of Crete was under the Ottoman Empire. As archeological researches have shown, the mosque was built on the ruins of the destroyed Venetian bastion. Today, the construction impresses with its inimitable architecture. The mosque has preserved its initial interior. Nowadays, interesting art exhibitions are held in the mosque.
Advices to travellers: what you should know while being in Chania
1. It is convenient to call other cities and countries from street payphones; they can be found literally on any city street. Payphones accept a special plastic card that can be purchased at …

Open
In the center of the historical district of Chania, there is the Cathedral of the Three Martyrs that is the main cathedral in the city. The history of the temple is very interesting. In the 14th century, the St. Blessed Virgin Church was built at its site. Its main relic was the ancient icon. In the middle of the 17th century, the city was conquered by the Turks. They reconstructed the old church and opened the soap factory here. The main relic of the church has been preserved and stored in a warehouse for several hundred years. In the second half of the 19th century, one of the factory workers dreamed of the St. Virgin. She specified a path to the icon. When it was found, the temple was restored. Now, it is one of the most beautiful religious monuments in the neoclassic style. 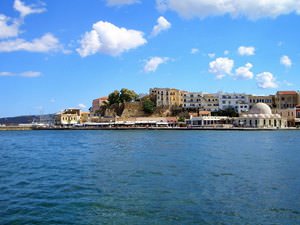 In the city and its surroundings, there are several old monasteries, one of which is the Orthodox Gouverneto Monastery. It was found in 1548 but the founder’s name is still unknown. According to one of the legends, the initiator of the monastery construction was one of the wealthy local residents. The initial building was used for defensive purposes, so it resembles an impregnable fortress. The monastery was damaged in the period of the Second World War. It was completely restored only a few years ago.
Cuisine of Chania for gourmet with top restaurants and cafe
There are more than a hundred of attractive restaurants and cafes in Chania, and every dining place may surprise visitors with its original specialties. One of the most popular and …

Open
The Byzantium Museum of Chania is still one of the most visited cultural centers of the city. Its collection contains unique pieces of art of the Byzantium period, jewels, ceramic items and religious artifacts. In the museum, you also can admire unique wall frescoes. The building where the museum is situated now has an immense historical value. It was built in the 15th century. Initially, this building served as the monastery.

This guide to iconic landmarks and sights of Chania is protected by the copyright law. You can re-publish this content with mandatory attribution: direct and active hyperlink to www.orangesmile.com.
Chania - guide chapters 1 2 3 4 5

Survived castles around Chania
♥   Castle 'Firkas Fortress' Chania, 0.9 km from the center. On the map

Sights around Chania from our guide 'Extreme places on Earth' 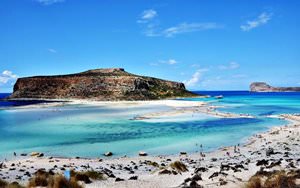 Distance from Chania center - 52 km.
If believe the legend, then hundreds of years ago, the island served as a haven for pirates, which built a fortress on its territory. Today, during a tour to the island, tourists can see the ruins of the castle and many other amazing objects. In addition, the hilly island offers a spectacular view of the snow-white coast. Another unique feature of the Bay of Balos is that it is a place of connection of three seas: the Aegean, Ionian and Libyan. The lagoon is completely closed from the wind, so even during a heavy storm, there are no large waves there. The best way to get to the beach is to rent a boat at the Kassimos Port. … Read further 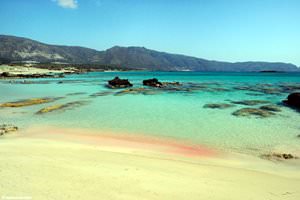 Distance from Chania center - 51 km.
According to the legend, it was after these tragic events that the sand on the coast turned pink. At the highest point of the island is an important historical landmark - a memorial dedicated to the tragic events of 1824. Elafonisi beach is very popular with tourists. In the height of the season there are always a lot of tourists on its territory. Those who like to relax in a more peaceful environment, will enjoy a stroll to the nearby beach of Kedrassos, which is famous for its quieter and less crowded surroundings. … Read further

Search touristic sites on the map of Chania

Sightseeing in regions nearby Chania

Rethymno
Venetian fortress built in the middle of the 16th century is one of the main attractions of the city. One of the towers is equipped with an observation area that features beautiful views of the city, beach and snow-capped Ida Mountains. Arkadi Monastery is the most important religious landmark of this place. It is a truly beautiful building made in best traditions past ... Open »
Crete
Crete is an economic and cultural center of Greece with well-developed tourist infrastructure. This is one of the most popular European resorts with warm sea, subtropical climate, modern resorts, and numerous entertainments. Here you will find countless cafes and restaurants that serve national dishes, and entertain visitors by live music and dancing the traditional sirtaki ... Open »
Heraklion
From the historical point of view suburbs of Heraklion are the most interesting place. Palace of Knossos is the most famous building of this region. The palace is famous not only in Greece, but also abroad. This is an exceptionally beautiful building, halls and corridors of which keep the atmosphere of previous centuries. The gates of the fort are decorated with statues of ... Open »
Kythira Island
The ancient fortress is the main attraction of the capital. Another important symbol is the beautiful chapel Panagia Myrtidiotissa. It’s incredibly beautiful and interesting from an architectural point of view; a lot of amazing stories are associated with the construction. Next to the church you can see several old guns; hundreds of years ago they have defended Kythira from ... Open »
Hersonissos
This town is home to approximately nine thousands of people, but they are almost invisible among tourists. Local people manage to create such an unobtrusive service that it seems everything is done by itself. The island is very popular among the British, Irish and Dutch tourists, so the majority of bars are made in the Dutch and Irish styles. In true, the town becomes alive ... Open »
Milos Island
The largest settlement and the former capital of the island is the town of Adamas; the lovely Church of the Holy Trinity is among its historical characters. The Mineralogical Museum stands out from cultural venues; it offers visitors a rich collection of minerals that have been discovered in different periods of exploring the island. The ancient French cemetery, where soldiers ... Open »

All about Chania, Greece - sightseeings, attractions, touristic spots, architecture, history, culture and cuisine. Prepare your trip together with OrangeSmile.com - find out the 'must see' things in Chania, which places to visit, which excursions to take, where the breathtaking views are waiting for you. Planning your trip with this travel guide will help your to get the most out of Chania in few days.