Sightseeing in Agistri Island - what to see. Complete travel guide 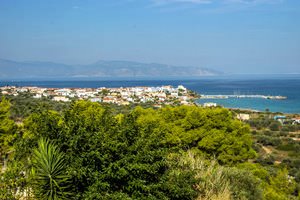 Agistri is one of the most beautiful and interesting places to visit among the Saronic Islands. It attracts primarily with its picturesque beaches and unique nature. Despite its compact size, this beautiful island is suitable for various activities. Fans of excursions would enjoy a decent selection of interesting historical sites, as well as unique creations of nature, which are also worth to be included in the vacation program.
Family holidays with kids in Agistri Island. How to entertain your child, things to show to children.
Agistri is a small island, its area is just 14 square kilometres. However, an active and curious child won't be bored here. Agistri attracts people with its rich past. The island was …

Open
The capital of the island is the picturesque village of Megalochori, whose name translates from Greek as ‘a mill.’ The picturesque settlement has got its name not accidentally, as the only one mill on the island is situated there. It has been working 50 years ago; today it’s one of the most important historical sites in Agistri. The windmill had been built in 1812; more than a hundred years it has being used for its intended purpose.
The oldest religious building of the island, the Church of the Holy Apostles, is on the outskirts of the capital. A lot of interesting stories are associated with it. Fans of historic architecture would be amazed to see the Zoodohou Pigis Church built in the best traditions of national style. The entire territory of Megalochori is an invaluable historical monument; the village has many old stone houses and charming streets. Copyright www.orangesmile.com
Cuisine of Agistri Island for gourmet with top restaurants and cafe
Despite the size of the island, you can find all the Greek dishes here. If you want to try traditional food, choose a place far from touristic spots. Taverns usually serve Greek dishes and …

Open
After admiring the sights of the capital, it’s worth to go to the nearby town of Limenari. Its main symbol is the amazing Agia Kiryakis Church surrounded by rocks and pine forests making it to look inimitably. The building of the old school that’s a true example of folk architecture of yesteryear has remained in the town. Travelers who can’t imagine their rest without trips to museums won’t be bored. In the heart of the capital there is the modern cultural center Agistri, part of which is occupied by the ethnographic museum. There is an interesting collection of exhibits depicting the history and cultural traditions of the indigenous population. 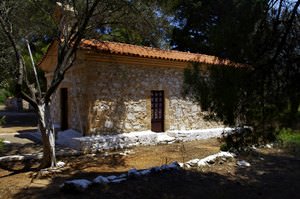 Those who want to walk through interesting archaeological areas largely represented on the island have to go to Aponisosa. There is St. Nicholas Church built in Byzantine style unusual for the island. Amazing natural attractions could help to diversify vacations. The island has a wonderful lake, as well as lots of picturesque hills offering great panoramic view.
Authentic traditions, festivals and lifestyle of Agistri Island inhabitants
Agistri is filled with festive atmosphere. Local inhabitants have a very relaxed way of life. It is not obvious. Locals believe that the idiom «Business before pleasure» is not truthful. …

Open
Numerous travelers visit Agistri with only one purpose – to visit its picturesque beaches. The most popular beach is located near the village of Skala. This beach is distinguished by soft, golden sand. Not far away from the beach, vacationers will find numerous hotels, restaurants, shops, bars, and nightclubs, so one can easily have fun all day long there. Divers are also in love with this beach because there are several centers specializing in water sports on the island. 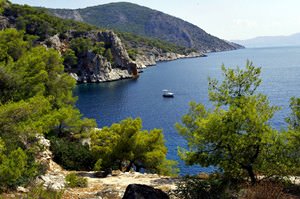 The rocky beach of Skliri is a no less fabulous place. The beach has an unusual amphitheater shape. Dense pine woods grow close to the beach. Fans of relaxing in picturesque places will definitely find Skliri worth of their attention. The beach has several charming hotels and restaurants, but that doesn’t mean the area has lost its original charm and harmonious atmosphere. The enchanting Chalkiada Bay is located within walking distance of the beach. Crisp white pebble is one of the distinctive points of this fabulous place. The cozy beach is incredibly popular with couples.
Excursion over cultural sights of Agistri Island - 'must visit' points of interest
Agistri is a small island, which size is only 14 square kilometres. Scientists suppose that it was inhabited more than 2500 years ago. Unfortunately, there is almost no evidence of ancient …

Open
Megalochori is a popular resort settlement that has its own pebble and sand beach. Because this beach is located in a naturally formed bay, it is very calm and suitable for vacationers with children. Interesting historical landmarks, however, remain the main attraction of the resort. Tourists will find interesting museums and cultural centers within walking distance of the beach. 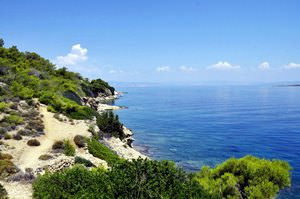 Fans of scuba diving will be mesmerized by Mariza Beach. It is a rocky beach surrounded by gorgeous pines. As there is no sand, water is always transparent and clean in this part of the island. It is hard to find a more suitable place for scuba diving and snorkeling. Comfortable location is one more advantage of Mariza. Moreover, there are interesting historical landmarks nearby. Besides beachside entertainment, guests of the island are welcome to try other types of active pastime. For example, they can make walking or cycling tours, enjoy fishing or try to ride a horse in one of a few equestrian schools. By the way, horse riding schools offer classes for both adults and children.

This guide to iconic landmarks and sights of Agistri Island is protected by the copyright law. You can re-publish this content with mandatory attribution: direct and active hyperlink to www.orangesmile.com.
Agistri Island - guide chapters 1 2 3 4 5 6 7 8 9

City tours, excursions and tickets in Agistri Island and surroundings

Survived castles around Agistri Island
♥   Castle 'Markellos Tower' Aegina, 8.4 km from the center. On the map

National and city parks around Agistri Island
♥   National Park 'Ethniko Parko Schinia Marathona' , 77.8 km from the center. On the map

Sights around Agistri Island from our guide 'Extreme places on Earth'

Distance from Agistri Island center - 69.5 km.
During the tour, guests of the city will hear interesting legends about the birth of Dionysus and Heracles, about the exploits of the legendary king Cadmium and bloody battles that has being devastated the thriving city for thousands of years. Developed tourist infrastructure of the city will be a nice addition to stay, as modern Thebes offers its guests a lot of attractive hotels, magnificent local restaurants and lots of amazing places to relax. … Read further

Distance from Agistri Island center - 52.9 km.
At present the crypt is one of the most important monuments of Mycenaean civilization. All those interested can not only look at it from the outside, but also look inside the dome-shaped building. At the time of construction the treasure house was the largest dome-shaped structure on earth. Only a few years later the larger buildings - the Roman Pantheon and the Mercury temple in Baia were built. … Read further

Distance from Agistri Island center - 51.6 km.
Along the huge embankment you will see several rows of slim palms and ornamental plants. These decorations look amazing and adore both – tourists and locals. Visitors have a great range of various amazing entertainments. They can choose from the most interesting walk excursions or even order the boat excursions to Bourtzi Fortress. Waterfront of Nafplion is a lively, outstanding and crowded place in the town. … Read further

Search touristic sites on the map of Agistri Island

Sightseeing in regions nearby Agistri Island

Aegina Island
The legendary Kivernio is situated in the city center; the first government of independent Greece was there. This stone building that is unremarkable at first glance influenced on many important historical events. In the mid19th century, it was the residence of the Bishop of Aegina, in the second half of the 19th century refugees of Cretan Revolution were hiding in its walls. ... Open »
Hydra Island
Other important symbols of the island are its magnificent old mansions built in the 17th - 19th centuries. Many of them are available to visit; the atmosphere of the past centuries is completely restored there. Each house is a real museum with priceless artifacts, including antique furniture, beautiful paintings and tapestries, carpets and mosaics. The mansion of Lazaros ... Open »
Corinth
It is not allowed to drive vehicles close to the beach, so the air is clean and no sound of traffic ruins the serene atmosphere of this place. If you visit Corinth with small children, there is no need to worry about their safety because the sea is shallow near the coast. Moreover, the city’s authorities make sure than the beach and the coastal water are clean and safe. As ... Open »
Loutraki
Currently Loutraki is a worldwide famous therapeutic spa. Even during the times of the Roman Empire here has been built a complex of baths, hospitals and churches, at the foot of which have been located numerous medicinal springs. Nowadays a modern hydrotherapy center is built in the city. In the center you can undergo health treatment based on the method of curative mineral ... Open »
Spetses Island
Among the other attractions of the capital the Church of the Virgin Armata is notable. Its construction has begun in 1824, three years after the end of the war. In 1830, the beautiful church met first parishioners, since then it remains the permanent symbol of the victory for the islanders. The Cathedral of St. Nicholas was the witness of heroic battles. The first revolutionary ... Open »
Attica Region
The beautiful temple of Demeter is located in Eleusis. Today it hosts the museum representing to its guests a collection of artifacts of various ages. Egina island is an interesting place to visit too. There is a number of natural landmarks and the mystique ghost city of Palaiokhora. Abandoned few hundreds of years ago, it has survived until this day in excellent condition. ... Open »

All about Agistri Island, Greece - sightseeings, attractions, touristic spots, architecture, history, culture and cuisine. Prepare your trip together with OrangeSmile.com - find out the 'must see' things in Agistri Island, which places to visit, which excursions to take, where the breathtaking views are waiting for you. Planning your trip with this travel guide will help your to get the most out of Agistri Island in few days.