Sightseeing in Ikaria Island - what to see. Complete travel guide 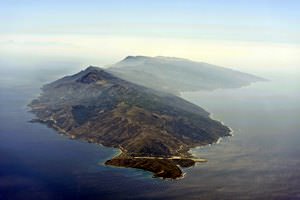 Ikaria is the picturesque island in the Aegean Sea, which has received its name in honor of the mythical character Icarus. That’s a very quiet and picturesque island without large-scale resort centers or noisy environment. In addition to the unique nature, the island features mineral springs, so a huge amount of thermal spas are equipped there for holidaymakers. Fans of exploring historic sites would like Ikaria too. The first settlement on the island was founded in ancient times.
Cuisine of Ikaria Island for gourmet with top restaurants and cafe
You can’t plunge into the culture of a country without trying its national dishes. You should definitely miss a couple of meals at your hotel and visit the local taverns. It is easy to …

Open
Local ancient towns have preserved many historical monuments; one of the most interesting to explore is the town of Vafes. There is the ancient Monastery of Munde characterized by extremely harmonious atmosphere. The Church of the Annunciation of the Virgin is considered one of the most interesting among religious attractions; it’s decorated with luxury wooden handmade iconostasis. Within the walls of the temple there is a rich collection of icons, whose age is more than a hundred years. The temple has been founded in the 15th century, since than its appearance hasn’t changed.
The main historical symbol of Ikaria is the Castle of Koskinou built to protect the island from the Byzantine conquerors. Fortification is located on top of the Mount Koskinas, one of the highest points of the island. Walls of the ancient Church of St. George have survived outside the city. Well next to the fortress there are excellent viewing platforms for tourists. Copyright www.orangesmile.com
Authentic traditions, festivals and lifestyle of Ikaria Island inhabitants
While communicating with Greeks remember that some of the gestures have peculiar meaning here. For example, they express any objections by raising their eyebrows and their whole head …

Open
Numerous caves attracting not only curious travelers, but archaeologists represent the feature of the island. Many priceless artifacts of ancient times were discovered in times of exploration; today all those interested can walk around the mysterious caves. One of the most interesting places to visit is Katafygi cave situated next to the beautiful Church of St. Nicholas. 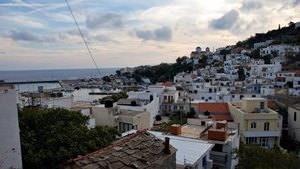 Many important sights can be found in the capital of the island, Agios Kirikos. The Archaeological Museum, as well as the Agios Kirikos Monastery that is one of the oldest on the island operates there. The important archaeological site, where the antique acropolis has being hundreds of years ago, is not far from the capital. A great place for hiking is the port city of Evdhilos

. A huge number of beautiful buildings constructed in the neoclassical style can be seen there. The whole area of the town is the incredibly amazing architectural complex.
Excursion over cultural sights of Ikaria Island - 'must visit' points of interest
Ikaria is called in honour of famous Icarus, the son of an architect Daedalus, made his fatal fall from the sky during his flight from Crete because his wax and feather wings melted. It is …

Open
Kambos attracts fans of ancient history; this is where the ancient settlement of Inoya has been situated. For many years, scientists have been investigating these places; you can see their precious findings in the local archaeological museum. During a walk through Langada you can enjoy a lot of beautiful old buildings and ruins, which have defended the island against pirates for many years. 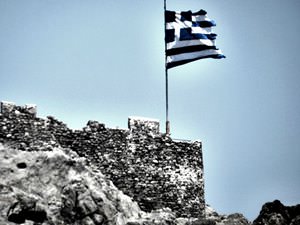 The picturesque Chalari Gorge will appeal to nature lovers. It lies in the path of birds’ migration taking place several times a year. The gorge is characterized by an abundance of rare species of plants; amazing walking routes lie on its territory. Those who wish to enjoy the panoramic view of the island are recommended to climb Atheros Mountain. Its foothill areas are very interesting to study, not only to biologists, but also to those interested in ethnography.
Your active city break in Ikaria Island. Attractions, recreation and entertainment - best places to spend your day and night here
Enthusiastic naturalists will surely love Ikaria. You should definitely visit Chalari Gorge which is located close to Nas settlement. It is a bioreserve protected by international …

Open
Guests of Ikaria like small historical villages as much as larger resort destinations. Having visited them, travelers will be able to admire the national heritage of the island and get acquainted with the lifestyle of local people. These smaller settlements have a very interesting architecture with miniature houses that have thick roofs made of stone. Such peculiar constructions are not random – on hot days, these thick stone roofs protect the houses from overheating and help to keep cool temperature inside. In smaller settlements, there are charming artisan shops and cute taverns where visitors can always try popular national treats. 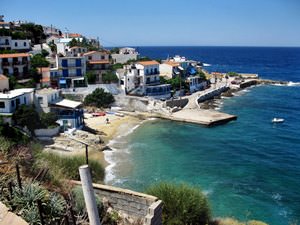 In a variety of beautiful resort towns, travelers are particularly attracted by the wonderful seaside settlement of Yaliskari. It is believed that that most beautiful and picturesque beaches of the island, Mesakti and Livadi, are not far from the town. Yaliskari is located in a picturesque hilly area, so travelers can easily combine beach recreation with the exploration of picturesque areas. There are many naturally formed observation decks that offer stunning views of the seaside and the nearby island of Diapori. Nas is a town that is famous mostly because of its charming beach that is located in an important and interesting archaeological area.

This guide to iconic landmarks and sights of Ikaria Island is protected by the copyright law. You can re-publish this content with mandatory attribution: direct and active hyperlink to www.orangesmile.com.
Ikaria Island - guide chapters 1 2 3 4 5 6 7 8

City tours, excursions and tickets in Ikaria Island and surroundings

Survived castles around Ikaria Island
♥   Castle 'Monastery of Saint John the Theologian' Patmos, 47.8 km from the center. On the map

Search touristic sites on the map of Ikaria Island

Sightseeing in regions nearby Ikaria Island

Patmos Island
Patmos is one of the smallest and most attractive islands of Greece. It features amazing religious sites, rocky desert landscapes, as well as incredibly beautiful beaches. Patmos is one of the most secluded and tranquil islands of Greece, so many travelers visit it only during sightseeing tours. Vacations on this beautiful island will give a lot of impressions for those who ... Open »
Samos Island
This Greek island is famous for its numerous Orthodox monasteries; the most famous among them are Zoodohas Pigi, Timiu Stavrou and Megan Spilianis. They have been visited by pilgrims from all over the world paying homage to unique Orthodox relics for many hundreds of years. Walk through the picturesque Koumaradei, which is located in the southern part of the island, promises to ... Open »
Mykonos Island
Mykonos is the scenic Greek island. It's widely known as the beach resort center and a focus of many unique Antique landmarks. The island is very famous due to its night clubs, thus, the most of its visitors are young tourists. However, Mykonos has way more to offer than just nightlife. Exploration of island's landmarks can become an exciting adventure. Old windmills situated ... Open »
Samos
Samos is a beautiful tourist resort, which is located in the Aegean Sea. This is a resort town that has focused all its economic activities on delivering travel services. This small island has no large industrial capital, so Samos totally works for tourists. Among the resort areas of the island the most significant ones are the following towns - Pythagorio, Karlovassi, Vatha ... Open »
Mykonos City
Among the architectural sights of Mykonos we should mention several old churches, the building of which took place several centuries ago. There are also several museums here with one of them to be entirely devoted to archaeological finds. The island is a true paradise for fishing enthusiasts. The reason for this is in the fact Mykonos is surrounded by small uninhabited islands ... Open »
Leros Island
The most visited cultural center of Leros is the Archaeological Museum located in Agia Marina. It can boast hundreds of priceless finds of archaeologists, and museum collection is regularly updated. There are several major archaeological areas nearby, where you can admire ruins of ancient temples and residential buildings, stroll through the streets of prehistoric towns and ... Open »

All about Ikaria Island, Greece - sightseeings, attractions, touristic spots, architecture, history, culture and cuisine. Prepare your trip together with OrangeSmile.com - find out the 'must see' things in Ikaria Island, which places to visit, which excursions to take, where the breathtaking views are waiting for you. Planning your trip with this travel guide will help your to get the most out of Ikaria Island in few days.