Sightseeing in Skopelos Island - what to see. Complete travel guide 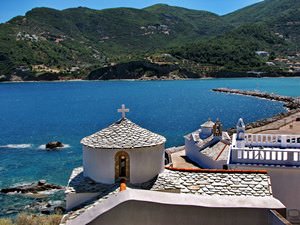 Skopelos is one of the most picturesque beaches in Northern Sporades; only 20 kilometers share it with mainland Greece. It’s rather large and is the second largest island of the archipelago; the length of Skopelos is about 20 kilometers and width is just 5 kilometers. It’s ideal for those who prefer hiking, relaxing at beautiful natural places and visiting exciting excursions.
Best beaches and recreation areas around Skopelos Island
There are more than a hundred beaches on Skopelos to choose from. Stafylos Beach is the closest to the capital. It doesn’t feature infrastructure, and therefore is almost never …

Open
In addition to unique nature, the island features a huge number of religious sites. There are more than 350 churches and chapels, each of which has its own unique history. Island's population is less than 5,000 people. It has a very relaxed atmosphere and rhythm of life.
The capital of the island is a charming town of Skopelos featuring unique atmosphere of national colour. The central part of the city is completely given out to pedestrians, it’s very nice to explore it on foot and admire picturesque white houses with colorful balconies and shutters. There are many attractive taverns, shops and workshops at the downtown making trips more interesting. Copyright www.orangesmile.com
Top hotels in Skopelos Island for business trip or short vacation
There are more than 150 hotels and apartments on the island enjoying high demand among tourists. One of the most upscale hotels is Adrina located in the picturesque resort village of …

Open
Be sure to take a stroll along the waterfront and the capital, where you can see colorful fishing boats. They remain one of the most emblematic features of the island. You can see tourists making memorable photos with colorfully decorated fishing boats every day. 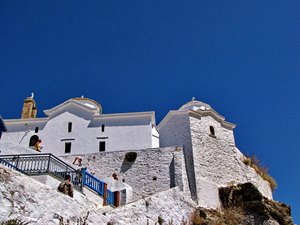 As noted above, the number of religious sites on the island of Skopelos is incredibly large. In the capital, there is one of the most beautiful monasteries, Zoodochos Pigi

, located on the coast. That’s a classic architectural monument of local style. Spacious stone terraces surrounding the monastery would be great for admiring the sea views.
Shopping in Skopelos Island - main shopping streets, outlets and boutiques
Don’t leave Skopelos without a bottle of olive oil. It is highly produced and used on the island. It is obvious because oil is not only a souvenir product here. You will find a bottle …

Open
One of the most popular entertainment options is climbing Mount Palouki that is 567 meters high. There are many fascinating hiking trails at its foothills; there you can also see several ancient monasteries and churches. Among them Sotiros

monastery surrounded by dense forests is worth mentioning. 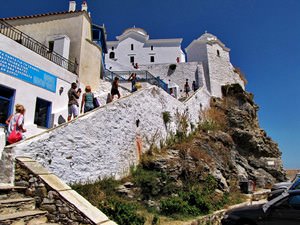 There are very unusual attractions on the island, including Sendoukia Graves. Graves are located high in the mountains; their name is very conventional, as the exact purpose of these structures is unknown. The exact age of the tombs is unknown too, but they remain one of the most visited tourist sites on the island.
Family holidays with kids in Skopelos Island. How to entertain your child, things to show to children.
Skopelos is an incredibly picturesque island. Despite the fact that the island is situated not far from mainland Greece, it is not touched by civilization. Active and curious children will …

Open
The highest point in North Sporades, Delphi Mountain, can be found on Skopelos. Climbing it is one of the most emblematic and interesting activities. The mountain is 681 meters; its slopes are covered with thick impenetrable forests. It’s recommended to go camping only accompanied by a guide, since trails on the slopes of the mountain are very twisty and confusing. The main attraction of Skopelos is Agios Ioannis Prodromos monastery perched atop steep cliffs above the sea. You can climb the steep stairs to the top of the cliff. This place has become the world-famous landmark began after Mamma Mia movie. This is where several episodes were shot. 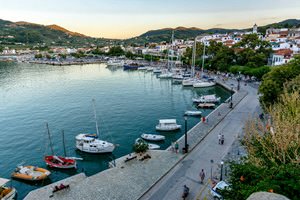 Besides the observation of historical landmarks, guests of Skopelos are welcome to make their vacation even more exciting by relaxing on picturesque beaches. Besides its everlasting popularity, Limnonari Beach has managed to retain its natural beauty. Located in an incredibly beautiful bay, this sandy beach is like a magnet for all fans of scuba diving. Panormos Beach is located in the same named bay. The beach is at some distance from the capital, it is an incredibly calm place that is almost never crowded. Travelers seeking true relaxation and untouched natural beauty will be delighted. There are many wonderful places suitable for a walk not far from the beach.
Cuisine of Skopelos Island for gourmet with top restaurants and cafe
Skopelos is a small island but there are many catering establishments on it. They are called «taverns» in Greece. Taverns are places which are mostly visited by the locals. They have a …

Open
Milia is considered the most beautiful beach in Skopelos. It is also the largest beach in the region. A beautiful pine forest grows close to the beach, making the landscape an unforgettable one. Milia is a fabulous place for vacationers with children as the sandy beach is calm, and strong waves are incredibly rare there. Elios is also one of the most notable beaches of the island, even though not many tourists know about it. This beach is located at some distance of the capital and popular resorts, so local people are main visitors of this coastal area. There are several secluded beaches on the northeast of the island, but it is possible to reach them by boat only.

This guide to iconic landmarks and sights of Skopelos Island is protected by the copyright law. You can re-publish this content with mandatory attribution: direct and active hyperlink to www.orangesmile.com.
Skopelos Island - guide chapters 1 2 3 4 5 6 7 8 9

Survived castles around Skopelos Island
♥   Castle 'Skiathos Castle' Skiathos, 17.3 km from the center. On the map

National and city parks around Skopelos Island
♥   National Park 'Ethniko Parko Schinia Marathona' , 112.3 km from the center. On the map

Search touristic sites on the map of Skopelos Island

Sightseeing in regions nearby Skopelos Island

Skiathos
The city also features a great choice of shops and shopping pavilions with Varsakis Gallery to be considered the most popular one. Here you can buy all sorts of jewelry, pottery, paintings and souvenirs. The best restaurant of the Greek cuisine is Amfiliki, and traditional European dishes are served in Bonaparte and Primavera. Once the dark falls to the city, night bars and ... Open »
Alonissos Island
An interesting object to visit is the information center MOM that tells visitors about the specific form of mammal, the monk seal, which is the principal inhabitant of the national park. The National Marine Park itself, of course, is the most visited and famous attraction of Alonissos. It was founded in 1992. A vast nature reserve occupies the eastern part of the territory of ... Open »
Skiathos Island
Evangelistria monastery is located near the capital. It was founded late in 18th century by Athos monk; it was situated in arduous mountainous area, which helped it to hide from pirates and conquerors. Today one of monastery buildings is occupied by a small historical museum. Another point of interest is the monastery of Panagia Kunistra named after island's holy patroness. The ... Open »
Sporades Island
Skopelos island is another place for fans of hiking. There they have an excellent chance to combine sightseeing and walking around scenic landscapes. Delphi mountain that is the highest point of the entire archipelago is located at Skopelos. Its flanks are covered with beautiful forests, which in turn hide ancient monasteries and churches; many wonderful legends are associated ... Open »
Evvoia Island
Elimnion area enjoys unchanged popularity among fans of hiking. There are many picturesque villages there, each of which has its own unique character. Thus, Kehries features a unique healing spring, which is associated with many beautiful legends. Skepasti is famous for its religious attractions, including the Agios Nikolaos Church. Its walls house the priceless relic, the ... Open »
Chalkida
Archaeological Museum, which is located in the central region of Chalkida, is surely one of those sights that cannot be missed. The collection of exhibits and artifacts present in the museum is mostly got from excavations in Evia. You can even look at the work of archaeologists and see the ruins of ancient cities if you visit the local archaeological complex. It is located a ... Open »

All about Skopelos Island, Greece - sightseeings, attractions, touristic spots, architecture, history, culture and cuisine. Prepare your trip together with OrangeSmile.com - find out the 'must see' things in Skopelos Island, which places to visit, which excursions to take, where the breathtaking views are waiting for you. Planning your trip with this travel guide will help your to get the most out of Skopelos Island in few days.