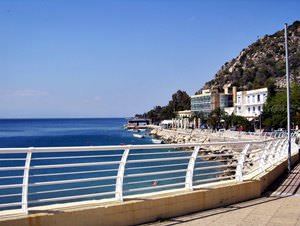 Loutraki is a popular thermal resort, however, besides healing springs and a beautiful beach, it is also interesting for its historical sights. On the outskirts of the city, there is an ancient sanctuary, and according to researchers, a large temple dedicated to the goddess Hera was once located in this place. This latter was built in the 9th century BC. Now the sanctuary is in the middle of an important archaeological area. Here you can see fragments of ancient columns discovered during excavations, an altar of the ancient temple, and other restored fragments of the ancient building. On the territory of the temple, they found an ancient furnace for clay burning, as well as over 200 glass vessels that were used for rituals. Artifacts discovered during the study of the area are currently stored in the local archaeological museum.
Advices to travellers: what you should know while being in Loutraki
1. Loutraki is a popular beach resort, so most tourists visit it in the summer months. It's recommended to book a hotel room for the summer in advance. 2. Active tourists who want to …

Open
In the vicinity of the city, there are many interesting Christian attractions. On the top of the Gerania Ridge Mountain is the ancient monastery Moni Osiou Patapiou. To climb to it, one will need to overcome a steep stairway of 144 steps. The history of the foundation of this monastery is pretty interesting. In the 13th century, a young hermit named Potapius settled in one of the caves on the side of the mountain. Later he founded a small cave church, which has subsequently existed for more than 600 years.
The relics of the hermit are now the main local treasure. Thousands of people come to worship them every year. The monastery one can see in this place today was founded relatively recently, in 1952. About 40 nuns live here today. Other religious sights have been preserved at the top of the mountain. Here you can visit ancient churches and admire frescoes created by local artists hundreds of years ago. Copyright www.orangesmile.com
Extraordinary weekend in Loutraki - unusual places, services and attractions for travel gourmet
…

Open
A short drive from the city, near the village of Isthmia, is the ancient Temple of Poseidon, another popular tourist attraction. It was built in the 7th century BC. Through the efforts of modern architects and researchers, it was possible to restore the ancient building partially. Today, visitors to the archaeological area can see majestic columns of the ancient temple, as well as the skillful floor mosaic, which is considered the most valuable discovery of these places. Not far from the ancient temple is a popular archaeological museum that has gathered a very interesting collection of finds. 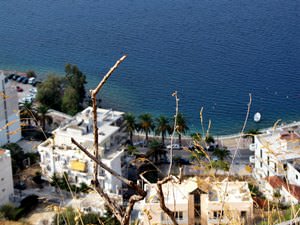 To the northwest of Loutraki is the beautiful Cape Malagavi, a very important place from a historical point of view. A lighthouse built on top of this cape in the 19th century has managed to survive to this day. This stretch of the coast is considered very difficult because of the rocks. Many ships and boats crashed here in the past. After the construction of the lighthouse, the number of shipwrecks was significantly reduced, but it was not possible to make this area completely safe for sailors.
Shopping in Loutraki - main shopping streets, outlets and boutiques
Loutraki cannot boast an abundance of large shopping malls, but the choice of small specialized stores is very broad here. Men will be interested in visiting Spoiled, a clothing store …

Open
The ancient lighthouse is considered a valuable architectural monument built with the use of light stone. The main remarkable feature of the building is the dome of a rich green color. These scenic places are popular with divers who come here to see old ships resting on the bottom. 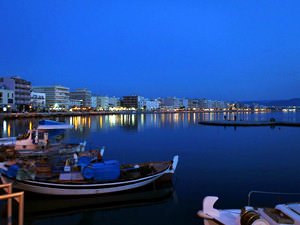 In Loutraki, fans of excursions can go on interesting field trips during which they can see the main archaeological and historical attractions of the region. The city is just half an hour drive from the ancient Greek city of Κόρινθος, the ruins of which are now of world significance. Here, researchers discovered an ancient acropolis, the ruins of the Temple of Aphrodite, and the ancient temple of Apollo erected more than 2.5 thousand years ago. One of the largest museums in Greece operates in this archaeological area. It contains the many archaeological finds from various regions of the country. A separate building of the cultural center is the museum of ancient ceramics where you can see old tableware, household items, and jewelry of the ancient Greeks.
Guide to Loutraki sightseeing - things to see and to visit
Loutraki is an amazing Greek city located on the coast of the Gulf of Corinth. It is always very sunny here, and tourists will find in Loutraki numerous beautiful beaches and clear water. As …

Open
Excursions to Μυκήνες are also popular among Loutraki guests. The entire territory of this ancient city is considered an open-air museum. Here you can see amazing antique and ancient Christian attractions, visit tombs of famous Greek rulers and numerous museums. In Mycenae, it was also possible to restore an ancient acropolis, and a collection of the local archaeological museum is considered one of the most valuable in the region. Visitors to Loutraki can choose from a variety of exciting tours.

In the section below, you can get one of our excursion, activities or city discovery tours over Loutraki and surroundings. Our website offers 10-30% lower ticket prices, when compared to the offline purchase on the spot.

This guide to cultural sights Loutraki is protected by the copyright law. You can re-publish this content with mandatory attribution: direct and active hyperlink to www.orangesmile.com.
Loutraki - guide chapters 1 2 3 4 5 6 7 8 9
Car rental on OrangeSmile.com

Photogallery of cultural heritage of Loutraki

Excursions over cultural sights of neighbours of Loutraki

Agistri Island
Megalochori or Milos, the capital of Agistri, is rich with various attractions. Many tourists are attracted by a large windmill, which can be found in the central part of the settlement. What's interesting, the mill is the only construction of this type on the Agistri and nearby islands. The windmill was built in 1812, and more than a century was used for its intended ... Open »
Aegina Island
One more popular attraction is the Column, which is the only evidence of the the Temple of Apollo, which hasn’t preserved to our days. The column is surrounded by the ruins of the walls. Some of them were raised approximately 5 thousand years ago. Later, Byzantine fortress was built here, it is ruined nowadays. Be sure to visit the Archaeological Museum of Aegina. There ... Open »
Athens
Athens is so rich in various attractions that choosing the most interesting among them is not so simple. You should definitely visit Tower of the Winds, which was built approximately two thousand years ago. This is one of the oldest meteorological sites of the world. The tower is built from marble, and its height reaches 12 meters, diameter - 8 meters. The top of the tower is ... Open »
Spetses Island
The troops of the rebels gave the fight to the Turkish squadron near the shores of Spetses in 1822. The battery located at Palio Limani played an important role in the battle. Guns are still in their places as they were 2 centuries ago. Not far from the battery you can find a chapel with frescos, illustrating the battle. There is also a bust of the Count Alexei Grigoryevich ... Open »
Hydra Island
Hydra is known as a source of inspiration among artists. There are many talented artists among locals. You can visit Melina Merkouri Hall and admire the works of Greek masters and know more about their life. It was named in honour of Greek actress and politician Melina Merkouri. There are exhibited various works of artists and you can also attend different master classes ... Open »
Evvoia Island
In Karystos city you may found a Venetian tower, which was built in the 13th century and called Bourtzi, and Venetian fort, called Castello Rosso. Mysterious Dragon-houses are also located here. These are ancient constructions, which origin and purpose still remain a secret for the historians. Huge 15-meters-high boards are perfectly adhere to each other without any ... Open »

Culture guide to Loutraki. Which fascinating sights to visit once you are in Loutraki: temples, churches, museums, theaters and castles. Recommendations (with addresses, phone numbers and links) on the places 'must visit' in Loutraki. Plan your own city excursion by using this page info!