Sightseeing in Heraklion - what to see. Complete travel guide 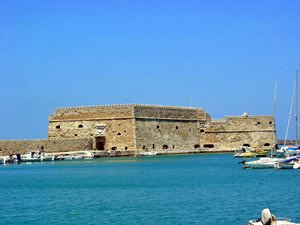 Heraklion is one of the largest cities of the country which history enumerates over two thousand years. The resort can accept visitors whole year long as water on some beaches of Heraklion stays warm even in winter. The most famous coasts are Stalis and Gouves. Multiple hotel complexes, entertainment centers and cleanest beaches are located near them. Recently an aqua park has been opened in this region. It has quickly grown popularity among small visitors and their parents.
Advices to travellers: what you should know while being in Heraklion
1. Motorists should remember that the local drivers are not distinguished by strict compliance with traffic regulations. Therefore, it’s important to be very careful on the roads of …

Open
From the historical point of view suburbs of Heraklion are the most interesting place. Palace of Knossos is the most famous building of this region. The palace is famous not only in Greece, but also abroad. This is an exceptionally beautiful building, halls and corridors of which keep the atmosphere of previous centuries. The gates of the fort are decorated with statues of winged lions and its towers are equipped with observation areas that are open for visitors every day. Near the fort are located a church and cathedral named in honor of St. Menas.
Art connoisseurs will be very excited to visit St. Catherine church as one of its halls is turned into Art Museum. Here you can see the works of a famous painter Michael Damaskinos. You can see priceless historical findings in Museum of History and Ethnographic that has recently moved into a new building. Copyright www.orangesmile.com
Extraordinary weekend in Heraklion - unusual places, services and attractions for travel gourmet
…

Open
People, who enjoy walking on picturesque forests and groves, will like the opportunity to attend an excursion to Agia Varvara village that is located high in mountains. The slope here is very gentle, so you don’t need any climbing skills to reach the village. Votomos village is famous for its caves and canyons. Here you will also see a manmade lake. 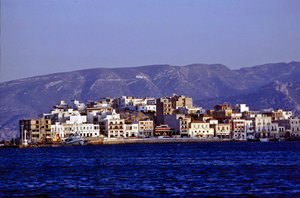 On one of the main squares of the city is the beautiful fountain Morosini. It is one of the main historical symbols of Heraklion. Its name was given in honor of the governor of Crete Francesco Morosini. In 1628, he ordered the construction of a water pipe in the city, which would allow water to be extracted from the slopes of Mount Juktas. To build the water pipeline, the governor employed famous engineers. Few years later, a gorgeous fountain appeared in the city, which is adorned with a sculptural composition of lions. For locals, it became the first permanent source of fresh water.
Shopping in Heraklion - main shopping streets, outlets and boutiques
Each trading street of Heraklion has its own characteristics. For the most fashionable brand things, you can go to Daedalou Street. Here, are concentrated the most fashionable boutiques, …

Open
The most visited cultural institution of Heraklion is the Archaeological Museum. It is one of the largest museums in Greece. Its halls contain unique archaeological discoveries brought from various regions of the country. The opening of the museum took place in 1883. Its collection so rapidly expanded that, at the beginning of the 20th century, next to the old building, new buildings were erected. Among the exhibits is worth noting the unique frescoes, restored during the study of ancient Greek palaces, as well as precious accessories that were created over 2,000 years ago. 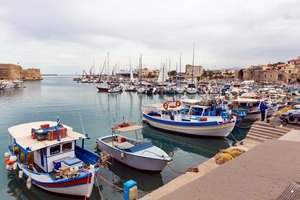 Fans of walks in historical places should definitely visit the Sea Fortress Kulesi, in the port region of ​​Heraklion. The first mention of this fortress dates back to the beginning of the 14th century, while the exact date of its construction remains unknown. At present, the entire territory of the ancient fortress is open to visitors. They can see the ancient living quarters, and the rooms in which weapons were stored. On the territory of the fortress, there is a mosque and an old prison, in which, prisoners were kept during the Middle Ages.
Cuisine of Heraklion for gourmet with top restaurants and cafe
For many years Ippokambos Ouzeri has remained a confident leader among the restaurants of Heraklion. This beautiful dining facility offers the most popular dishes from the local cuisine. …

Open
During the walk through Heraklion, you can see many interesting architectural structures. One of the most unusual is the building Loggia. It was built in the 17th century according to the design of the famous architect Francesco Morosini. Outwardly, this building resembles a traditional Venetian palace. Its architectural style is completely uncharacteristic for Heraklion and Greece as a whole. According to some information, this beautiful building was built in the likeness of the Basilica Palladiana, which is located in the Italian city of Vicenza. For many years this beautiful building was used for important political events and meetings.

This guide to iconic landmarks and sights of Heraklion is protected by the copyright law. You can re-publish this content with mandatory attribution: direct and active hyperlink to www.orangesmile.com.
Heraklion - guide chapters 1 2 3 4 5 6 7 8

City tours, excursions and tickets in Heraklion and surroundings

Survived castles around Heraklion
♥   Castle 'Fortifications of Heraklion' Heraklion, 0.1 km from the center. On the map

♥   Castle 'Koules Fortress' Heraklion, 1.3 km from the center. On the map

♥   Castle 'Spinalonga Castle' Spinalonga, 55 km from the center. On the map

Art galleries in Heraklion and around
♥   Art museum 'Heraklion Archaeological Museum' Heraklion, 0.7 km from the center. On the map

Search touristic sites on the map of Heraklion

Sightseeing in regions nearby Heraklion

Hersonissos
This town is home to approximately nine thousands of people, but they are almost invisible among tourists. Local people manage to create such an unobtrusive service that it seems everything is done by itself. The island is very popular among the British, Irish and Dutch tourists, so the majority of bars are made in the Dutch and Irish styles. In true, the town becomes alive ... Open »
Crete
The most famous places of interest of Crete are archeological excavations in Knossos, Fetos, Maglie, Gortina and so on; Venetian Castle Fortezza in Rethymno, Zeus Cave, Lassiti plateau, where you can try various wines and see the process of creation of olive oil. Don’t forget to visit mountain monastery built in XIV century and ceramic workshop; Samarian gorge, Spinalonga ... Open »
Agios Nikolaos
It is also worth taking a walk across the docking district, where are located several very good taverns and restaurants. This is the place where you can find best dishes made of fish and seafood. Travelers, who seek really unforgettable experience, may enjoy visiting Spinalonga Island. An ancient fort is located there almost in its pristine condition. This island is also ... Open »
Rethymno
The city features several museums, the most famous and widely popular of which is surely Archaeological Museum. It exhibits the collections that illustrate the development of the city at its various stages, starting from prehistory and until the 19th century. Your excursion to the Museum of History and Ethnography will be no less fascinating. It provides visitors with ... Open »
Chania
San Francisco Church is the main religious landmark of this place. Nowadays the church has been turned into Archaeological Museum. Just like many historic religious buildings of this town, the church was turned into a mosque during the Turkish conquest. Today bathing pools and a minaret remind of those times. You will also find several mansions and villas that once have ... Open »
Santorini
There are several small villages including the capital of Santorini, visiting which is truly mandatory. The first village is a small settlement named Oia. Here you will be able to see best and brightest examples of traditional island architecture. Then continue your travel by making a stop in the settlement named Akrotiri, where you will see houses built in 1500 BC that have ... Open »

All about Heraklion, Greece - sightseeings, attractions, touristic spots, architecture, history, culture and cuisine. Prepare your trip together with OrangeSmile.com - find out the 'must see' things in Heraklion, which places to visit, which excursions to take, where the breathtaking views are waiting for you. Planning your trip with this travel guide will help your to get the most out of Heraklion in few days.