Sightseeing in Naxos - what to see. Complete travel guide 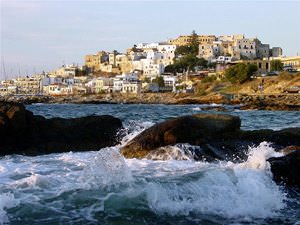 Ancient Greek city, Naxos is full of picturesque meadows and mountains. This place attracts visitors by its nature and splendor of ancient churches and castles. The city began to grow even in the prehistoric era, when it already was a famous cultural and shopping center. In 1537 Naxos became part of the Ottoman Empire; starting from 1829 the city is a part of Greece.
Shopping in Naxos - main shopping streets, outlets and boutiques
One of the main features of the island of Naxos is family shops, which have been selling certain goods for many years. Here you can visit wonderful bakeries, craft workshops, and art …

Open
One of the main attractions is Zas (Zeus) Mountain, on which, according to Greek mythology, lived the god Zeus. In close proximity is located another architectural place of interest connected with ancient myths of Greece. It is Apollo Temple, which building was finished in the 6th century BC. Today only a part of the foundation and gates have remained from that magnificent building.
Venetian fortress is the most famous architectural complex of Naxos. On its territory was built a Franciscan school that was later replaced by the school for nuns and Archaeological Museum. A beautiful cathedral is also located here. Don’t forget to visit laying statues named Kouroses that are very unusual and beautiful. The statue of Dionysus is ten meters tall, and a statue of Apollo reaches the height of 6 meters. Copyright www.orangesmile.com
Family holidays with kids in Naxos. How to entertain your child, things to show to children.
Naxos - the largest Cyclades island - is a fantastic place to spend a vacation. It's a great idea to visit the island with kids so that they can get an unforgettable experience. …

Open
Besides visiting historical places of interest the tourists who have come to Naxos are able to get magnificent rest on white sandy beaches. The biggest is the beach of the region is Agios Georgios, which length exceeds one kilometer. On these beaches you can also participate in numerous discos that are organized under the open sky. There are also night clubs on the beaches, the most popular of which is called "Bikini". When you are hungry, go a bit away from the beaches as best restaurants of the town are located there. You may enjoy such restaurants as "Notos", "Vegerra", "Ecstasy" and "Jam." If you are a shopping lover, go straight to the markets of Naxos. Here you will find large selection of jewelry, clothing and perfume, as well as great choice of products in food pavilions. 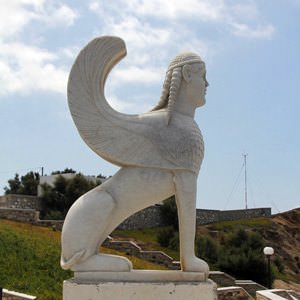 If you want to relax from bustling tourist areas, go on a trip to the village of Halki. Once upon a time, this city was one of the largest and richest on the island, but today it is home to only about 500 people. Extraordinary neoclassical buildings, several beautiful Byzantine-style churches, and other preserved historic buildings are reminiscent of old times. Many tourists come to this town for the sole purpose of visiting the historic Vallindras Distillery that was opened back in 1896. The Kitron Naxou Liquor has been produced here since its foundation.
Cuisine of Naxos for gourmet with top restaurants and cafe
Naxos restaurants will impress even the most sophisticated Greek cuisine admirers. Apart from traditional ethnic dishes the eating houses of the island offer plenty of special treats typical …

Open
The village of Filoti located in a very beautiful mountain area offers a variety of interesting attractions as well. The town's busiest place is the central square surrounded by magnificent age-old plane trees. The village is notable for its religious buildings, such as Church of Panagia Filotitissa dating back to 1718 and Holy Trinity Church that was erected more than 300 years ago. In the vicinity of the village, there is a great choice of interesting places for walking. 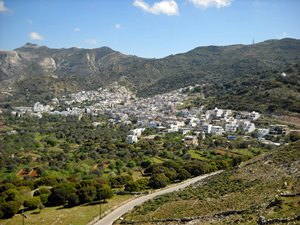 In the north-eastern part of the island, you'll find one of the oldest and most picturesque villages - Koronos. All its territory can be considered a unique architectural complex. The village has miniature houses with whitewashed walls that form a complex labyrinth of narrow and winding streets. The central Platsa square accommodates several traditional taverns. Also, guests of the village will have the opportunity to visit interesting handicraft shops.
Authentic traditions, festivals and lifestyle of Naxos inhabitants
The island of Naxos is one of the most interesting and distinctive regions of Greece. It is interesting not only for the variety of historical sights and natural beauties but also for its …

Open
A unique medieval atmosphere has been preserved in the ancient village of Apiranthos where you can also admire many centuries-old stone and marble buildings. Here you can find one of the island's oldest churches, Apiratitsissa Church, which was built in the middle of the 17th century. The village has its own Archaeological and Natural History museums. 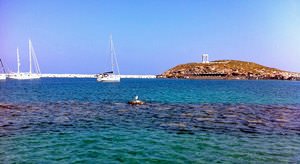 Fans of natural attractions will have the opportunity to visit Donousa Island located 16 km east of Naxos. Although this island cannot offer any tourist infrastructure, it is attractive for its deserted beaches as well as pristine natural beauties. Tourists can reach the island by ferry to visit its several miniature villages.

This guide to iconic landmarks and sights of Naxos is protected by the copyright law. You can re-publish this content with mandatory attribution: direct and active hyperlink to www.orangesmile.com.
Naxos - guide chapters 1 2 3 4 5 6 7 8

Survived castles around Naxos
♥   Castle 'Sanudo Tower' Naxos, 0.6 km from the center. On the map

♥   Castle 'Exomvourgo Fortress' Exomvourgo, 56.4 km from the center. On the map

Sights around Naxos from our guide 'Extreme places on Earth'

Distance from Naxos center - 68.2 km.
On the territory of the island there is an interesting Archaeological Museum, its location is a beautiful Venetian tower. Here, unique artifacts, found during the exploration of various areas of the island are presented. No less interesting object is the Monastery of the Virgin, which is located in the north-eastern part of the capital. It was founded in the 11th century. The monastery is located in a very inaccessible area - on the top of a cliff. Today, in the walls of the monastery valuable relics are kept, the age of some of them is more than 700 years. … Read further 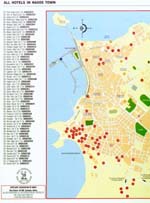 Search touristic sites on the map of Naxos

Sightseeing in regions nearby Naxos

Naxos
More recent architectural monuments include the Venetian fortress, where noble dukes once lived. Nearby is the Franciscan school building that is now converted into the Archaeological Museum and the medieval Catholic cathedral. Perhaps the most symbolic and mysterious attractions of the island are koursoses, ancient male statues; a lot of interesting and romantic legends are ... Open »
Paros
One of the oldest settlements of the island is Lefkes. Many buildings here were built in the 16th - 17th centuries. The most notable building of Lefkes is Agia Triada Church. This is a beautiful building made of white marble, which differs from the low buildings that surround it and resembles a magnificent palace. Speaking of beach vacations, it is worth mentioning the high ... Open »
Mykonos Island
Mykonos is the scenic Greek island. It's widely known as the beach resort center and a focus of many unique Antique landmarks. The island is very famous due to its night clubs, thus, the most of its visitors are young tourists. However, Mykonos has way more to offer than just nightlife. Exploration of island's landmarks can become an exciting adventure. Old windmills situated ... Open »
Mykonos City
Among the architectural sights of Mykonos we should mention several old churches, the building of which took place several centuries ago. There are also several museums here with one of them to be entirely devoted to archaeological finds. The island is a true paradise for fishing enthusiasts. The reason for this is in the fact Mykonos is surrounded by small uninhabited islands ... Open »
Ios Island
Travelers interested in modern art should visit Museum of Modern Arts located In Kolitsani. It retains an extensive collection of works by modern painters and also regularly hosts various cultural events. There's also a bunch of Classic landmarks on the island, including an amazing amphitheater. It’s visible from Chora hill and its ruins are excellent place to walk around for ... Open »
Tinos Island
Tinos Island is located in the northern part of the Cyclades, travelers know it as a popular beach destination. In addition to the great beaches, the island has a wide choice of decent historic monuments. Tinos, like many other Greek islands, is famous for its religious attractions. If foreign visitors come to the island primarily for beach holidays, the Greeks arrive here not ... Open »

All about Naxos, Greece - sightseeings, attractions, touristic spots, architecture, history, culture and cuisine. Prepare your trip together with OrangeSmile.com - find out the 'must see' things in Naxos, which places to visit, which excursions to take, where the breathtaking views are waiting for you. Planning your trip with this travel guide will help your to get the most out of Naxos in few days.