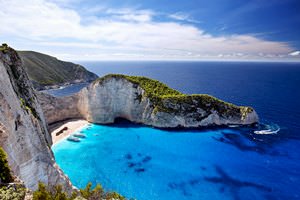 When you are talking to the local residents, remember that not all gestures here have a traditional meaning. For example, the palm that is spread out and directed right at the interlocutor is often used to indicate the person’s rejection of anything and, in fact, serves as a protective gesture, for the Greek will be a serious enough insult. It is also important to remember that if in the overwhelming majority of countries the nod of the head means consent with the speaker, in Greece it means denial. At the same time, the locals nod and clink their tongues, all showing a skeptical attitude.
Top hotels in Zakynthos Island for business trip or short vacation
There are few hundreds of accommodation places on Zakynthos and some are very popular among tourists. First of all, resort hotels are worth mentioning and Pantheon is one of the best of …

Open
During the conversation it is accepted to gesticulate a lot and the Greeks always greet familiar people with a kiss on both cheeks, regardless of the gender. The handshake is used only at the first meeting. Local people usually do not restrain their emotions too much and often raise their voices in the heat of the conversation. By the way, if you hear that a Greek person is scolding his country, government or officials – never support him. The residents of Zakynthos can be not at all pleased with their government, but they do not tolerate any criticism of Greece from a foreigner.
If you decided to have a snack and realized that there are only males are sitting in a small tavern, with newspapers, discussing something, then it's better to find another place for your meal. For a long time, the Greeks have been preferring to spend time discussing philosophy, politics, sports, and everything else in social places and are not too happy about the presence of strangers in such places. Despite the fact that local people like alcohol and consume it in large quantities, unworthy behavior when you are drunk is very much condemned here. Copyright www.orangesmile.com
Shopping in Zakynthos Island - main shopping streets, outlets and boutiques
Zakynthos is not the best place to buy brand clothes, shoes, and cosmetics. If you want, you can surely go to any shopping center and buy things you like, but the choice here is not too big, …

Open
If your friend from the island did not ask you to call him by his first name, then you should call him by his last name. Were you invited for a visit? Great! The locals are hospitable and try to do everything to make the guest feel comfortable in their home. But there is one thing – the invitation does not always mean a common meal. If you find yourself at the table with the Greeks, remember that the rules of etiquette are constantly violated here. They take bread with hands, pushing a neighbor or spilling something in the process of taking food is a common thing, and the rule that you shouldn’t talk when you’re eating is certainly not in honor here. Live laughter and talks do not stop for a minute, even during a business lunch. 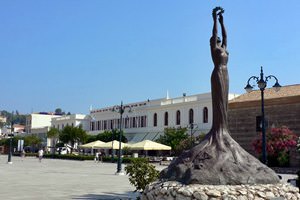 They like dancing here very much. In many taverns every evening you can see dancers in traditional costumes, performing to folk music. The most popular dances on the island are hasapiko, kochari, and sirtaki. The latter, by the way, appeared only in the second half of the 20th century and is not a national one. The majority of the islanders are Orthodox. The temples here are never empty, and church holidays are the reason for mass festivities for the Greeks of any age. On Easter, for example, thousands of candles are lit on St. Mark's Square, and many residents of the city take part in the ensuing battle on painted eggs.
Guide to Zakynthos Island sightseeing - things to see and to visit
Zakynthos is the well-known resort island that is a part of Ionian Islands. Lots of legends are associated with the island. According to the one of them, islanders were brave warriors and …

Open
The Day of St. Dionysius is celebrated on August 24 on a big scale. The festivities themselves begin a few days before this date and end with a grand procession and fireworks. In March, Zakynthos hosts the Carnival, a tribute to the Italian tradition. Medieval costumes, a show of trumpeters, music, and dancing – there’s definitely no boredom. In summer, the Ionio Festival of Classical Music is held in the open theater of Dermatousa. However, Zakynthos often hosts other music and folk festivals.

This guide to traditions and festivals in Zakynthos Island is protected by the copyright law. You can re-publish this content with mandatory attribution: direct and active hyperlink to www.orangesmile.com.
Zakynthos Island - guide chapters 1 2 3 4 5 6 7 8 9

Survived castles around Zakynthos Island
♥   Castle 'Chlemoutsi' northwestern Elis, 30.6 km from the center. On the map

Colors of Zakynthos Island in photos

Traditions and festivals in cities around Zakynthos Island

Zakynthos
Festivals and celebrations in the capital of Zakynthos Island have always surprised vacationers with their rich heritage. As Christianity is the primary religion in whole Greece, all religious holidays are widely celebrated in the region. Among the most notable holidays, it is important to mention Fota (Epiphany), Easter, the Assumption of the Mother of God, and Christmas. As ... Open »
Kefallonia
On any given day, guests of the island can personally observe one of these incredible wonders. To do this, you need to go to the foothills of Omalon where the ancient monastery of Holy Jerusalem is located. Next to this monastery is a small cave temple founded by the monk Gerasimos in the 16th century. Now the monastery is connected to the temple by a very narrow underground ... Open »
Ithaka Island
The most important thing for Greeks is to get pleasure from life. They will never work hard and get money at all costs. Locals can easily spend a large sum of money on an unnecessary useless thing or an evening in a tavern. Moreover, they don’t try to save money. They believe that there is no need for money if they don’t make you happy. Local inhabitants are great ... Open »
Lefkada
The festival is held in August, and beyond the immediate participants in this period the island is visited by a huge number of travelers. Entrance to the majority of cultural events is free; many concerts and performances are held in the open-air stage. During the festival, outstanding performers and artists are awarded various honors and awards, ceremonies are always very ... Open »
Kalamata
At the end of October, whole Greece, and Kalamata is no exception, celebrates the holiday called Ohi Day or a holiday dedicated to “No”. This holiday is dedicated to the events of October 28, 1940, when Mussolini made an ultimatum to Greece: either Greece capitulates and lets occupants enter its territory or Mussolini will declare war to the country. After a discussion, ... Open »
Loutraki
In recent years, the Loutraki Carnival has gained a grandiose scale - thousands of foreign visitors attend it every year. Famous musicians and artists take part in the festive concerts, which makes them even more interesting. For the rest of the year, Loutraki is characterized by a very calm and measured rhythm of life. But even in a normal period, travelers always have the ... Open »