Sightseeing in Rodos - what to see. Complete travel guide 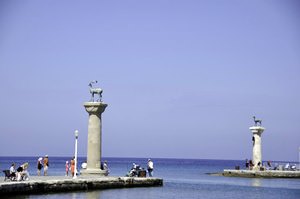 One of the most popular and world famous resorts, Rhodes has won love of vacationers due to its picturesque landscapes, the gentle sun and fascinating coastline. Here you will find luxury hotels, in which rest celebrities and nobles, and really solitary hotels, located in remote bays. In short, it’s a good place for recreation and entertainment that suits every taste and budget.
Excursion over cultural sights of Rodos - 'must visit' points of interest
The island of Rhodes is of great interest for touring and excursions fans as well as for historical sites exploration admirers. One of the main symbols of the scenic island is still the …

Open
Rich historical heritage is one of attractive features of the resort. Here have remained numerous monuments, each of which is unique and unforgettable. The main part of the attractions is located in the so-called Medieval town. Chora district is the location of several mosques, churches and homes. The most famous structures are Suleiman Mosque, Church of Chora Mother of God, the mosque of Sultan Mustafa, Muslim Library, St. George's Church, Church of Our Lady of Chora, and Church of St Paraskeva-Friday. If you decide to relax on the island during the warm season, you will be able to visit theater performances, which are conducted in one of the oldest theaters under the open sky. Shopping fans will also find entertainments in the old city. Visit Sokratus Street and you will find best gift shops and antique stores on the island. Art lovers should definitely visit the local Art Gallery, which exhibits collections of works of medieval and modern masters. You simply cannot fail to visit Archaeological Museum, which exhibits a magnificent statue of Aphrodite, as well as beautiful decorations and ritual accessories.
A trip to the Valley of Butterflies will become the most unusual and romantic excursion. The valley is also considered the most beautiful place of the island. Rich vegetation, a small river and numerous beautiful flying creatures – this is a true paradise on Earth that you will not want to leave. Copyright www.orangesmile.com
Your active city break in Rodos. Attractions, recreation and entertainment - best places to spend your day and night here
The island of Rhodes will turn to a perfect place for a family vacation. Visiting the island will turn of great pleasure to active leisure enthusiasts. Apart from scenic beaches and …

Open
One of the main historical symbols of the island is a beautiful Rhodian fortress. It was built in the 13th century. The archaeological studies have shown that it was built on the site of a ruined ancient acropolis. In the medieval time, this fortress was considered one of the most impregnable in the world. The length of the surrounding stone wall was about 4 km. It was a large-scale complex of dozens of buildings with different intended uses and has survived only partially. However, it is capable of leaving deep impressions with visitors. 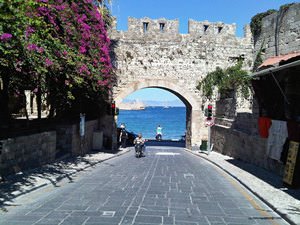 An important part of the medieval defensive system of Rhodes is the fort of St. Nicholas built in the 15th century and located on a tip of a rock breakwater. Since its foundation, the fort has been rebuilt numerous times, this allowed the historic building to be perfectly preserved to the present day. Now, it is available for guided tours. You can see an operational lighthouse and structures, whose age is more than 500 years.
Advices to travellers: what you should know while being in Rodos
1. The island of Rhodes features a well developed bus service. By public transport tourists will easily get to any part of the resort or to any landmark and sight of the island. The central …

Open
Some important archaeological areas exist on the island. The ancient city of Kamiros is one of the most interesting in this regard. It reached the prime of its existence in the 5th century BC. The major trading city flourished more than 800 years. In the 3rd century, a strong earthquake struck the island of Rhodes. As a result, most buildings were completely destroyed. Now, only the fragments of the foundations of ancient buildings, constructed over 2000 years ago, are available to visitors. 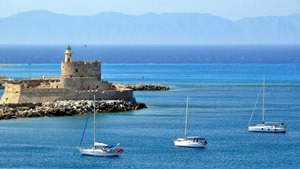 Mount Filerimos is a wonderful place for long walks and sightseeing tours. Unique antique monuments and religious buildings adorn its top. Here, you'll see the ruins of ancient Greek temples dedicated to Athena and Zeus, and admire beautiful Christian cathedrals that were built in the late medieval period. The preserved monastery of the Mother of God with its miraculous icons is located there, as well. The monastery was founded in the 16th century. The top of the mountain opens a wonderful view of the nearby cities.
Best beaches and recreation areas around Rodos
Rodos coastline is more than 250 kilometers long making it a difficult task to find the best beach on the island. There are sand, pebble-stone and rocky areas, but some of them are more …

Open
The most beautiful place on the island is Rodini Park, located in its very center. According to historical data, the park was founded in Roman times. Ancient aqueducts have survived on its territory, and the main value is represented by centuries-old trees.

This guide to iconic landmarks and sights of Rodos is protected by the copyright law. You can re-publish this content with mandatory attribution: direct and active hyperlink to www.orangesmile.com.
Rodos - guide chapters 1 2 3 4 5 6 7 8 9

City tours, excursions and tickets in Rodos and surroundings

Survived castles around Rodos
♥   Castle 'Lindos Castle' Acropolis of Lindos, 12.9 km from the center. On the map

♥   Castle 'Monolithos Castle' Monolithos, 29.5 km from the center. On the map

♥   Castle 'Fortifications of Rhodes' Rhodes, 30.4 km from the center. On the map

♥   Castle 'Palace of the Grand Master of the Knights of Rhodes' Rhodes, 31.8 km from the center. On the map

Art galleries in Rodos and around
♥   Art museum 'Archaeological Museum of Rhodes' Rhodes, 31.9 km from the center. On the map

Sights around Rodos from our guide 'Extreme places on Earth' 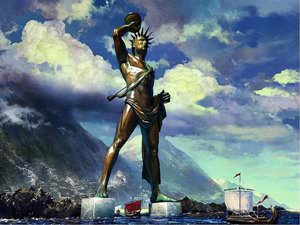 Distance from Rodos center - 32.5 km.
A few years ago, unique designs for restoration of an antique statue were presented to the world. In 2008, the most interesting project of the lighting installation was shown. In 2015, a group of engineers decided to erect a 150 meters high monument. According to the organizers of the project, a leisure complex will be located inside a huge statue. There's another interesting fact about the history of this ancient statue. It's suggested that one of the most famous sculptures of today, the Statue of Liberty, was created in the image of the Colossus of Rhodes. … Read further 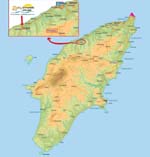 Search touristic sites on the map of Rodos

Sightseeing in regions nearby Rodos

Faliraki
Faliraki carefully cherishes its ancient monuments. The building of many of them took place in the 18 - 19 centuries. Among the attractions of this place we should definitely mention Church of St. Nektarios - one of the largest buildings of the village. Central Waterfront is one of the most picturesque districts in the town. Here you will find all sorts of restaurants, bars ... Open »
Tilos Island
The capital of the island is famous for its unique religious landmarks. The Monastery of St Anthony storing a priceless collection of ancient artifacts, as well as the St. Panteleimon Monastery are attention worth. The latter is now converted into a hotel. One of the most spectacular historic buildings in the capital houses a museum that introduces history and culture of the ... Open »
Marmaris
Since ancient days the city of Cnidus was located in Marmaris. That place was founded in the IV century BC. Today this place is widely visited by tourists who come to see the ruins of the temple of Aphrodite, walk among the remaining foundations of old houses and stands of ancient amphitheaters. Natural landmarks of this place are Millet and Ephesus, where St. John the ... Open »
Kos
The castle of loannite Knights built in the 15th century is one of those facilities. Stones and marble left from the houses destroyed by the earthquake were used during the building of the fort. Palm Avenue is one more interesting place recommended for visiting. Here you will see a huge sycamore. According to one of the theories, the tree was planted by Hippocrates. Under the ... Open »
Karpathos Island
One of the most unusual sights of the island is the Basilica of St. Fotini. It was discovered by archaeologists in 1972; according to scientists, the Basilica is about 1,500 years old; the amazing building was restored by efforts of modern architects. Its snow-white building is one of the most beautiful on the island. Fans of natural attractions will be fond of walking around ... Open »
Kos Island
Another interesting landmark is the Asklepion. That’s a large healthcare complex built back in 4th century DC. Historical records say that there were more than 300 of such complexes in Greece, but only a few of them have survived until these days. Asklepion is a massive architectural complex with ruins of the temple of Asclepius and Appolo temple, antique medical school, ... Open »

All about Rodos, Greece - sightseeings, attractions, touristic spots, architecture, history, culture and cuisine. Prepare your trip together with OrangeSmile.com - find out the 'must see' things in Rodos, which places to visit, which excursions to take, where the breathtaking views are waiting for you. Planning your trip with this travel guide will help your to get the most out of Rodos in few days.