Sightseeing in Corfu island - what to see. Complete travel guide 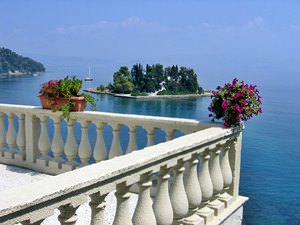 The Emerald Isle of Corfu has long been known for its luxury resorts. It owes its unofficial name to its vast cypress forest, beautiful lemon trees and numerous orange trees. This charming island is famous not only due to its natural attractions, as it has numerous historical monuments that will certainly impress fans of excursions.
Your active city break in Corfu island. Attractions, recreation and entertainment - best places to spend your day and night here
There are a lot of opportunities to vary leisure activities on Corfu and not just spend time swimming. If you like diving, here, in the northern part of the island, you can be trained and …

fortress is a permanent symbol of Corfu; it's a bright monument of the Byzantine Empire. The castle was never captured. It is located on a high hill and is visible from different corners of the island. The fortress is a large-scale architectural complex surrounded by the centuries-old forest. The highest and most beautiful building of architectural complex is the Church of the Archangel Michael.
History lovers will enjoy visiting the ancient town of Kerkira

. It has being under the control of the Venetian Republic for more than four centuries. One of the most beautiful structures of the town is St. Spyridon church. Its construction was completed in 1589. The walls of the church house priceless religious artifact, the relics of the patron saint of the city, St. Spyridon. For many years, the church remained an important center of pilgrimage; people brought a huge amount of generous offerings there. Today, halls of the church are decorated with precious accessories, some of which were donated to the church by members of the royal family. Copyright www.orangesmile.com
Best beaches and recreation areas around Corfu island
Corfu won't disappoint tourists who expect to devote their holiday to beach activities. The northern part of the island is the most attractive and popular among tourists. It can boast Roda …

Open
In the immediate vicinity of Corfu there is a priceless landmark, Achillion Palace

. It was built in the second half of the 19th century for the Austrian empress. The palace has managed to retain a significant portion of its original decoration. Every element in the interior is a priceless museum piece. Spacious rooms are decorated with luxurious furniture, tapestries and paintings by great masters. Not only the palace, but its neighborhood is notable too. The lush garden features exotic plants, landscape compositions and sculptures in antique style. 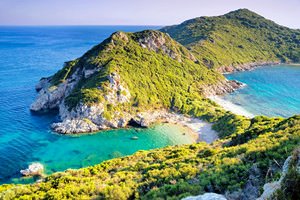 Mount Pantokrator certainly deserves attention among natural attractions. It is the highest point of the island, rising to 906 meters. A narrow winding trail goes to the top and passes through incredibly picturesque places. The mountain top offers spectacular panoramic views over remote areas of the island, as well as the coastline of Italy.
Top hotels in Corfu island for business trip or short vacation
Corfu is ready to offer its guests a decent selection of upscale hotels. One of the luxurious mansions of the 17th century now houses the luxury hotel Cavalieri; it is in the island's …

Open
One of the most unusual Corfu attractions is Monastery Vlacherna

. It can be found on a miniature island connected with Corfu by a footbridge. The building occupies almost the entire island. The snowwhite monastery building surrounded by sky-blue waters looks just amazing. Another ancient monastery is on the Pontikonisi

. The island is entirely covered with dense thickets of trees, among which the 11th century Pantokrator

monastery can be found. The monastery is situated on the highest point of the island; a white narrow staircase, which resembles a mouse tail from afar, goes to the building. That's why Pontikonisi is often called 'the mouse island.'

The majority of travelers visit Corfu Island with one desire – to relax on the picturesque beaches. The majority of coastal areas with official public beaches are distinguished by excellent ecological indexes. Several Corfu beaches have a Blue flag label. The island has an unusual location – its shores are washed by two different seas - the Ionian Sea and the Adriatic Sea. Sand and pebble beaches are the most typical for this area. Travelers who prefer warm water will be delighted with the beaches on the eastern part of the island. However, these beaches are usually quite crowded so vacationers in search of peaceful and private atmosphere, as a rule, like beaches on the western part of the island more.
Shopping in Corfu island - main shopping streets, outlets and boutiques
On Corfu, you can buy comfortable, practical and affordable clothes from well-known brands as well as local goods and souvenirs. The boutiques are located in Kerkira. Here you should pay …

Open
Corfu is a paradise for everyone who is keen on diving. The island has great conditions for diving and snorkeling. In total, there are more than 30 diving sites near the island, so both beginners and experienced divers will easily find a suitable area. Beautiful coral reefs, underwater caves, and rocks – the underwater landscape of this region is beautiful and diverse. Experienced divers also like the nearby island of Kolovri, the underwater part of which has a very complicated structure.

This guide to iconic landmarks and sights of Corfu island is protected by the copyright law. You can re-publish this content with mandatory attribution: direct and active hyperlink to www.orangesmile.com.
Corfu island - guide chapters 1 2 3 4 5 6 7 8 9

City tours, excursions and tickets in Corfu island and surroundings

Survived castles around Corfu island
♥   Castle 'New Fortress' Corfu, 5.2 km from the center. On the map

♥   Castle 'Gardiki Castle' southwestern Corfu, 12.5 km from the center. On the map

National and city parks around Corfu island
♥   National Park 'Ethniko Parko Pindou' , 99.6 km from the center. On the map

Search touristic sites on the map of Corfu island

Sightseeing in regions nearby Corfu island

Corfu
The old part of the city reminds old Venice. It was built in the 14th century, so here you can see rows of living houses decorated with red tiled roofs. Liston Street is the central street of this place. This street is a twin one to Rue de Rivoli in Paris. Here you will see the same arched gallery with numerous restaurants, bars and café. Visiting Archeology Museum will also ... Open »
Igoumenitsa
Igoumenitsa is a small town located among green hills and mountains. It serves as a so called binding link between Italy and Greece and this fact traditionally attracts multiple tourists. Here travellers get an opportunity to visit a neighbor island Corfu, see sights of Easter Island and other interesting places. Igoumenitsa acts as a starting point for many excursion routes, ... Open »
Parga
Valtos is a wonderful choice for traditional beach recreation and fans of various active sports. Everyone is welcome to try water skiing, windsurfing, or try diving and make an unforgettable journey to the depths of the sea. Are you a newbie in scuba diving? No problem, you can always find an experienced coach who will show you how to dive and then make an underwater ride ... Open »
Lefkada
Among the sights of this place is the bridge that connects the island with the mainland. Near the bridge you will see ruins of the Saint Maura Fortress. Lefkada town is located approximately one kilometer away from the bridge. In this town you can visit churches of St. Dmitri, St. Minas, St. John of Anjou, and St. Spiridion. The church of Pantokrator has a graveyard, where ... Open »
Otranto
The Aragonese Castle has an irregular pentagon shape with circular towers on the edges. Each of the towers has its name: Torre Alfonsina is the name of the first tower, the second tower is Torre Ippolita, and Torre Duchessa is the third one. A bastion called Punta di Diamante is situated in the fourth corner. The castle was thoroughly restored in 1647. The main tower of the ... Open »
Ithaka Island
There are several amazing museums on the island, the most visited among them is the Museum of Stavros. Bronze tripods and clay masks, which, according to one version, once belonged to Odysseus, are represented there. The museum's collection is incredibly extensive and interesting, and wonderful story is associated with every exhibit. There is a high hill nearby, where, ... Open »

All about Corfu island, Greece - sightseeings, attractions, touristic spots, architecture, history, culture and cuisine. Prepare your trip together with OrangeSmile.com - find out the 'must see' things in Corfu island, which places to visit, which excursions to take, where the breathtaking views are waiting for you. Planning your trip with this travel guide will help your to get the most out of Corfu island in few days.