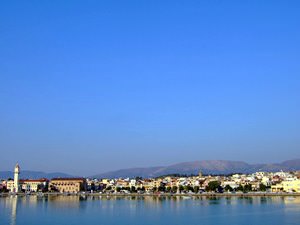 Zakynthos is a recognized world-famous beach resort with lots of comfortable coast areas spread all over the island. Gerakas

sand beach is widely regarded as one of the best on Zakynthos. It has excellent infrastructure and offers a wide choice of charming restaurants. The only disadvantage of this beach is an absence of some amusement rides. That’s because of Caretta turtles inhabiting this picturesque area. Some of the popular beach entertainment options are banned to keep these creatures safe.
Guide to Zakynthos Island sightseeing - things to see and to visit
Zakynthos is the well-known resort island that is a part of Ionian Islands. Lots of legends are associated with the island. According to the one of them, islanders were brave warriors and …

resort is one of them. It’s very popular among fans of beach leisure and nightlife for its golden sand, sky-blue waters and a huge choice of entertainment places. Popular restaurants, bars and night clubs create lively atmosphere during 24 hours a day. Laganos beach is over 10 kilometers long and is one of the biggest on Zakynthos.
Those who prefer to rest in calm ambience should visit Navagio beach. It's a pretty hard-to-reach beach accessible with water transport only. The place is known for very harmonious and peaceful atmosphere, but it's never dead-empty. Navagio beach is often found in tourist booklets and postcards, as it is well-known and popular among travelers. Water at the beach is considered healing thanks to a number of underground springs enriching it with healthful elements. The sunken smuggler's ship is the most important attraction of Navagio. Copyright www.orangesmile.com
Family holidays with kids in Zakynthos Island. How to entertain your child, things to show to children.
Zakynthos is just great for a vacation with children. There are many beautiful beaches with a gentle descent, and unusual natural objects, historical monuments, and attractions for children …

is the most popular beach in the north of Zakynthos. It’s very flat and covered with fine golden sand making it an excellent choice for rest with the kids. It's also a very comfortable place due to various shops and dinning places located nearby. Sea trips are arranged there on daily basis; there is also a number of beach and sports equipment rental services. 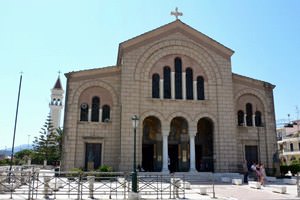 is also well-known due to its charming beaches and nearest luxurious resort hotels. Relatively narrow coast is probably the only drawback of Tsivili, but that can’t offset its advantages. Vasilikos

is among the most quiet and scenic resort villages of the island. It's located away from the busy resort center and the island’s capital. There's a number of tiny beaches located nearby along with lots of amazing places to walk around.
Cuisine of Zakynthos Island for gourmet with top restaurants and cafe
The island's cuisine absorbed all the best traditions of the Greek culinary. One of the most important ingredients in almost any dish is olive oil. The Islanders also like to use tomatoes, …

island is an excellent choice for tourists eager to visit unusual places. This is a private island connected with Zakynthos via walking bridge. For a small fee everyone can get access to this quiet scenic beach. Agios Nikolaos

beach is named after the old church situated nearby; it’s a very symbolic place. It's highly recommended to romantic natures and those fond of history of past ages.

This guide to top beaches in Zakynthos Island is protected by the copyright law. You can re-publish this content with mandatory attribution: direct and active hyperlink to www.orangesmile.com.
Zakynthos Island - guide chapters 1 2 3 4 5 6 7 8 9

Barzani natural reserve is in the north of the country, close to the border with Albania. That’s a real ecological museum. The park artificially created a population of different species of wild animals. Today, serious measures are being taken to maintain a decent environment for their existence. There are such animals as the deer, the red deer, the Kri-Kri goat, and the European roe deer. Not far from this place, there is another national park, Pindus. According to legends, the Pindus were inhabited by the Muses of Apollo. Various species of coniferous trees grow and a large number of different birds live in the park. … Open

Search for useful vacation services on the Zakynthos Island map

Top beaches and recreation areas in the region of Zakynthos Island

Kefallonia
Vacation at the picturesque island is impossible without beaches. Kefallonia is extremely popular among fans of water sports and active leisure. Makrys Gialos is probably the calmest and the most spectacular beach on the island. This is a vast coast covered with dark sand, while water at the beach is intriguing and almost unnaturally blue in color. There's no equipment at all ... Open »
Ithaka Island
The sandy Mnimata Beach is well equipped; there you can comfortably relax all day long. You can reach it from the capital on foot or by boat from the port area. To the north-east of the capital there is the charming Gidaki Beach. Quiet and secluded, that’s the best place to relax in tranquil surroundings. Despite the fact that not more than 5 kilometers share the port area of ... Open »
Lefkada
Windsurfers prefer to rest solely in Vasiliki. The beach here is shallow, and therefore, conditions for training are the most comfortable. You can find beach equipment rentals, surf school and dining places at the coast. Vasiliki can boast one of the most populous and crowded beaches of the island. Surroundings of the resort are equally attractive; they feature beautiful ... Open »
Spetses Island
First-class service makes the nearby gravel and sand Caique beach popular. It’s well equipped, so you can find nice sun beds and very amazing thatched umbrellas set on the coast. The cozy tavern, where you can taste a lot of the original fish dishes, is available to visitors from early morning until late in the evening. One of the most picturesque and popular is Agia ... Open »
Corfu island
The sandy beach of St. Stephen Avlioton is popular too. It appeals to fans of various activities; comfortable areas for sunbathing, children's playgrounds and sports courses are found there. The beach can boast several excellent taverns and restaurants; top rated hotels and apartments are near too. Travelers staying on vacation with children also have to pay attention to the ... Open »
Agistri Island
Agistri Island is often called the gem of Greece thanks to its beautiful beaches. This secluded island surrounded by world-renowned resorts is literally created for beach holidays and enjoying nature. One of the most picturesque places on the island is secluded Dragonera Cove. The local pebble beach will surprise with its unusual appearance; its water is incredibly clear. ... Open »

Travel guide to best natural recreation areas in Zakynthos Island for a quiet and secluded summer vacation. Fascinating hidden beaches, amazing bay and coves to sunbathe and swim in the gentle waters of the resorts of Zakynthos Island.