Sightseeing in Thessalia Region - what to see. Complete travel guide 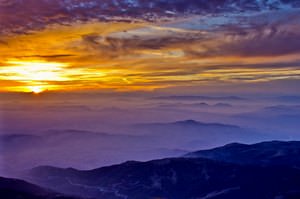 Thessalia is one of the most interesting and harmonious regions of Greece. It is where the legendary Mount Olympus, hundreds of unique historical sites and one of the best beaches in the country can be found. The region is situated off the coast of the Aegean Sea. Sporades archipelago with its popular beach resorts and wildlife sanctuaries is also a part of Thessalia.
Advices to travellers: what you should know while being in Thessalia Region
1. To begin with, Thessaly is not located in the tropics, there is the change of seasons in this region, in summer the temperature is about 30 degrees Celsius, and in winter, it is about 10 …

Open
The capital of the region is the city of Larissa

. According to historical data, it was the birthplace of Hippocrates. An ancient city with amazing rich history has preserved a lot of interesting monuments of past years; you can see the gorgeous mansions and villas in any part of the city. One of the main places of attraction is Frourio Hill, where scientists have once discovered the ruins of the ancient acropolis. Hillside is also of great interest from a historical point of view. Holidaymakers will be able to see the ruins of ancient theaters, as well as many natural attractions, while walking there.
Lots of interesting myths and legends are associated with Volos

, whose history goes back thousands of years. This picturesque port town has several symbols - Agios Konstantinos

and Agios Nikolaos; they will certainly surprise visitors with their incomparable appearance and rich decoration. Archaeological Museum, which in addition to priceless archaeological finds has a rich collection of paintings, is situated in the center of town. Copyright www.orangesmile.com
Best beaches and recreation areas around Thessalia Region
The most popular beaches of Thessalia are concentrated in Volos Prefecture, as well as in the capital region and its immediate environs. Within the city of Agria the rocky beach of Barba …

Open
Fans of natural attractions are attracted by the popular Pilio

peninsula. According to amazing local myths and legends, centaurs have lived there thousands of years ago. Over the years these places haven’t lost their natural splendor at all. Almost the entire peninsula is covered by mountains, the slopes of which are covered with hundreds of hiking trails. 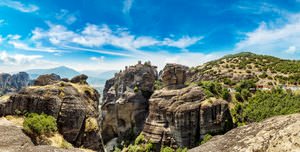 Tourists, which aren’t fond of hiking, are offered to ride to the most picturesque places by Yasonos train, which was first launched in 1895. In addition to its amazing natural beauty, Pilo Peninsula is famous for its picturesque villages, each of which is a storehouse of historical and architectural attractions.
Top hotels in Thessalia Region for business trip or short vacation
Thessalia is famous for various accommodation places of different categories. Historic hotels are widespread, one of the most famous among them is located in Portaria. We are talking about a …

Open
The Meteors: monasteries built on rocky peaks are the most famous landmarks of these places. Construction of the complex has begun in the 15th century and lasted more than 200 years; monastery cells and associated buildings have been cut in the rocks. The look of the monastery complemented by the complex system of suspension bridges is just unique; it can be reached by the stairs carved in the rock. 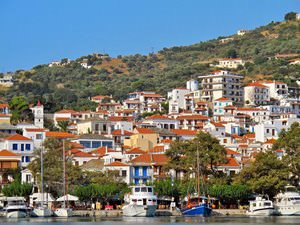 After examining the mainland region, you have to pay attention to the isles. Picturesque Sporades

islands are famous due to variety of natural attractions, as each of them has unique reserves. Alonnisos and Skopelos make the best fit for hiking and admiring nature. You could combine trips to historical sites and exploring natural attractions on Skiathos

; it is famous for its lively atmosphere and a wide selection of first-class resorts. For many years, Thessalia has remained under scrutiny of archaeologists. Many historical areas are now available for public access. Travelers will have an opportunity to admire the ruins of castles and amphitheaters, temples and ancient thermae. Museums of Thessalia represent unique historical artifacts and art objects.
Shopping in Thessalia Region - main shopping streets, outlets and boutiques
In truth, Thessaly is not a very suitable place for shopping. An exception to this can be your purpose to buy a fur coat. If it is exactly your case, then it makes sense and you can safely …

Open
The picturesque region of Thessalia has many interesting peculiarities. For hundreds of years, it was nearly completely isolated not only from other countries but also from other regions of Greece. Such isolation has made it possible to keep interesting cultural traditions and unique heritage in Thessalia. In recent years, tourism has been rapidly developing in the region, but agriculture hasn’t lost its importance for local people. 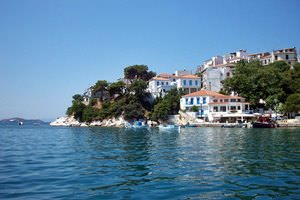 Vegetables and grain are still popular agricultural cultures in Thessalia. There are also plantations with medical herbs. The island is also a great place to see unique Skyros horses. Breeding these horses is also an important occupation of local people. These tiny horses look somewhat similar to ponies. Excursions to horse farms are very popular with tourists, especially tourists with children. Quite an interesting fact – it is not clearly known how these horses appeared on the island.

This guide to iconic landmarks and sights of Thessalia Region is protected by the copyright law. You can re-publish this content with mandatory attribution: direct and active hyperlink to www.orangesmile.com.
Thessalia Region - guide chapters 1 2 3 4 5 6 7 8 9 10

City tours, excursions and tickets in Thessalia Region and surroundings

Survived castles around Thessalia Region
♥   Castle 'Platamon Castle' Platamon, 43.1 km from the center. On the map

National and city parks around Thessalia Region
♥   World Heritage Site 'Meteora' , 82.1 km from the center. On the map

Search touristic sites on the map of Thessalia Region

Sightseeing in regions nearby Thessalia Region

Larisa
If you make a walk on the city, you will understand that Larissa is truly a city of fountains – there are really many of them here. Every fountain has its individual theme and sculpture. There are also many squares in Larissa and each one of them has an interesting name (Central, National, Jews, Post and so on). Among the most notable sights of Larissa are the ancient ... Open »
Skiathos Island
Bourtzi fortress is the historical landmark of earlier times. It occupies the entire small island located next to the bay. This Venetian fortress used to protect city for years; however, it has survived until nowadays in excellent condition. Now it’s converted into summer stock. Few years ago, it became a venue for annual Aegean Festival dedicated to national traditions and ... Open »
Skiathos
The city also features a great choice of shops and shopping pavilions with Varsakis Gallery to be considered the most popular one. Here you can buy all sorts of jewelry, pottery, paintings and souvenirs. The best restaurant of the Greek cuisine is Amfiliki, and traditional European dishes are served in Bonaparte and Primavera. Once the dark falls to the city, night bars and ... Open »
Skopelos Island
As noted above, the number of religious sites on the island of Skopelos is incredibly large. In the capital, there is one of the most beautiful monasteries, Zoodochos Pigi, located on the coast. That’s a classic architectural monument of local style. Spacious stone terraces surrounding the monastery would be great for admiring the sea views. One of the most popular ... Open »
Thessaloniki
This Greek resort is famous not only by its magnificent beaches, but also by rich historical heritage. The history of the city enumerates more than 23 centuries, and every era has added some iconic and remarkable places to the city. The most popular excursion in Thessaloniki is, without a doubt, a trip to White Tower built in the middle of the 15th century. You should ... Open »
Alonissos Island
The must visit site is Kunuli Mountain that is the highest point of the island. The mountain is 476 meters high and it doesn't require any special training to climb it. Participants of the excursion will be richly rewarded for their patience, as the entire territory of the island is seen from the mountain top. Nature lovers can also go hiking to Vouno Mountain. The second ... Open »

All about Thessalia Region, Greece - sightseeings, attractions, touristic spots, architecture, history, culture and cuisine. Prepare your trip together with OrangeSmile.com - find out the 'must see' things in Thessalia Region, which places to visit, which excursions to take, where the breathtaking views are waiting for you. Planning your trip with this travel guide will help your to get the most out of Thessalia Region in few days.