Sightseeing in Mykonos Island - what to see. Complete travel guide 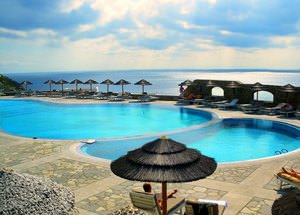 Mykonos is the scenic Greek island. It's widely known as the beach resort center and a focus of many unique Antique landmarks. The island is very famous due to its night clubs, thus, the most of its visitors are young tourists. However, Mykonos has way more to offer than just nightlife. Exploration of island's landmarks can become an exciting adventure.
Best beaches and recreation areas around Mykonos Island
Wonderful beaches of Mykonos are among its most appealing features. There are over 30 coastal areas available for tourists; the most popular is Platis Yalos beach. This vast golden sand …

Open
Old windmills situated around the capital represent one of the Mykonos symbols. Travelers going to stay in this area for longer have to consider that one of the mills was turned into a hotel. Among religious landmarks, the Holy Mother Paraportiani church is notable. This wonderful snow-white building built in very unusual style has survived until this day only partially. It's worth mentioning that this religious landmark is the distinctive feature of Mykonos. Locals say that there are 365 churches and cathedrals on the island, as much as days in the year. It's almost impossible to make exact count of religious landmarks of various ages. Yet you can find them in nearly every small settlement of the island. St.Nicholas and St. Helena churches, as well as Hall Sunday church are among the most beautiful religious landmarks of Mykonos.
Virgin Mary monastery is the popular site of many excursions. It houses a vast collection of priceless religious and arts artifacts matching the biggest world's museums. There are unique Byzantine Empire icons, religious attributes and relics brought to the monastery from all over the world. Copyright www.orangesmile.com
Top hotels in Mykonos Island for business trip or short vacation
Hotels of Mykonos are full of national charm and are excellent choice for family vacation. Most of the popular inns and hotels are situated in the island capital, the city of Mykonos. … 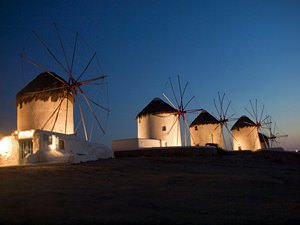 There's also a number of interesting museums on the island. Archeological museum is one of the most popular among them. It's located near Mykonos port area and houses an impressive collection of ancient sculptures, vessels and religious artifacts. The collection is being updated regularly; some of objects are few thousand years old. Another interesting site is the Folklore museum. It introduces cultural traditions of locals to curious tourists. National costumes, musical instruments, antique furniture, art and everyday object are among its treasures.
Shopping in Mykonos Island - main shopping streets, outlets and boutiques
Olive oil is a truly Greek product. Greeks produce high-quality oil and local cooks add it to almost all of the dishes. Oil is sold in 1-litre bottles, 3 or 5-litre jerrycans and souvenir …

Open
Agricultural museum is a huge open air complex. There's even an old windmill at the area. Farming was always among the most important crafts of islanders, so museum can boast a collection of ancient tools and instruments. Some of them are completely unknown to foreigners. Among architectural landmarks, the beautiful Lena House mansion built in 19th century is notable. It has managed to keep its original interior. The mansion houses a priceless collection of antique furniture and arts open for public. 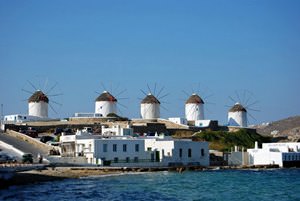 Mykonos is famous for its excellent beaches, many of which have become famous far beyond the borders of the island. It is particularly important to mention Paradise Beach that is considered a nudist one. In recent years, numerous cafes, restaurants, and nightclubs appeared in this part of the island. When it is getting dark, loud parties begin on Paradise. Some time ago, large screens that broadcast MTV appeared on the beach, so in the evening the coastline resembles a giant open-air disco.
Family holidays with kids in Mykonos Island. How to entertain your child, things to show to children.
Mykonos is an island, which is visited by celebrities, businessmen and politicians. But the island is not only popular with its visitors. Here are a lot of natural and historical …

Open
Young tourists also enjoy relaxing on Paraga Beach. It is a large sandy beach suitable for different travelers. The southern part of the beach is calm and is almost always not crowded, while the northern part of the beach has a more developed infrastructure. During the peak season, loud and energetic parties are typical for this beach. Platis Gialos is the most developed and prestigious beach of the region. There are several high-class hotels and restaurants near it. This beach is suitable for travelers who prefer the most comfortable are interesting places. Vacationers are welcome to try different types of entertainment, from sports competitions to unusual and interesting diving safaris.

This guide to iconic landmarks and sights of Mykonos Island is protected by the copyright law. You can re-publish this content with mandatory attribution: direct and active hyperlink to www.orangesmile.com.
Mykonos Island - guide chapters 1 2 3 4 5 6 7 8 9

Survived castles around Mykonos Island
♥   Castle 'Exomvourgo Fortress' Exomvourgo, 22.6 km from the center. On the map

Art galleries in Mykonos Island and around
♥   Art museum 'Archaeological Museum of Delos' Delos, 9.9 km from the center. On the map

Search touristic sites on the map of Mykonos Island

Sightseeing in regions nearby Mykonos Island

Mykonos City
The island is full of contrasts as here you can see living houses painted in bright colors just next to modern buildings. While walking on the streets of Mykonos, you can find a huge number of restaurants and taverns, shops and open markets. Mykonos is also famous for its nightlife. On the island are located discos and nightclubs for all tastes, so either rock fans, or music ... Open »
Tinos Island
One of the best places to explore the traditions of the locals isVolax. This village is one of the most secluded on the island. For many years, this picturesque place has being the center of the cultural life of the island; this is where the most experienced craftsmen live. You can see the fruits of their labor in the local folklore museum without admission fee. The main ... Open »
Naxos
Another advantage of Naxos is its spacious sandy beaches; a total length of them is over 100 km. Agios Georgios in Chora is noteworthy; it will appeal to fans of outdoor activities. Those who want to stay in silence and have serene sunbathing are recommended to go to suburbs of Chora, to Agios Prokopios. As for nightlife, fans of wild dances increasingly prefer open-air ... Open »
Naxos
One of the main attractions is Zas (Zeus) Mountain, on which, according to Greek mythology, lived the god Zeus. In close proximity is located another architectural place of interest connected with ancient myths of Greece. It is Apollo Temple, which building was finished in the 6th century BC. Today only a part of the foundation and gates have remained from that magnificent ... Open »
Syros
Numerous amazing dining places are situated in Hermoupolis, including the Kouzina restaurant. It is a great place for a family holiday; visitors can take one of the tables at the cozy lounge or sit in the picturesque courtyard. In addition to popular local treats, Kouzina offers a large selection of fine Greek wines. Another popular place is the Italian restaurant Amvix; it ... Open »
Paros
The historical center of the island is the town named Parikia, in which you will find many old buildings. In the Castro quarter you can see the protected castle that was built in the 13th century. Not far away from it you will find the temples of Demeter and Apollo. The oldest religious building of the island is Panagia-Ekatontapiliani Church, which was built in the 6th ... Open »

All about Mykonos Island, Greece - sightseeings, attractions, touristic spots, architecture, history, culture and cuisine. Prepare your trip together with OrangeSmile.com - find out the 'must see' things in Mykonos Island, which places to visit, which excursions to take, where the breathtaking views are waiting for you. Planning your trip with this travel guide will help your to get the most out of Mykonos Island in few days.