Sightseeing in Kavala - what to see. Complete travel guide 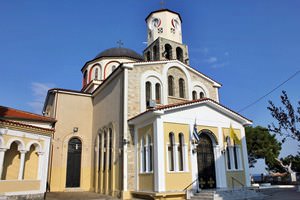 Kavala is a small port town that has just recently won love of tourists due to its magnificent beaches, well developed infrastructure and rich choice of entertaining and excursion programs.

Kavala was founded yet in the 6th century; after this the town was ruled by the Roman Empire. In 14 century it was added to the territory of the Ottoman Empire and only in 20 century Kavala became a part of Greece. To the service of guests of this wonderful place are opened several beaches that are 6 kilometers long. Most prestigious and luxurious hotels are located along the coast line. The town’s embankment is most favorite place for walking among locals and tourists. This place is particularly attractive on evenings when it is lightened by neon signs and street lamps.
Cuisine of Kavala for gourmet with top restaurants and cafe
Local cuisine is incredibly delicious and appealing. The majority of traditional dishes are nourishing and nutritious. Meat, fish, shellfish, fresh vegetables and fruit are the main …

Open
The majority of streets starts from the embankment and goes high into mountains. While walking on boulevards and valleys you can see large number of shops, restaurants and taverns. Once here were located fishing taverns that are now turned into prestigious restaurants. Cafes and taverns with open terraces are traditionally most popular among tourists as they feature stunning looks of the coast.
Any street in Kavala will bring you to the top of Simbolo Mountain. The main sight of the town – a Byzantine fort – is located there. This fort is interesting not only by its medieval halls and high towers but also by a spacious park that surrounds the building. Numerous old houses can be found is the old part of the town. Everything in Kavala simply dives in greenery and flowers. Among architectural sights of the city we should also mention Imaret built in the beginning of the 19th century by the order of Ottoman ruler Muhammad Ali. A part of the imaret is turned in to a hotel, while the second part is used to store the exhibits of Archeological Museum. Copyright www.orangesmile.com
Authentic traditions, festivals and lifestyle of Kavala inhabitants
Kavala is an ancient city, the culture of which was much shaped by various historic events that happened here since ancient times. The same applies to the national character. Kavala was an …

Open
There are a lot of interesting architectural monuments in the city. The intriguing construction is the Kamares Aqueduct. It is a very beautiful three-level arched bridge that connects the historic quarter with the new one. Looking at the majestic bridge now, it is difficult to imagine that it was built in the 16th century. The bridge was erected by order of Sultan Suleiman the First. It has a length of 280 winds, and a height of 25 meters. Until the beginning of the 20th century, the aqueduct was used to supply the city with water. Recently it underwent a large-scale reconstruction. 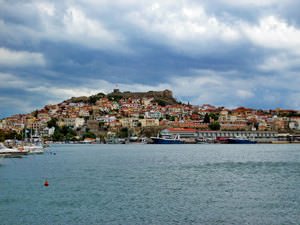 Among the religious monuments, one of the most interesting is the Baptistery Saint Lydia, located in a very picturesque area, on the banks of the River Gaggiti. The main artifact of this church is the ancient marble font, which is still used for its intended purpose. The ancient church is an important pilgrimage site. A few years ago, a kind of modest hotel in which pilgrims can stay for a few days, was opened on its territory.
Excursion over cultural sights of Kavala - 'must visit' points of interest
Kavala is a city that has a rich history and because of this fact it has many interesting landmarks that are definitely worth visiting. In the past, the city often changed its “owners”, …

Open
An incredibly fascinating event will be a trip to the Kavala Lighthouse, located at the highest point of the city. The lighthouse looks more than modest. It is a small white turret, on top of which is installed a lantern. Around the lighthouse is equipped with a spacious area, which tourists use as a viewing platform. On certain days, tourists are allowed to go inside the lighthouse and see its structure. 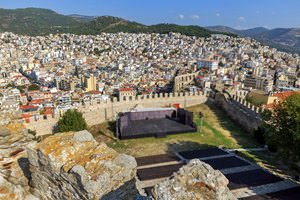 In the vicinity of the city there are several interesting archaeological districts. Here you can see the ruins of the ancient city of Amphipolis. It was founded in the 5th century BC. The city was very rich; precious metals were mined on its territory, and also forests for the construction of ships. During a study, scientists discovered unique works of art and crafts made of precious metals, which are now represented in major museums of the country. Visitors to the archaeological area will have the opportunity to admire the ruins of the once majestic palaces, and also, carefully restored antique mosaics.
Your active city break in Kavala. Attractions, recreation and entertainment - best places to spend your day and night here
Beach recreation is, of course, the main entertainment in Kavala. There is nothing strange in that as the city is located near the bay with the same name. There are beaches for any taste, so …

Open
Among the special attractions is the Tobacco Museum. The variety of its exhibits is striking; from old photographs, to the very first cigarette packs in the world. In the 19th century, the growth of Kavala was largely achieved through the production of tobacco.

This guide to iconic landmarks and sights of Kavala is protected by the copyright law. You can re-publish this content with mandatory attribution: direct and active hyperlink to www.orangesmile.com.
Kavala - guide chapters 1 2 3 4 5 6 7 8

City tours, excursions and tickets in Kavala and surroundings

Survived castles around Kavala
♥   Castle 'Kavala Castle' Kavala, 1.3 km from the center. On the map

♥   Castle 'Stavronikita monastery-fortress' Mount Athos, 75.4 km from the center. On the map

♥   Castle 'Ouranoupolis Tower' Ouranoupolis, 76.9 km from the center. On the map

♥   Castle 'Xenophontos monastery-fortress' Mount Athos, 78.1 km from the center. On the map

♥   Castle 'Simonopetra monastery-fortress' Mount Athos, 84.3 km from the center. On the map

National and city parks around Kavala
♥   National Park 'Ethniko Parko Oroseiras Rodopis' , 48.6 km from the center. On the map

Sights around Kavala from our guide 'Extreme places on Earth' 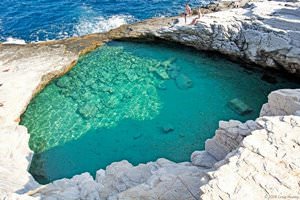 Distance from Kavala center - 45.6 km.
However, the lagoon is not empty. Curious tourists who want to take spectacular memorable photos visit it every day. Part of the large natural pool is located under a canopy. The lagoon is much larger than it might seem at first glance. Many beautiful legends are associated with the picturesque lagoon. The locals gave it a romantic unofficial name – "Aphrodite's Tear". According to one of the legends, Zeus created this picturesque pool for his beloved Aphrodite. … Read further

Search touristic sites on the map of Kavala

Sightseeing in regions nearby Kavala

Thassos
Despite its relatively small popularity Thassos is a modern and beautiful city. The local hotels and entertainment centers here are as good as centers in well-known resort areas. Best beaches and restaurants are located in the eastern part of the town. You will also see several medieval buildings here. Agora is by far the most interesting area for tourists. Here are located ... Open »
Flogita
Among other notable buildings and monuments of this place you are recommended to visit White Tower, Aristotle Square, the Triumphal Arch, Church of St. Demetrius and Byzantine walls. Each of these objects has its own legends and stories of the past centuries, so they are visited by hundreds of tourists every day. This resort is perfect for families with children. There is an ... Open »
Bansko
Until the beginning of the 20th century, the town was one of the largest and most important settlements of the Ottoman Empire. In 1912, after the First Balkan war, it became a part of independent Bulgaria. The historical part of Bansko is in a great condition; therefore, fans of excursions will enjoy a stroll along lovely and charming old streets and see magnificent buildings ... Open »
Thessaloniki
The most popular excursion in Thessaloniki is, without a doubt, a trip to White Tower built in the middle of the 15th century. You should definitely visit the old Acropolis and see the remains of the fortification wall, which was built in the times of Byzantine Empire. Learn about the history of the city and its most significant events in the Archaeological Museum, which ... Open »
Lemnos
A part of Lemnos that is closer to Turkey, the place where once has existed Troy, is the location of Poliochni. Actually, this town has been founded before Troy. In 2100 BC a great earthquake damaged the island greatly and almost destroyed this town. After the disaster the town was abandoned and renovation works wasn’t conducted until our days. Now this is a sight of ... Open »
Limnos Island
The first capital of the island, Moudros, offers rich excursion programs. There are well-known historical monuments literally on every street. The Church of the Annunciation, the amazingly beautiful and harmonious architectural monument, is particularly notable. A few years ago, the old Cossack cemetery was restored in Moudros; it’s of great interest from an architectural ... Open »

All about Kavala, Greece - sightseeings, attractions, touristic spots, architecture, history, culture and cuisine. Prepare your trip together with OrangeSmile.com - find out the 'must see' things in Kavala, which places to visit, which excursions to take, where the breathtaking views are waiting for you. Planning your trip with this travel guide will help your to get the most out of Kavala in few days.