Sightseeing in Chalkida - what to see. Complete travel guide 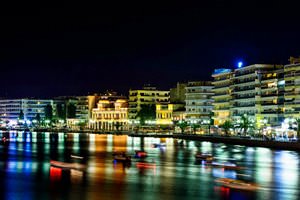 This is a city with a long history and a beautiful resort, which provides guests with wide range of activities and excursions. In addition to delightful beaches, parks and reserves, vacationers are welcome to visit modern sport centers and amusement parks. Gourmet tourists will definitely enjoy many restaurants, and shopping lovers will find much pleasure in making a walk in the malls of this city.
Archaeological Museum, which is located in the central region of Chalkida, is surely one of those sights that cannot be missed. The collection of exhibits and artifacts present in the museum is mostly got from excavations in Evia. You can even look at the work of archaeologists and see the ruins of ancient cities if you visit the local archaeological complex. It is located a few kilometers away from the city; here scientists have found the traces of settlements that belong to approximately 29 - 23 centuries BC.
Among the medieval buildings of this place you simply cannot fail to visit Church of Holy Paraskevi. Many centuries ago the temple of Artemis stood on the site of the basilica. This church is considered one of the earliest Christian monuments that have appeared on the territory of Greece. The temple has witnessed numerous historical events. During the war with Turkey the church has been turned into a mosque; later it has been used as a military warehouse and barracks. Only after this the church was named after St. Paraskevi - the patron saint and protector of Chalkida. Copyright www.orangesmile.com
In the northern part of the city is the location of a beautiful building -Red House, which once has belonged to a noble Mallios family. You will see an embankment near the house. This is one of the most popular places for walks among both locals and tourists. This is just a small part of numerous notable places that guests will be offered to see in Chalkida. You may also find much fun visiting the Ethnographic Museum, St. Nicholas Church, Art Gallery, Church of St. Demetrius, Karabala Castle and Emir Zade Mosque. 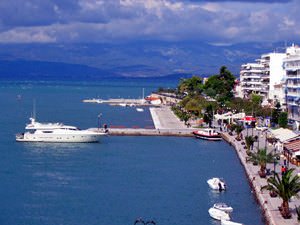 In the city, there is the picturesque historical Castro District where you can see interesting constructions of different time periods. When walking here, you can admire fascinating buildings in Venetian style and monuments of the times of the Turkish reign. In this district, there is the old Emir Zade Mosque that was founded in the 15th century and is still open now. The mosque houses a lot of interesting religious artifacts.
The bright historical monument of the 17th century is the Karababa Castle that was built to protect the bay. Huge ancient bastions have been preserved to this day and have a breathtaking panoramic view of the city and its surroundings. These places are often visited not only by curious tourists, but also by professional photographs. 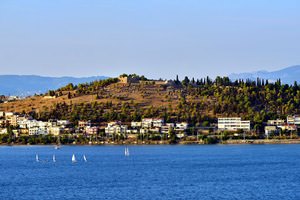 In the city, there are a lot of modern attractions, among which the suspension bridge is worth being mentioned. It was constructed in 1993 and now is one of the most photographed sites of Chalcis. The Old Bridge is no less interesting for tourists who always have an opportunity to admire great waves here. They literally boil under the bridge. This is due not only to the construction’s features, but also to the fact that the bridge is built in the narrowest part of the bay.
The picturesque embankment of Chalcis stretches along the coastline for several kilometers. It is a perfect place for leisurely strolls and evening entertainments. There are a lot of traditional Greek restaurants and inexpensive cafes. On the embankment, you can also find multiple stalls with gifts. Near the embankment, there are natives’ beautiful houses where travelers can take part in an unusual entertainment. Local guides give interesting tours around these houses. The natives here are famous for incredible kindness and hospitality. 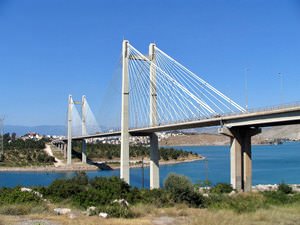 Chalcis is also very popular with adherents of food tourism, as there are some of the best national restaurants of Greece. Not far from the Old Bridge is the enchanting tavern called O Giannis located. It is famous outside the town too. The tavern is private. Its owners work as cooks here and offer its visitors to taste the most popular seafood delicacies. They fish themselves too. As a supplement to the meal, the visitors of the tavern are offered to taste exquisite wine from nearby wineries.
This guide to iconic landmarks and sights of Chalkida is protected by the copyright law. You can re-publish this content with mandatory attribution: direct and active hyperlink to www.orangesmile.com.

City tours, excursions and tickets in Chalkida and surroundings

Survived castles around Chalkida
♥   Castle 'Castle of Chalkis' Chalkis, 0.4 km from the center. On the map

National and city parks around Chalkida
♥   National Park 'Ethniko Parko Schinia Marathona' , 51.6 km from the center. On the map

Sights around Chalkida from our guide 'Extreme places on Earth'

Distance from Chalkida center - 55.9 km.
The construction of the amphitheater was completed in 165 AD. In the course of the last reconstructions, only a multicoloured marble facing and several statues were renovated. All other elements of architecture are perfectly preserved from the time of construction, which allows guests of the ancient theater to fully enjoy its pristine grandeur. The best time to visit the sights is a period from June to September, when the annual Athens Festival takes place. During this period, interesting performances and concerts in the amphitheater are held literally every week. … Read further

Distance from Chalkida center - 55.9 km.
As in ancient times, the gorgeous building is clearly visible from any part of the city. Locals carefully preserve this historical landmark. It is forbidden to erect high-rise buildings in the city in order to maintain a clear view on the territory of Athens. Travelers who want to stroll through the ancient part of Greece will be able to see the carefully restored Parthenon, several reconstructed temples, and the ancient theater, as well as temples of the Greek gods. … Read further

Search touristic sites on the map of Chalkida

Sightseeing in regions nearby Chalkida

Evvoia Island
Chalkida is the capital of the island. A few hundred years ago there was an ancient settlement on its territory. Today it’s a large-scale modern metropolis with many historical monuments concentrated in Castro District. There are unique buildings built during reign of the Venetian Empire. Old mosque built in the 15th century is among the most prominent attractions of the ... Open »
Eretria
Small Greek town named Eretria, which is located on the Evia (Euboea) Island, has been known since ancient times. Large number of various monuments relating to ancient times and later periods has made this place a very popular resort among tourists from all over the world. Indeed, in addition to amazing sea rest, the stay here allows receiving truly unforgettable experience. ... Open »
Athens
The Parthenon is one of the greatest architectural sights in the world. The architects took into account all peculiarities of the human eyesight and made all the corners of the building a little bit round. This deliberate curvature coupled with the unequal distance among the columns has created an impression of a total harmony. All the lines seem to be irreproachably horizontal ... Open »
Sporades Island
Sporades archipelago is situated along eastern Greek coast in Aegean Sea. The archipelago is split in two independent island groups, Southern and Northern Sporades with northern islands being most popular among the tourists. The archipelago is known for its unique nature with national reserves on nearly every island. There are also thousands of historical landmarks across the ... Open »
Skopelos Island
There are very unusual attractions on the island, including Sendoukia Graves. Graves are located high in the mountains; their name is very conventional, as the exact purpose of these structures is unknown. The exact age of the tombs is unknown too, but they remain one of the most visited tourist sites on the island. The highest point in North Sporades, Delphi Mountain, can be ... Open »
Loutraki
Loutraki is an amazing Greek city located on the coast of the Gulf of Corinth. It is always very sunny here, and tourists will find in Loutraki numerous beautiful beaches and clear water. As a resort town Loutraki is famous for its high-quality service. This is also one of the most famous destinations for medical tourism. Currently Loutraki is a worldwide famous therapeutic ... Open »

All about Chalkida, Greece - sightseeings, attractions, touristic spots, architecture, history, culture and cuisine. Prepare your trip together with OrangeSmile.com - find out the 'must see' things in Chalkida, which places to visit, which excursions to take, where the breathtaking views are waiting for you. Planning your trip with this travel guide will help your to get the most out of Chalkida in few days.